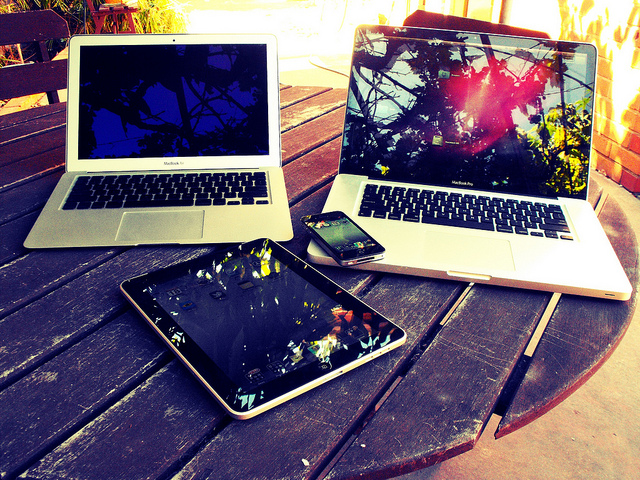 Ever since a modified version of OS X found its way onto an unannounced smartphone way back in TBI (Time Before iPhone), it’s been almost inevitable that the world of iOS and Mac would collide.

That time could come as soon as next year, according to one analyst…

Jefferies & Co. analyst Peter Misek tells Barron’s that he expects Apple to unify the worlds of Mac OS X and the iPhone, iPad and iPod touch’s iOS, and that we could see this come to fruition as soon as 2012/2013.

The trojan horse? Apple’s 2012 MacBook Air, which Misek believes will use Apple’s own quad-core A6 CPU as a replacement for the current Intel-produced i5 and i7. This would bring the Air in line with whatever iPad and iPhone is around at the time, meaning three could all, theoretically, take advantage of the same operating system.

With OS X Lion featuring more iOS features than we care to count (upside-down scrolling, LaunchPad etc) it’s already beginning, and the Air’s instant-on capabilities make it the perfect partner for the transition.

The iMac and Mac Pro ranges would join the fun in subsequent years, but the Air would be the machine to bridge the gap between iPad and MacBook Pro, perhaps even replacing the latter eventually.

The reason for the move is simple: content deals and interoperability, at least if you believe Misek.

“Users want to be able to pick up any iPhone, iPad, or Mac (or turn on their iTV) and have content move seamlessly between them and be optimized for the user and the device currently being used. We believe this will be difficult to implement if iOS and OS X are kept separate”

It all makes a worrying amount of sense, but do we really want iOS on our Macs? Is that even what we’ll eventually get?

It seems much more likely that the Mac will become home to an operating system that is still OS X-like in the way it functions, but its underpinnings could be re-tooled for running on the new A6 CPU.

As 9to5Mac points out, this is already happening in Redmond, with Microsoft attempting to turn Windows 8 into an operating system for all occasions — no tablet, desktop, smartphone notebook will be safe from the grasps of Microsoft’s latest and greatest.

Is it really possible Apple could be following suit?