Not to be outdone by indie devs’ massive game sale, Apple has launched a pair of prominently advertised promotions on both the App Store and the Mac App Store, in time for your extended Memorial Day weekend. The new Editors’ Choice section offers great apps for both iOS and Mac platforms cherry-picked by Apple’s iTunes team.

Also, Cupertino (finally) pulled an Amazon with the other section, giving away one free app every week, starting today…

As a result of these changes, the Staff Favorites section is now a goner.

At the time of this writing, two iOS and two Mac apps claimed bragging rights concerning the Editors’ Choice distinction: Deus Ex: Human Revolution – Ultimate Edition and Cobook for the Mac and freshly-released Facebook Camera and Extreme Skater on the iOS front.

As for the Free App of the Week section, Apple kicked off the promotion by offering Chillingo’s cute puzzle game Cut the Rope: Experiments free of charge, otherwise a 99-cent download. 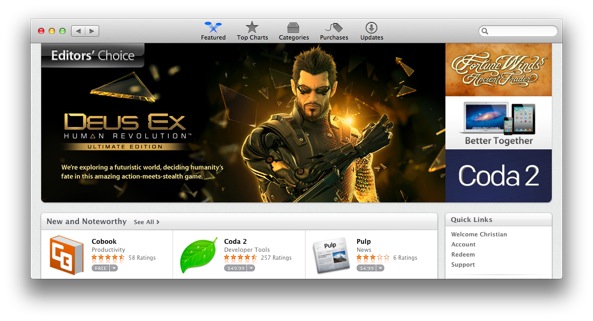 Speaking of Cut the Rope, Experiments was just updated with 25 new levels and Cut the Rope HD got crisp Retina-optimized graphics that looks really nice on the new iPad.

Unfortunately, the new sections don’t solve discovery issues, but here’s to hoping that Apple will pull some tricks come June 11 based on its acquisition of app discovery startup Chomp.

I sure hope the freebie thing won’t be temporary and that Apple will continue giving away one free app every single week.

So, Cut the Rope: Experiments.