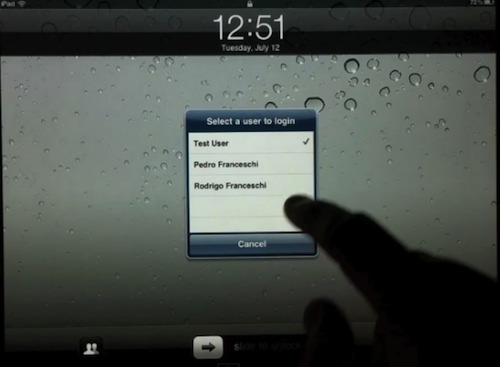 Ever since Apple unveiled the original iPad, consumers have been clamoring for multiple user support. Such a feature would allow users to setup individual profiles with custom wallpapers, preferences, and other settings.

The jailbreak community has tried to fill this void with tweaks like iUsers. But without iTunes support, among other issues, they’ve failed to make much of an impact. Luckily, it appears that Apple is working on the issue…

AppleInsider passes along an email, from Apple, to an iOS developer who recently submitted a bug report regarding the missing multi-user feature. Here’s the response he received:

This is a follow up to Bug ID# [redacted]. After further investigation it has been determined that this is a known issue, which is currently being investigated by engineering. The issue has been filed in our bug database under the original Bug ID# [redacted]. The original bug number being used to track this duplicate issue can be found in the State column, in this format: Duplicate/OrigBug#.

Thank you for submitting this bug report. We truly appreciate your assistance in helping us discover and isolate bugs.

The site also notes that Apple is said to have been working on multi-user support for its tablet since 2010, experimenting with such features as user recognition via the iPad’s front-facing camera, and inter-profile, shareable sticky notes.

With the iPad becoming more popular, and in some cases, replacing the home PC, you would think Apple would have to address this issue sooner rather than later. It’ll be interesting to see if/how they manage to implement the feature.

What do you think, does the iPad need multi-user support?