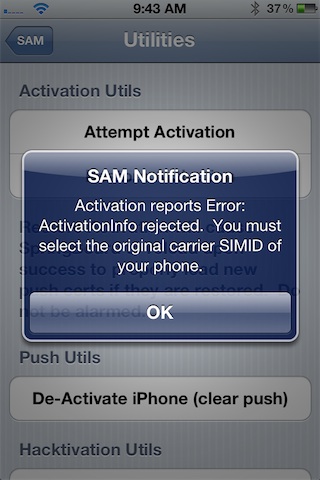 Many readers are reporting that — as suggested last night — Apple has fixed its issue with its activation server that the SAM unlock method relied on.

I’ve tested the tried and true unlock method that I posted yesterday, and indeed, it’s not working for me either.

For those that did successfully use the SAM tool to unlock your iPhone before today, congratulations. Now we just hope that you are proactive enough to backup your activation ticket either manually, or via RedSn0w…

We won’t declare the SAM unlock 100% dead since there’s still no official word from the iPhone Dev Team or others intimately involved with the project, but judging from the comments on our YouTube channel, the comments on the unlock post, my own attempts to unlock, and various comments around the web, it’s pretty clear that the unlock is no longer working as it once did.

What has your experience then thus far? Were you able to get in before it was too late?