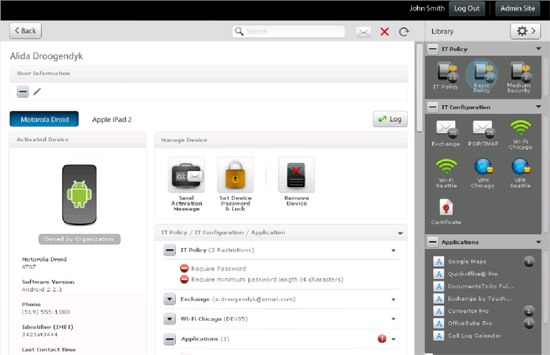 Among the features is built-in support for tablets and smartphones running Apple’s iOS and Google’s Android software.

So that’s what this job vacancy was all about…

According to a company blog post, iPhones, iPads and iPod touches are supported, as well as Android-drive smartphones and tablets. In addition, the new tool works with RIM’s own BlackBerry 7 and earlier smartphones (including BlackBerry 10 smartphones in the future) and the PlayBook family of tablets.

Among the list of features aimed at IT managers is the ability to detect jailbreak exploits and roots, deploy apps, enable access to enterprise services, activate and configure devices and profiles for various phones and more.

I have a feeling that this particular software release by RIM is a tad too late. The company is in its death spiral now. Worse, there’s no end in sight to their financial woes and market share loss.

Had they supported rival platforms two years earlier, they might have been able to slow down the rise of the iPhone and iPad as go-to corporate tools for mobile workforce, at the expense of BlackBerrys.

And the iPhone might not have been able to beat BlackBerry in RIM’s home turf so easily.

And yes, they should have ported the popular BlackBerry Messenger tool over to iOS for the sake of long-term gains.

Is it game over for RIM already?