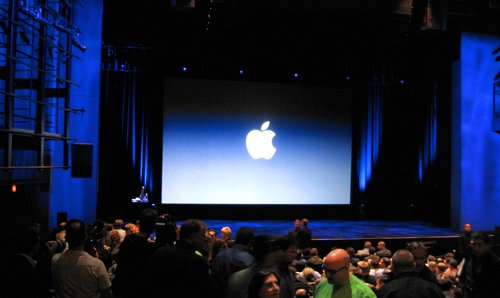 Apple is sitting on top of the world right now. It has the most popular handset and tablet on the market, it broke nearly every company sales record last quarter, and it’s currently the most valuable corporation in the world.

The company’s real accomplishment, however, is how quickly it has risen to the top. Less than two years ago Apple’s market cap was only $200 billion. And now it’s teetering around the $500 billion mark. But how long can it keep up this ridiculous pace?

The New York Times recently published an interesting report regarding Apple and its unprecedented growth and success over the last 5 years. The article explains that Apple could soon be going up against the law of large numbers:

“Also known as the golden theorem, with a proof attributed to the 17th-century Swiss mathematician Jacob Bernoulli, the law states that a variable will revert to a mean over a large sample of results. In the case of the largest companies, it suggests that high earnings growth and a rapid rise in share price will slow as those companies grow ever larger.”

Several companies have fallen victim to the law, including Cisco and Microsoft — both of which were rated the most valuable companies in the world at some point, and are now down hundreds of billions of dollars from their peaks.

The reason for this? It’s simple. Once companies have maxed out their opportunities in their competing markets, they can’t continue to grow unless they enter new ones. Sure, Apple’s smartphone and tablet market penetration is minuscule compared to what Microsoft Windows was at its peak (close to 90%). But what about in 5 years?

The point is that all of Apple’s recent success has been a direct result of it introducing new products: the iPod, the iPhone, and more recently the iPad. For the company to continue growing at its current rate, it would either have to figure out some way to substantially increase the sales of those devices, and maintain that, or it would have to unveil an entirely new product.

Rumors seem to point to the latter scenario, as there has been a lot of gossip over the past several months indicating that Apple would soon unveil its own TV set. Pundits and analysts alike seem to think that the Cupertino company is looking to enter the TV market sometime in the near future. But as usual, we’ll believe it when we see it.

Do you think Apple needs to create an entirely new product? If so, what would you like to see?