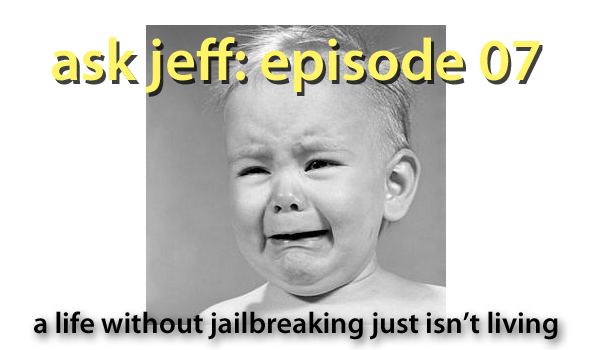 As many of you know, I’ve been an avid jailbreaker of my iPhone ever since it was announced that jailbreaking was officially legal.

True, I never really thought the whole “illegal” aspect had a leg to stand on in the first place, but I do my best to play within the rules.

Now that jailbreaking has become a part of my life, a viewer inquires about the possibility of it going away as time moves forward. I consider this prospect, and many other questions in Episode 07 of Ask Jeff…

As always, if you want your question considered on next week’s episode, leave a comment below, or on the video’s comments.

I wholeheartedly look forward to answering as many of your questions as I can! Got one?