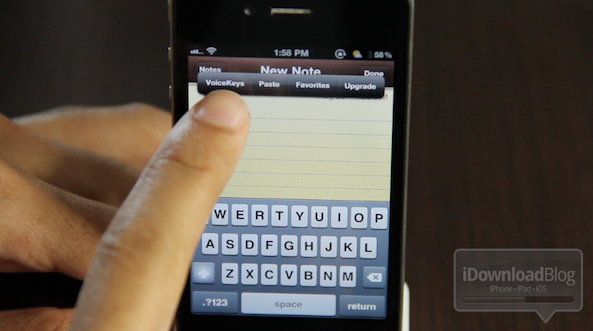 VoiceKeys is a brand new jailbreak tweak from Ryan Petrich, that attempts to bring easy to use speech-to-text to the iPhone.

In order to make the tweak as seamlessly integrated as possible, Ryan opted to use the already popular Action Menu as a means to invoke the speech recognition properties.

The result thus far has been sort of a mixed bag, but keep in mind that this is only version 1.0 of the tweak. Check inside for a video demonstration of VoiceKeys in action…

VoiceKeys utilizes Google’s speech recognition, and thus it requires an internet connection to translate your spoken voice into text.

As you can see from my video demonstration, the recognition isn’t really up to par thus far. I’m not sure if this is an issue with Google’s speech recognition, the tweak itself, or a combination of the two.

Given Petrich’s track record though, I’d say the tweak is bound to be optimized and improved in the future.

Have you tried out VoiceKeys? What do you think about it so far?