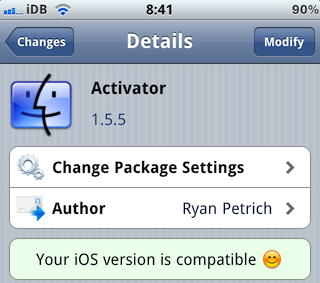 Activator lets you assign activation gestures to any application. A common example of this is swiping the status bar left or right to bring up SBSettings. It can be highly customized and best of all, it’s free. Chances are if you already have some common well known jailbreak tweaks installed, Activator will already be on your device.

Next time you open up Cydia, Activator’s 1.5.5 update will be waiting for you…

Activator’s update includes a bug fix for security, however the most notable change is that Activator now supports Comex’s jailbreak.

Something to note is that this is the first time I’ve seen a tweak updated to support a jailbreak itself. It’s common to see updates for compatibility when a new firmware is released, however seeing an update solely for the release of a new jailbreak is something I personally haven’t come across very often.

The reason why I love Activator so much is that I hate using the physical buttons on my iPhone. A combination of other popular jailbreak tweaks in conjunction with Activator solves this annoying issue for me.

These examples show the raw power of what Activator is capable of, and although it’s been around for a while, its one of the reason’s why I love jailbreaking.

Whats your thoughts on the latest Activator update? What setup do you have for Activator that you would like to share? Let us know in the comments.