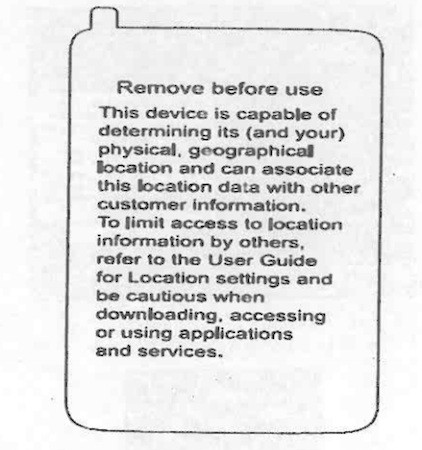 Want to buy a new phone from Verizon? Well now you’ve got yet another sticker to contend with upon purchase.

From this point forward all new phones sold from Verizon will include the label above, which warns users that the devices have the ability to determine your geographic location.

Now I know what you’re probably thinking; Verizon’s just trying to cover their butts in light of Apple’s recent mobile phone tracking scandal; I thought the same thing too.

As it turns out, it just happened to be really good timing, as you’ll see inside…

Now let’s not get it twisted, Apple’s recent iOS 4 tracking drama isn’t the first and surely won’t be the last bit of outrage over tracking in general. In fact, you might remember the article we posted about a lawsuit stemming from app tracking during December of last year.

That and other prior complaints coerced the New York Times to run an article about app tracking, and that’s what brought the situation to the attention of State Representative Ed Markey.

Rep Markey in turn sent a note to all of the major carriers expressing concern about the issue, and this label is the result of that dialog. All of this went down near the end of March, well before “tracker-gate” was made public.

I’m sure that if Verizon was hesitant about doing this at first, they aren’t anymore. They probably see this as a way to omit themselves from any class action lawsuits stemming from the public outrage over Apple’s tracker-gate scandal.

For the record, Apple has denied any deviousness behind iOS’ tracking capabilities.

What do you think? Do you think a label is enough to put this issue to rest?