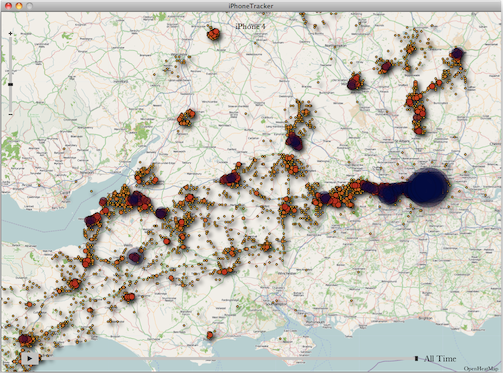 Most of you are probably aware that the iPhone can track your location. We’ve all seen the box pop up that says “Facebook would like to use your location data,” and then you tap Allow or Cancel.

But how many of you knew that the iPhone constantly tracks your location and records your coordinates alongside a time stamp to a secret file? I assumed that police might have access to that kind of info through my wireless carrier, but I didn’t know it was sitting in a file on my phone…

The Guardian is reporting today that scientists have discovered a disturbing file within iDevices using iOS 4.0 and up. Pete Warden and Alasdair Allan are presenting their findings at the Where 2.0 conference in San Francisco today, and it will certainly be interesting to see how the industry responds.

The research group has worked on several location data visualization projects like the map of radiation levels in Japan. They’ve even researched other smartphones, including Google’s Android devices, for similar invasions of privacy. No other mobile OS that they’ve come across, logs a user’s location data like iOS.

Warden and Allen note that the file is moved onto new devices when an old one is replaced, and don’t believe that to be by accident. They speculate that Apple might have new features on the way that utilize the hidden data, but the absence of a notice to users or a setting to disable the tracking shows a real ignorance about privacy.

Not only could it be considered ignorance, it might be against the law. The Regulation of Investigatory Power Act says that standard consumer phones cannot record location data.

Want to see the hidden data for yourself? Head on over to Pete Warden’s GitHub page here. At the top you’ll notice a place to download the application called iPhone Tracker.

It’s just a simple app that pulls the location data out of your saved iPhone files and displays the coordinates on a map. For those interested, Warden answers a full list of FAQ and breaks down how to locate the secret file yourself through file browsing.

Why is this such a bad thing? Obviously it’s not a good thing that jealous spouses and other inquiring minds have such easy access to a history of your recent travels, but the question of why this information is being recorded still remains.

I’m indifferent I guess because I rarely restore from old backups, and jailbreak frequently. When I tried the iPhone tracker, there was only location data from the last week or two.  But I certainly see that there is an issue here, especially after all that trouble Google got in over its Latitude services.