The Camera+ fiasco has been an interesting one to follow. The popular photography app was a sensation when it was first released in the App Store. Then, it was pulled. Just like that. The app was updated with a backdoor to allow a volume button camera shutter, which apparently Apple didn’t like.

At the time of it being pulled, Camera+ was considered the crème de la crème of photography apps. Most felt as though Apple should have lightened up on Camera+ by not pulling the app for simply adding a cool and innovative feature. The problem was that Camera+ violated Apple’s guidelines on how an app can interface with the iPhone’s controls.

We recently reported that Camera+ had announced that its return to the App Store would be very soon. After many months of silence, Camera+ is back and better than ever…

The team at tap tap tap really knows how to make great software for the iPhone. They obviously took their time over the app’s dead period to listen to all of the feedback they received from customers. In this major, 2.0 update, the app’s design has been completely overhauled. 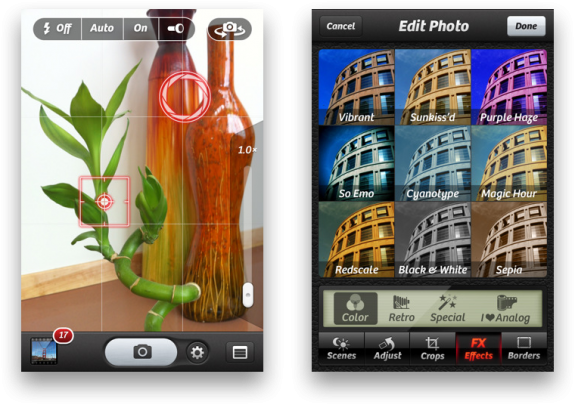 The first change you’ll notice when you open the app is that the retro SLR screen gimmick is gone. While it was a nice homage to the photography world, it was a UI hindrance for getting to the actual camera.

Touch focus and touch exposure (both really cool features of the app’s prior version) are updated to be more usable. A zoom slider, flash control (iPhone 4 only), stabilizer, timer, and photo burst mode make the camera itself a compelling enough replacement for the default iOS camera app.

Overall, the speed of the app has been greatly improved. Start-up times are much quicker, and animations are snappy and responsive. The “Lightbox” has been updated with menus and more sharing options. The original problems in the sharing options have been fixed and the overall process has been significantly improved. 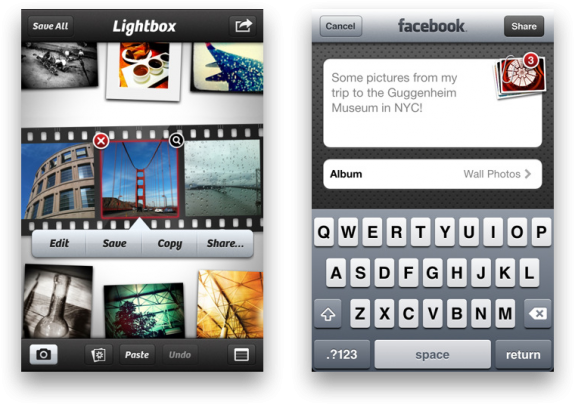 There are a tons of new effects, borders and scene modes to use on photos. In-app purchasing of more effects has been added, starting with the “I ♥ Analog” pack (which I love). Effects can now be previewed and adjusted with a slider before they are applied to photos, which is a very nice addition.

Camera+ 2.0 is a huge update. There were a total of 53 new additions to the app along with many bug fixes. After playing with it for a little while, I think it’s safe to say that Camera+ is back on its throne of the ultimate, all-in-one photography app. I know that there are still many Instagram fanatics out there, but Camera+ 2.0 takes the cake for me.

Pick up Camera+ 2.0 for a limited, reduced price of $0.99 in the App Store. If you already purchased Camera+ before it was pulled, the update is free.

If you’re interested, tap tap tap has a nice walkthrough of the new features of Camera+ 2.0 on their website.

What do you think of this Camera+ update? It’s my go-to camera app. Is it your favorite photography app for the iPhone?