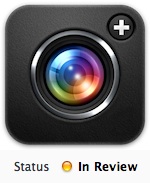 The entire situation that went down with Camera+ probably ranks near the top as one of the weirdest events of 2010 for iPhone owners. This rings especially true if you happened to own or were considering purchasing Camera+ at the time of its banishment.

Essentially the story went like this, tap tap tap — the app’s developer — snuck in a hidden method to enable the volume buttons to function as physical shutter buttons for the iPhone’s camera. Apple didn’t like this, and as expected, removed all traces of Camera + from the App Store…

What’s odd is that tap tap tap was completely mum over what happened, not so much as a peep. They even kept their advertising for the app up on their website, and even kept the link to the spot where the app once resided on the App Store.

Well, that all seems to be coming to an end. A weird end, but an end nonetheless. tap tap tap reports that Camera+ is now in review by Apple, and its re-release is imminent. 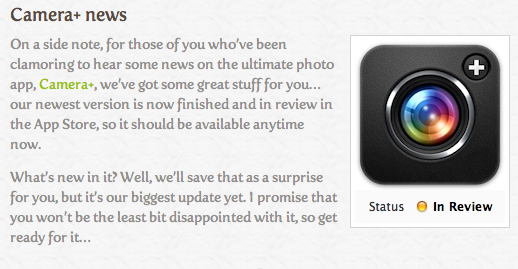 Even better is the fact that they claim that this is their biggest update yet. Fine, but in the meantime the app has lost a lot of market share, and it’s likely that some of those features are already being done by competing apps. We shall see.

Maybe Apple imposed a suspension on the app, and enough time has passed where it would be allowed back on the App Store. Who knows, but I think it’s a strange story; one that we’ll probably never learn everything about.

Are you glad to see Camera+ back in the App Store?