Released just over two years ago, the checkra1n jailbreak has proven to be particularly resilient because of the hardware-based checkm8 bootrom exploit that powers it. The checkm8 exploit targets A7-A11 devices (up to and including the iPhone X), and due to being hardware-based, Apple can’t patch it for those devices already in circulation. 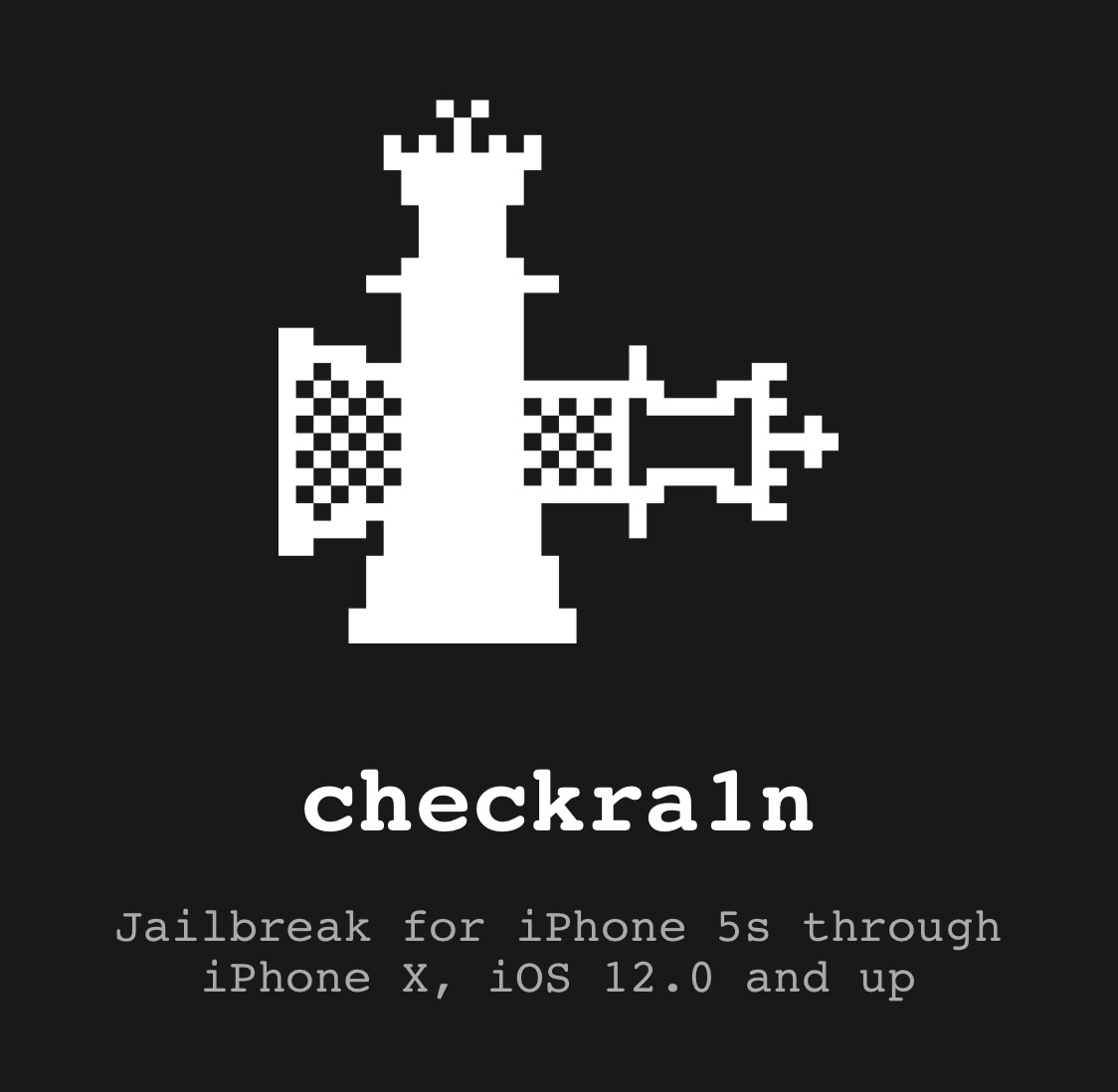 While checkra1n currently only ‘officially’ supports up to and including iOS & iPadOS 14.5.1 on its face, the cool thing about this jailbreak is that the developers integrated a powerful option that lets users jailbreak even some unofficially supported version(s) of iOS or iPadOS, so long as the device in question sports an A7-A11 chip. In this case, that would mean that checkra1n can jailbreak iOS 14.6-14.8.1 as well, with a few additional steps.

Since the question of how to do this comes up frequently, we’ll take this opportunity to discuss the capability and what it means for you as a checkra1n user.

But there’s a reason why we say “almost any” version of iOS or iPadOS instead of saying “any” version, and that’s something that we’d like to clarify in this piece.

The latest version of checkra1n, which at the time of this writing is version 0.12.4, natively supports iOS & iPadOS 12.0-14.5.1 right out of the box. However, here’s the plot twist: I used checkra1n to jailbreak my iPhone X running iOS 14.8.

How can this be, you ask?

When you attempt to plug in a supported device with an unofficially supported firmware, checkra1n recognizes the device, but displays a message along the lines of, “Sorry, iPhone X is not supported on iOS 14.8 at this point,” just as shown in the screenshot example below: 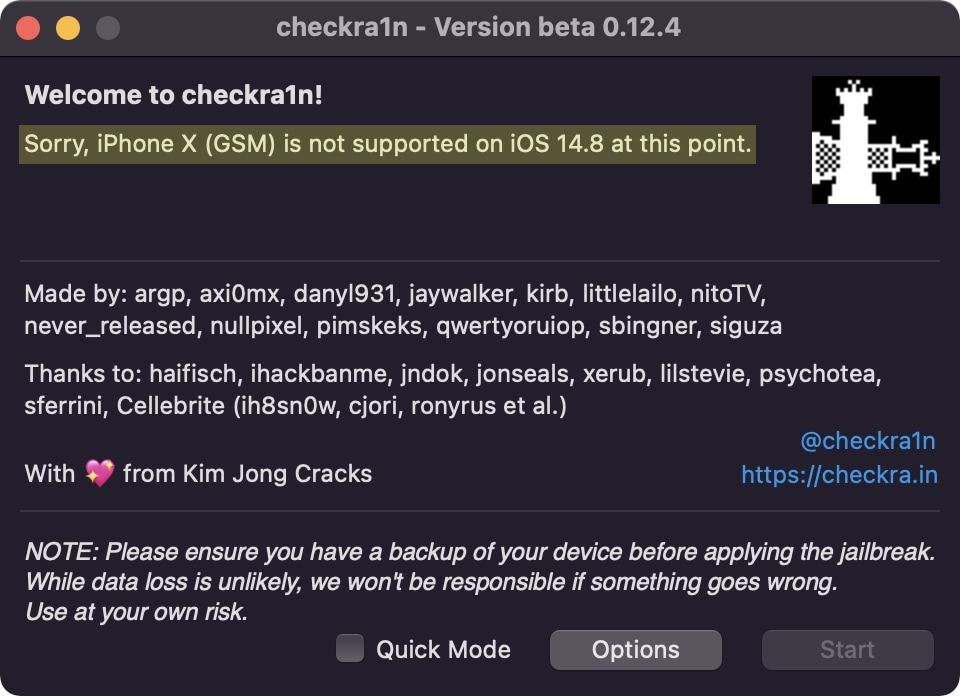 If you run into this problem yourself, then you should click on checkra1n’s Options button and add a check mark to the “Allow untested iOS/iPadOS/tvOS versions” box, like so: 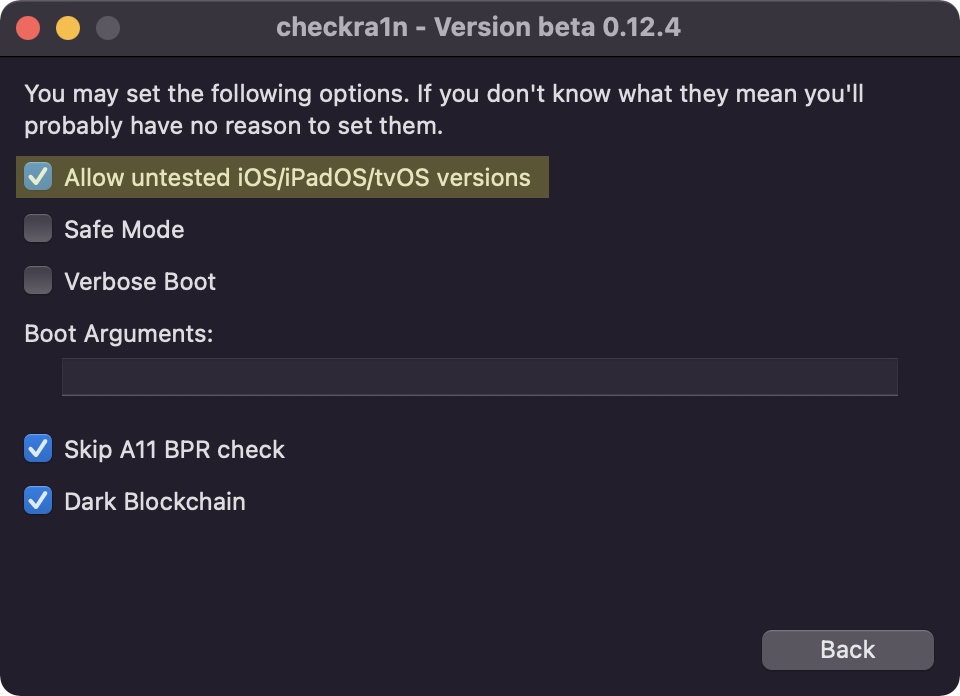 IMPORTANT NOTE: If you’re using an A11 device (iPhone 8, 8 Plus, or X), then you must also check the Skip A11 BPR check option before proceeding. These devices will not have access to biometric or passcode authentication if jailbreaking them on iOS or iPadOS 14 with checkra1n, and while that may sound alarming to many users, a jailbreak tweak dubbed lockdown can help alleviate some of your concerns.

Now when you return to checkra1n’s primary interface, a longer message that says something like, “iPhone X (iOS 14.8) connected in Normal mode. WARNING: iPhone X on iOS 14.8 is only partially supported, continue at your own risk” will appear: 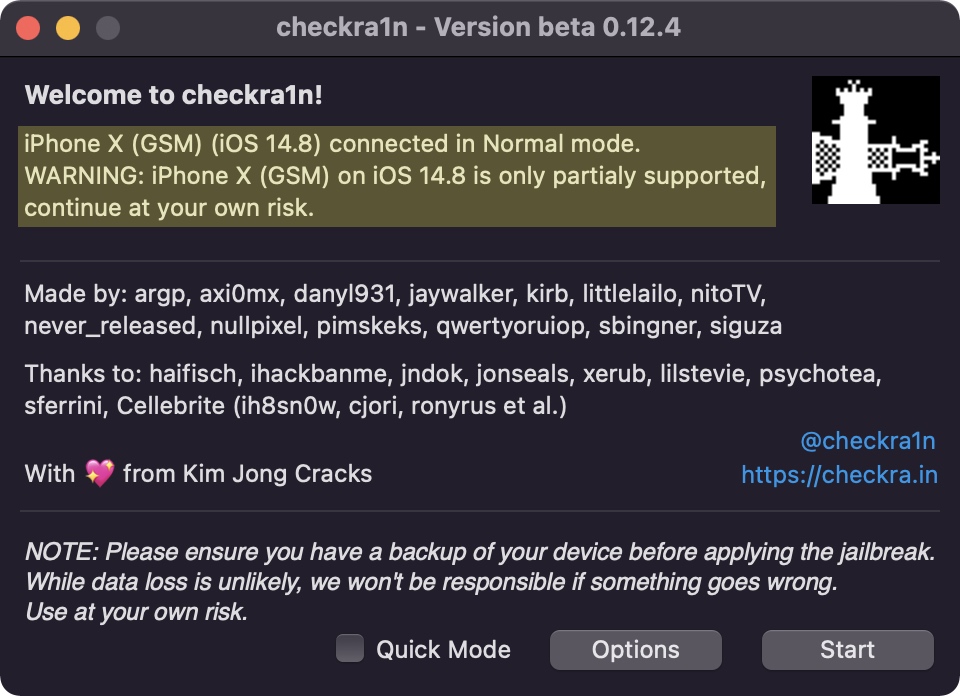 At this point, you’re free to move forward with your jailbreak on iOS or iPadOS 14.6 through 14.8.1; of course, you do so at your own risk. The reason is that checkra1n hasn’t been officially updated to support these versions of iOS or iPadOS, however I can tell you from personal experience that it works just fine, at least on iOS or iPadOS 14.8.

If you’re wondering about how to jailbreak iOS or iPadOS 15 with checkra1n, then you should keep reading…

Since prospective checkra1n jailbreak users can effectively jailbreak newer version(s) of iOS or iPadOS without waiting for updates that add official support, why do we say “almost any” firmware instead of “any” firmware?

Basically, while checkra1n works flawlessly with all versions of iOS & iPadOS 12.x-14.x on A7-A11-equipped devices, the same can’t be said about iOS & iPadOS 15.x on those same devices. At least not yet…

iOS & iPadOS 15.x introduced new security mitigations that necessitate additional finagling on the checkra1n team’s part to circumvent, and while iOS & iPadOS 15.x haven’t blocked the un-patchable checkm8 bootrom exploit from working, they do interrupt other parts of the jailbreak process, and that’s why checkra1n needs to be updated again.

We know from Discord chat discussions that iOS & iPadOS 15 support is being worked on and should come to checkra1n in the future, however we don’t currently have any sort of ETA for when that might happen. In fact, iDownloadBlog has been told that while work is underway, it’s not currently a priority.

Having said that, the “Allow untested iOS/iPadOS/tvOS versions” trick we showed you above only works with A7-A11-equipped devices running iOS & iPadOS versions 14.6-14.8.1.

Its a good trick to know, especially if you haven’t already been taking advantage of it.

If your A7-A11-equipped handset is running iOS or iPadOS 15 right now, then checkra1n can’t currently jailbreak your device.

Again, this is not because the checkm8 bootrom exploit has been patched, but rather because Apple has interrupted the current jailbreak process with new security mitigations. It’s a lot like adding barricades to a sidewalk; the only way to proceed would be to circumvent the barricades. With that in mind, the checkra1n team needs to adjust the jailbreak tool’s logic to get things up and running again.

Anyone who is using a supported handset running iOS or iPadOS 15 at this time should stay patient and avoid installing any further updates. This is because staying on the lowest possible firmware is always advised for prospective jailbreakers.

It’s likely that checkra1n will be updated to support A7-A11 devices running iOS & iPadOS 15 in the future, however it’s equally possible that a different jailbreak will pick up support for the version of iOS or iPadOS 15 you’re using before then.

We simply don’t yet know how this will play out, so it’s important to play your cards right and be ready if and when a jailbreak picks up newfangled firmware support. Don’t be that guy who continuously updates and then misses their chance to jailbreak later down the road…

Knowing how to use the checkra1n jailbreak’s unofficially supported firmware feature comes in serious clutch, as can let you have your cake and eat it too with respect to installing certain new security patches and still having a jailbreak, even when the checkra1n team doesn’t get around to updating the tool frequently enough.

On the other hand, it’s important to remember that checkra1n needs an update to support iOS & iPadOS 15 because of additional roadblocks put in place by Apple.

Have you used checkra1n to jailbreak any version of iOS or iPadOS newer than 14.5.1 with the feature discussed above? Be sure to let us know how it went for you in the comments section down below.