The Odyssey Team officially released an updated version of the iOS & iPadOS 14-centric Taurine jailbreak tool on Thursday in the form of version 1.0.7 to address a serious issue that could result in boot looping, and consequently, data loss and/or forced software updates.

The updated Taurine jailbreak tool comes several weeks after the Odyssey Team issued a public service announcement warning jailbreakers who depend on this particular jailbreak to downgrade from version 1.0.6/1.0.5 to version 1.0.4. Doing so would have mitigated the issue, as this particular version was less likely to trigger the bug, which was reportedly present in the operating system itself.

News about the updated Taurine jailbreak tool was shared via the Odyssey Team’s announcement channels Thursday morning, including the official @OdysseyTeam_ Twitter page and the Sileo / Taurine / Odyssey Discord channel: 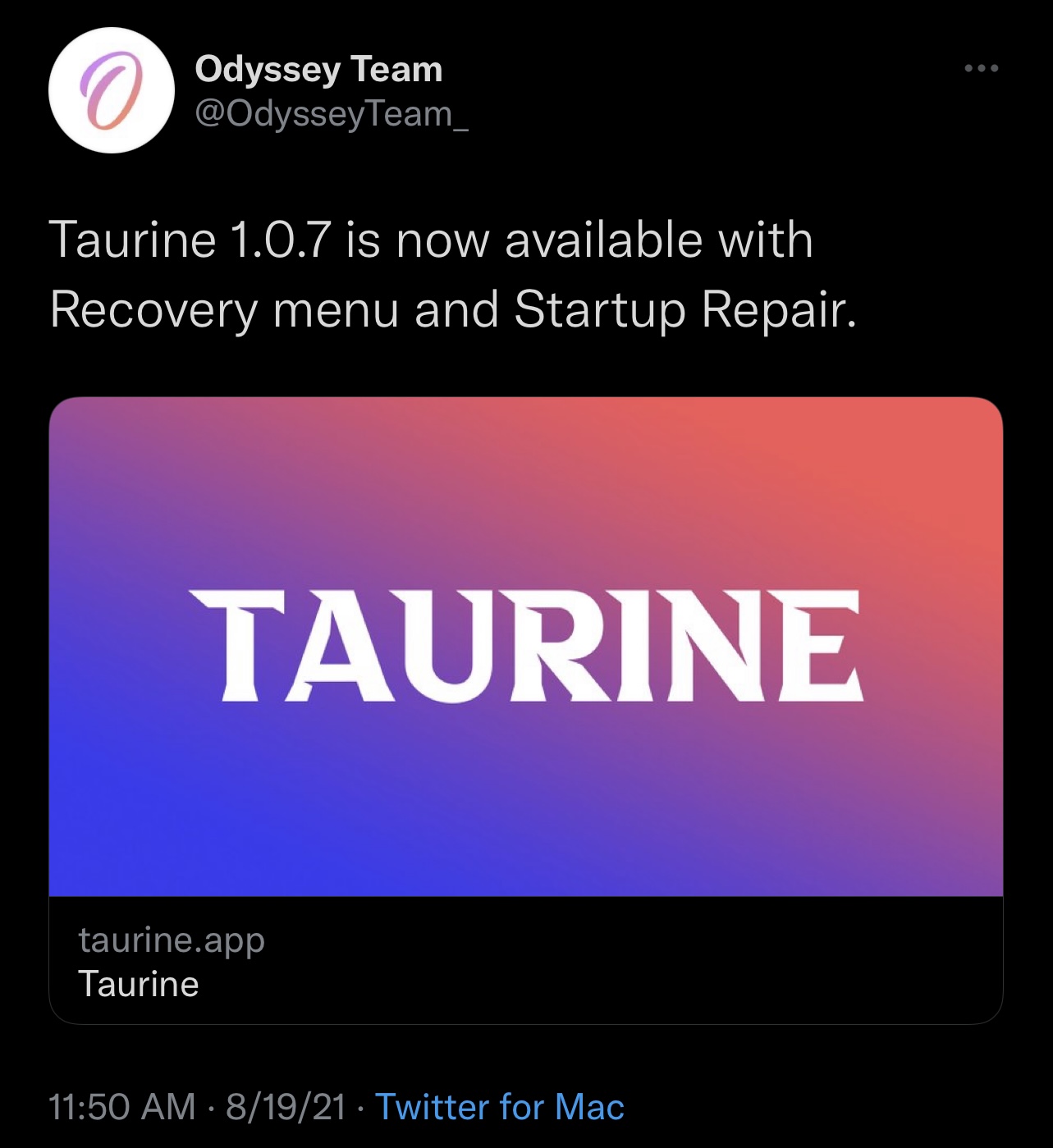 It’s worth noting that this version of Taurine has been available to the general public in the form of a public beta of sorts by way of jbupdate, but today is the first day that an actual .ipa file has been made available on the Taurine website for anyone to download. Today’s move signals a successful testing period.

Based on the announcements made over the past several weeks while Taurine v1.0.7 was in testing, today’s update incorporates a built-in mitigation for the issues mentioned above, which help prevent damage from boot loops on users’ devices rather than exacerbating the iOS & iPadOS bug that allegedly triggers them.

Taurine v1.0.7 also incorporates a new Startup Repair option in Taurine Recovery, which can help you get back on track without losing any data or your jaikbreak if you experience the boot loop issue:

The full change log for Taurine v1.0.7 can be found below:

– Startup Repair will fix any bootloop issues caused by a file being corrupted during userspace reboot
– Recovery menu can be manually activated by adding /.libhooker_recovery to your root folder and then initiated via a userspace reboot

According to Odyssey Team lead developer CoolStar, several important discoveries materialized from the team’s extensive research into the boot loop and BSOD problems, including:

If you’re an existing Taurine jailbreak user, then it is strongly recommended that you download and install the latest version of the tool to ensure that you’re better protected from boot loops and the dangerous potential for data loss or forced software updates as a result.

As always, the latest version of the Taurine jailbreak tool can be had from the Taurine.app website and our detailed tutorial walks you through the process of jailbreaking your iOS or iPadOS 14.0-14.3 device with Taurine.

Have you updated your version of the Taurine jailbreak to v1.0.7 yet? Let us know why or why not in the comments section down below.