Taurine jailbreak users may want to backtrack their jailbreak from version 1.0.5 or 1.0.6 to version 1.0.4 pending an announcement shared early Wednesday morning by Odyssey Team member @23Aaron_.

In the announcement, which was echoed on in several different places including the Sileo / Taurine / Odyssey Discord channel, the @OsysseyTeam_ Twitter page, and even on /r/jailbreak, we learn that these versions of Taurine (1.0.5 and 1.0.6) exacerbate an issue in stock iOS that can result in data loss and forced iOS updates.

We also learn that the issue isn’t as pronounced for Taurine v1.0.4 users and that it likely affects other jailbreaks such as unc0ver too (albeit unconfirmed by Pwn20wnd). It has consequently been advised that Taurine users immediately back up their data (in case of data loss) and switch to Taurine v1.0.4: 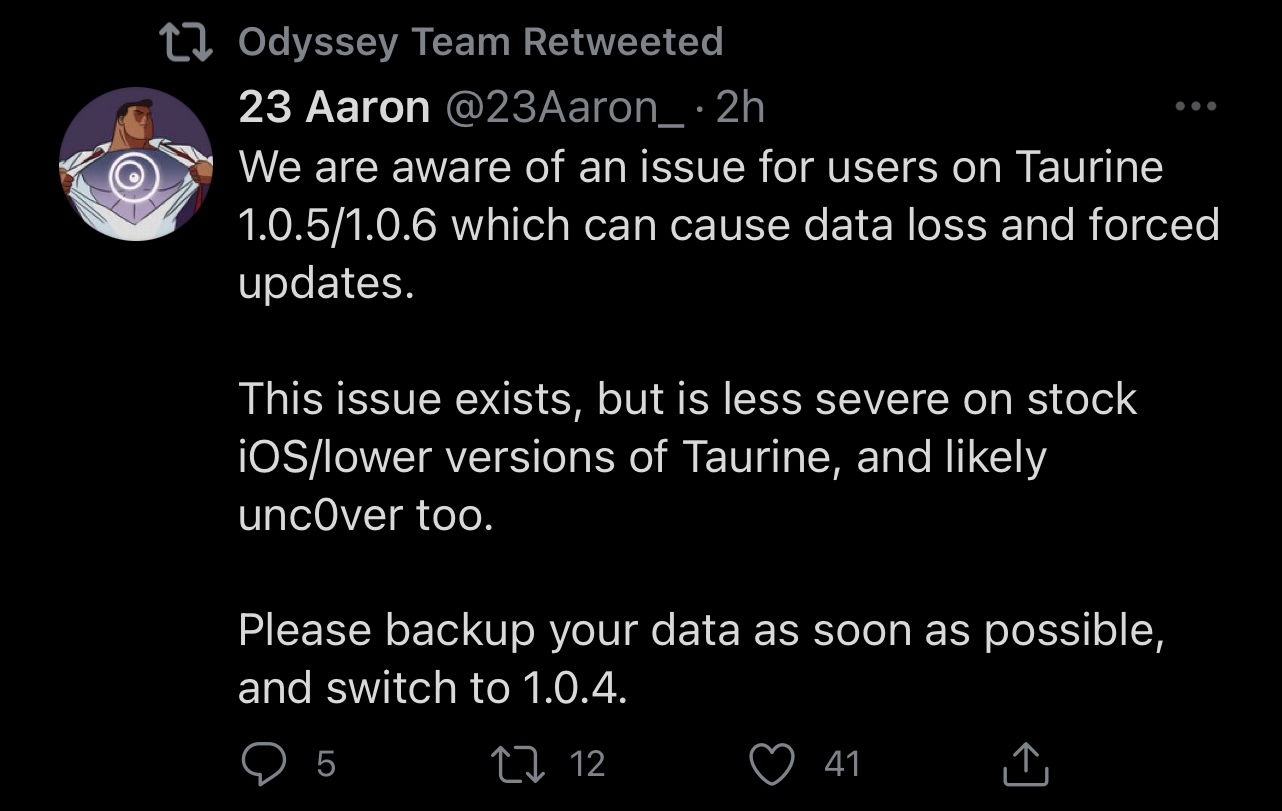 Since the issue appears to be present in stock iOS, it would be difficult to fix on the Odyssey Team’s end. The best they may be able to do is incorporate mitigations to prevent it from becoming a widespread issue among users, but it remains to be seen what action will be taken in the long run.

If anything’s certain, it’s that the changes in the Taurine v1.0.5 and 1.0.6 updates make it more likely that the end user will experience the aforementioned issues. That appears to be the primary reason behind why Taurine v1.0.4 is being recommended, as this version doesn’t increase the odds that these issues will be encountered.

While running an older version of the Taurine jailbreak with fewer features and bug fixes than the latest release(s) probably isn’t what most Taurine users want to hear, it’s the most advisable step to help preserve device stability.

Taurine v1.0.4 is available from the Taurine.app webpage and should not be downloaded from any other source.

We’re sure that we will continue to hear updates from the Odyssey Team as they investigate the issue further. As always, we’ll keep our readers apprised of any new developments.

Have you experienced the data loss and/or forced update issues described by the Odyssey Team after using the latest version(s) of the Taurine jailbreak? Let us know in the comments section down below.