I’ve been running some unscientific tests for the past few days, essentially stalking myself with an AirTag that was set up using an Apple ID other than mine. The goal was to find out how quickly I would get notified about someone tracking me, but I was also curious about what the process would be to alert me about it.

After several days of tracking myself, this is what I found out.

I set up a brand new AirTag using an Apple ID completely unrelated to my personal Apple ID. Using a test iPhone running a test Apple ID, I was quickly able to set up the AirTag and register it to that test device.

I then turned off the test iPhone so that it would not be connected at all to the test AirTag. The reason is that if the AirTag is still within Bluetooth range from its paired iPhone, the tracking alert might never be triggered because it wouldn’t be characterized as “found moving with me” but rather found around its actual owner.

I think it’s important to note that the setup was created in my house at around 5 PM. That night, I took the AirTag with me and put it on my nightstand. I expected to get a tracking alert the next morning as I wake up.

“AirTag found moving with you” notification

Roughly 12-13 hours after I had set up the AirTag, I woke up thinking my first alert would be on my phone, but it wasn’t. At around 6 AM, I went for a walk, and when I returned home, I was greeted with the following notification on my iPhone.

This notification may or may not have been accompanied by a sound alert. If it did, I didn’t hear it. Props to Apple for figuring out that I was being tracked, but I find it odd this notification showed up only after I got home. And this is, by the way, something I was able to verify when conducting other similar tests. Every single time I was being notified, I was potentially being tracked when arriving home.

If you tap the notification shown above, you are taken to the Find My app, where you are given more details about what’s going on. Very clearly, the app shows a safety alert telling you your current location can be seen by the owner of an AirTag. The app also tells you the AirTag may be attached to an item you are borrowing and that you may want to disable it if it’s not something you authorized.

If you tap Continue from the screenshot above, you are now presented with a map view of where exactly the AirTag tracked you. As you can see from this image below, the AirTag tracked me from my house, all the way around my neighborhood walk, and back to my house. It looks like the AirTag was pinging my location every 2 to 3 minutes.

On other tests I conducted, such as a long drive from the California desert back to my house, it seemed AirTag was pinging my location every 10-15 minutes. 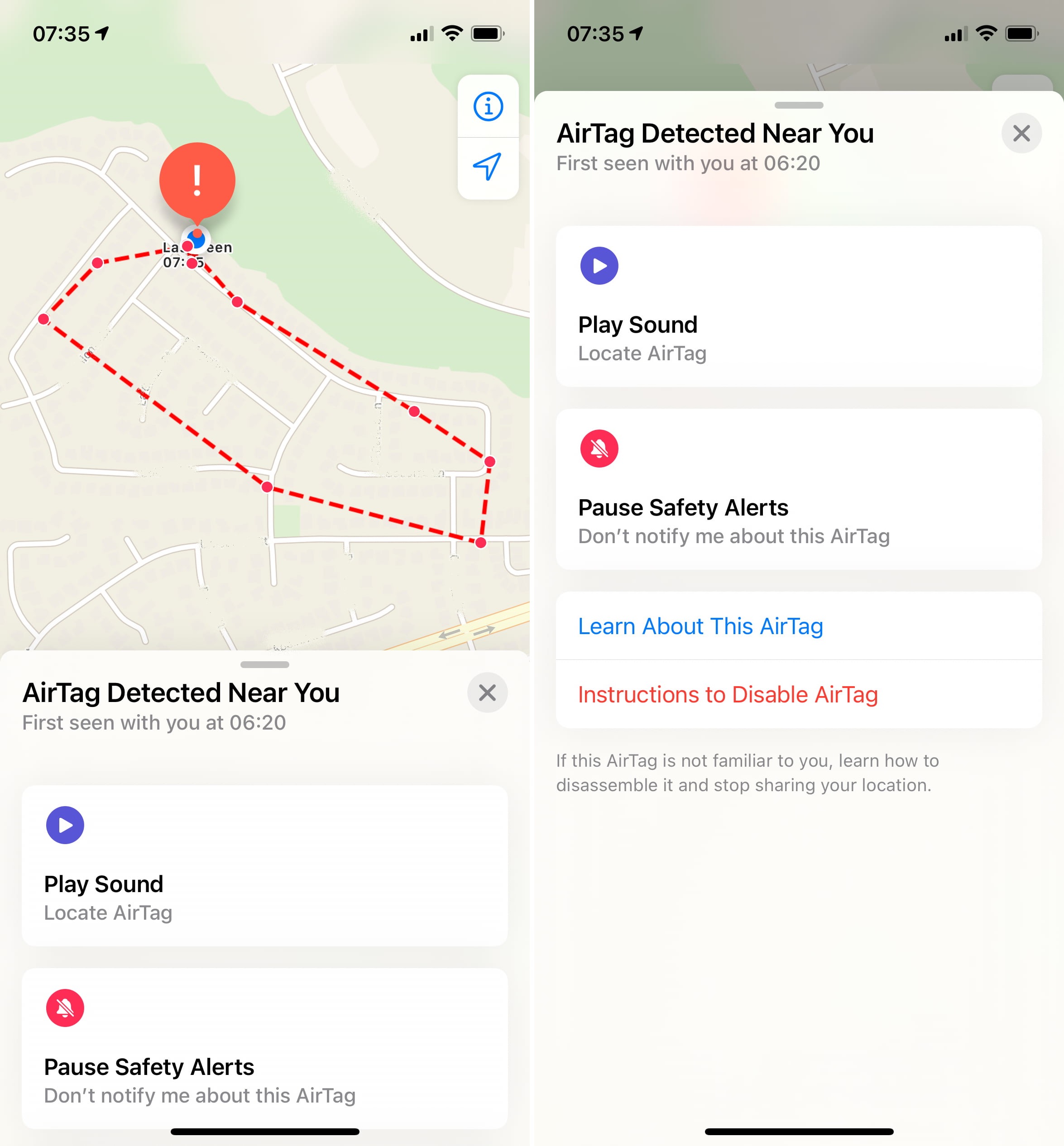 From here, you can use the Play Sound button to play an alert on the AirTag, which would theoretically help you locate it.

If you know of this AirTag (i.e., it is attached to keys a friend let you borrow), then you can choose to Pause Safety Alerts and stop being notified about this AirTag.

You are also given a couple of other options that may be useful.

First, you can Learn About This AirTag. By placing the top of your iPhone above the AirTag, a notification pops up, which takes you to found.apple.com where the serial number of the AirTag will be displayed. 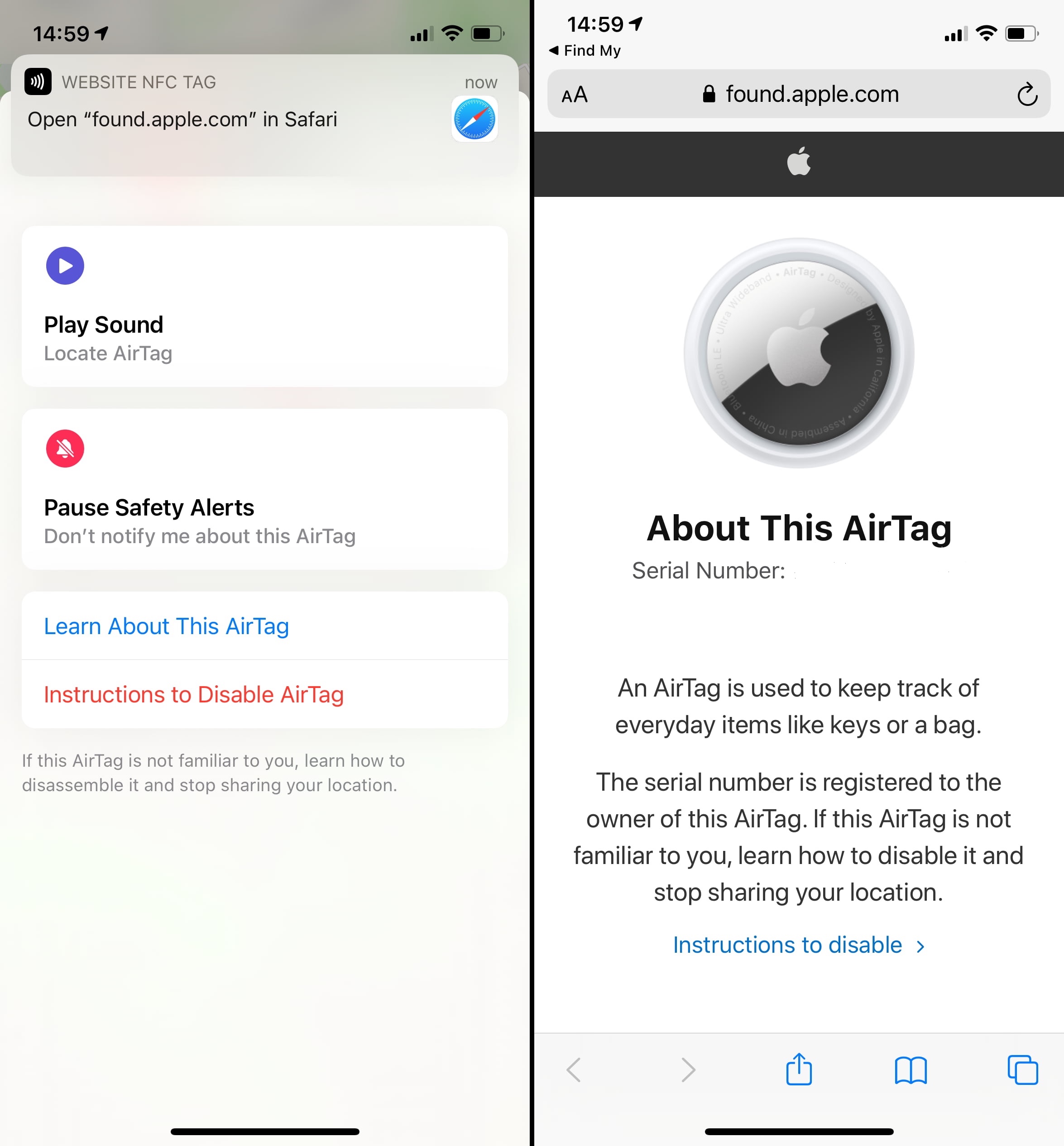 You can also get Instructions to Disable AirTag, which displays instructions on how to remove the battery and completely deactivate the AirTag.

Apple is pretty light on details, but a Washington Post report suggested that an AirTag starts a three-day countdown once it’s separated from its owner’s iPhone. After three days, and assuming the AirTag didn’t connect to its paired iPhone during that time, it will start sounding an alarm for 15 seconds. It will then pause for several hours and sound the alarm again for 15 seconds. That alarm was measured by the Post to be at about 60 decibels.

This three-day countdown is reset anytime the paired iPhone is connected to the AirTag. So, in theory, if someone wanted to track you, they would have to make sure that every three days, their iPhone gets in Bluetooth range of the AirTag to reset the countdown to the alarm.

I never actually heard anything coming from the AirTag other than the time I manually selected to “Play Sound” from the Find My app. The alarm most likely chirped, but I didn’t hear it. And I know for sure that the paired iPhone didn’t connect at all to the AirTag during that time because the paired iPhone was turned off entirely during the whole experiment.

The fact that I didn’t hear the alarm even though the AirTag was in my pocket or on my desk speaks a lot about the usefulness of this alarm.

What to do if you’re being tracked against your will

If you find yourself in the situation demonstrated above, the best thing to do is to immediately scan the item to find out more details about it. After all, you might have inadvertently been tracked, and maybe someone lost this AirTag, and you can help find it.

But if the situation is clear that you are being tracked (i.e., the AirTag is in your purse), then you should go ahead and deactivate that AirTag immediately. We wrote a pretty comprehensive tutorial on what to do if an unknown AirTag has been found moving with you.

Notify me before I get home

I understand that your home location is something your iPhone knows, but why wait for me to be at my house to tell me someone is likely tracking me? If that person was trying to find out where I live, then this person would have succeeded, and I would have been alerted about it once the damage was done.

I believe there is room for improvement regarding when and where these alerts should be sent, and in my opinion, it should be before you get home. Your iPhone knows your frequent locations, so in theory, it could use all of that smart AI to alert you when it thinks you’re on your way home.

I am a neat freak, and I keep my Notification Center as clean as my underwear, so when I get a notification, I see it, and I clean it up promptly. But not everyone is like me. My significant other, for instance, lives in a mad world where her Notification Center is just an ongoing collection of notifications of more or less importance. Would she have seen that “AirTag found moving with you” notification? Honestly, I highly doubt it. I have the sense that the majority of people are like my wife. They have notifications they don’t really pay attention to or even notice.

That’s why notifications of unwanted tracking should be improved. My suggestion is three-fold:

If the goal of the alarm is to raise attention, then it should run at more frequent intervals. I don’t have an exact number in mind, but I believe the alarm should ring for at least a few minutes every hour.

Are AirTag notifications and alerts perfect? Certainly not, but this is definitely a step in the right direction. Considering how new this class of product is (sorry, I don’t even put Tile in the same category), Apple is learning as it goes and will likely take measures to fine-tune the experience.

Because Apple controls the entire software/hardware/services stack, the company could release a firmware update to address some of the points I make above or those raised by other users. I’m confident Apple will learn a lot and take user feedback into account to ensure that AirTags, despite their intrinsic purpose, will not infringe on people’s privacy.