Shortly after the unveiling of the brand-new cicuta_verosa kernel exploit for all devices running up to and including iOS 14.3, renowned jailbreak developers and hackers began investigating its viability.

While much of the initial spotlight shined on Odyssey lead developer CoolStar to create an iOS 14-compatible jailbreak with the novel cicuta_verosa exploit, it seems that even Brandon Plank, another name that resonates positively with the jailbreak community, will be going hands-on with it. 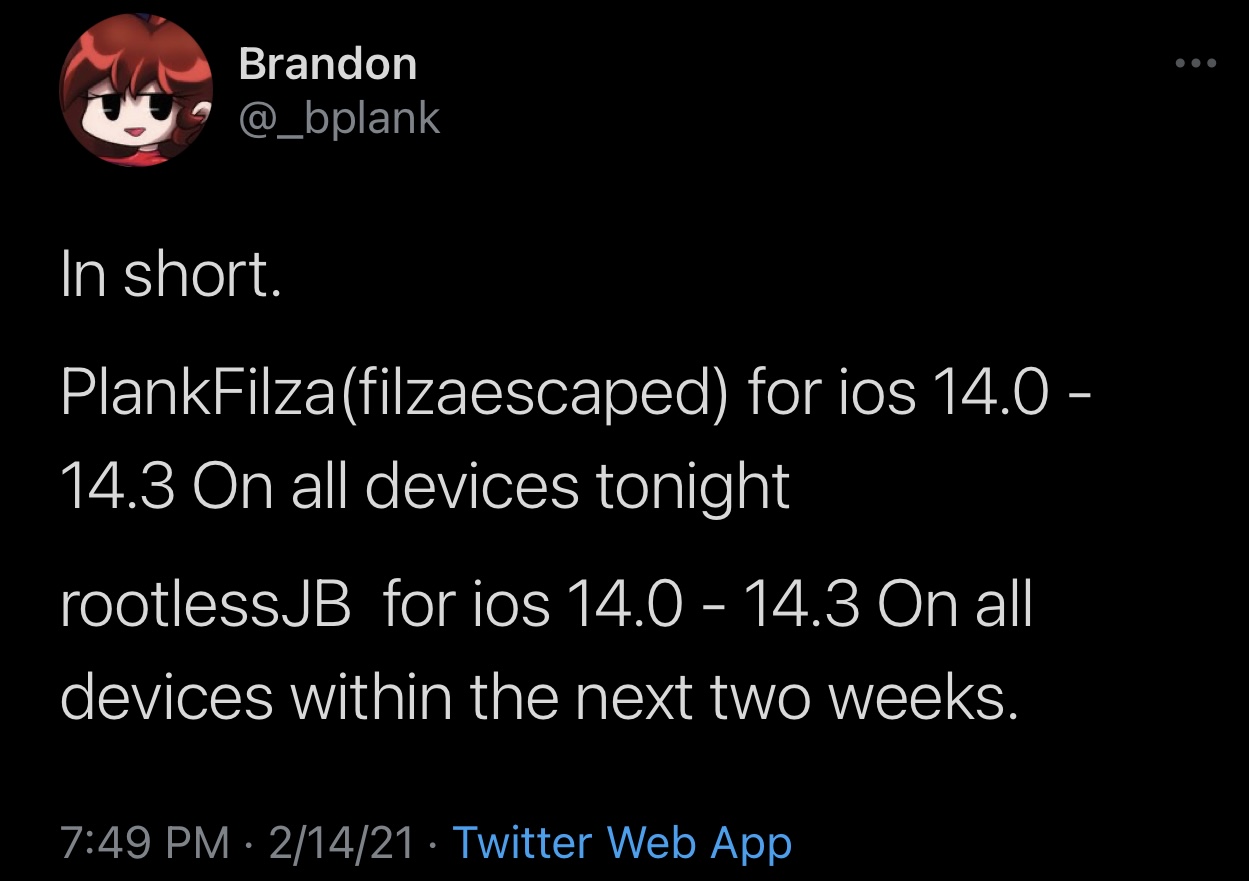 At the time of this writing, PlankFilza for iOS 14.0-14.3 has already been released, so the remaining elephant in the room would be the mention of the upcoming iteration of rootlessJB with full compatibility for iOS 14.0-14.3.

For those unfamiliar with the rootlessJB, it’s nothing new. The concept has been around for more than a couple of years, and it’s essentially a developer-focused jailbreak that avoids entanglements with the handset’s root filesystem.

RootlessJB doesn’t come with a package manager like Cydia or Sileo out of the box, but instead incorporates SSH capabilities, which offers a means of remotely accessing the device’s filesystem over a secure network connection for the purposes of modification. This is effectively how a user would tweak such a device, as opposed to installing a tweak from a package manager on a more typical type of jailbreak.

Given that rootlessJB doesn’t offer access to the root filesystem, these types of jailbreaks are more restrictive than their full-fledged counterparts. Consequently, not all tweaks and add-ons work on them and they’re not intended for everyone; but they can be an effective way for tweak developers to prepare tweaks for iOS & iPadOS 14, assuming they haven’t already been able to via checkra1n.

As always, we steer clear from recommending these types of jailbreaks to the general public, but rootlessJB can be an asset to tweak developers and experienced iOS tinkerers. The average Joe would instead be advised to wait for a full-fledged iOS 14.0-14.3 jailbreak with root access, much like what Odyssey or unc0ver currently offer on iOS 13.

From what we’ve been able to gather already, Odyssey lead developer CoolStar will be working on a full-fledged iOS 14.0-13.4-compatible jailbreak based on the cicuta_verosa exploit. Although it’s being referred to as Odyssey14 currently, such a jailbreak is expected to receive an entirely different name upon release. It’s unknown as of now if any other jailbreak developers are working to utilize the latest exploit.

Are you excited that a new generation of rootlessJB may only be a couple of weeks away from release? Let us know down in the comments section below.