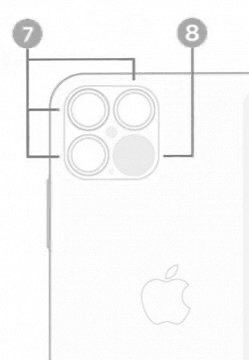 Word on the street is that Apple is going to bring another LiDAR Scanner to a future Apple-branded product, and this time around it could be an iPhone.

To get there, it might take some rearranging of the triple camera setup on the back of the iPhone 12 and iPhone 12 Pro — the names of the oft-rumored models expected to arrive later this year. And that’s basically the gist of the image you can see at the top of this article, which was shared online by Twitter user @choco_bit, but was originally published by Concepts iPhone (via 9to5Mac) before the end of March. The image appears to come from a user manual of some sort.

In the image we can see that Apple has changed the camera layout in order to fit the new LiDAR Scanner. Instead of having two cameras installed one over the other and then the third just off to the right, we can see the cameras now taking up the top-left, top-right, and bottom-left rounders corners in the square layout. And then, in the bottom-right there is the LiDAR Scanner, the new addition to the show.

You’ll get the typical flash, but it’s repositioned into the middle of the camera setup, dead center between the cameras and the new sensor. The microphone is near the bottom edge. But, as you can see, the rounded square design is sticking around for at least one more year. And the wide angle, ultra wide, and telephoto lenses will be the go-to cameras this year as well.

There have been a lot of rumors swirling around about the 2020 iPhone lineup for quite some time already. Most recently analyst Ming-Chi Kuo released a research note that said the new iPhones will feature a bigger sensor and sensor stabilization. We’ve heard that Apple may redesign the iPhone this year, too, bringing back a metal frame similar to what the company introduced with the iPhone 4 years ago.

The company is expected to launch four new iPhone models later this year, each of which with an OLED display. The smallest of the bunch will feature a 5.4-inch OLED display, while there will be a pair of 6.1-inch OLED iPhones added to the mix as well, one outfitted with two rear cameras and the other with three rear cameras. The 6.1-inch model with three rear cameras will also feature a LiDAR Scanner. And finally, at the top of the ladder is a 6.7-inch OLED iPhone with a LiDAR Scanner.

We’re expecting to see Apple unveil and launch the new iPhone lineup sometime this fall. However, there was a report earlier this year that suggested suppliers are being informed a delay for Apple’s 5G-enabled 2020 iPhones isn’t out of the question. That was promptly denied, though, so –for now– it sounds like everything is still on pace.

Are you looking forward to the new 2020 iPhone models with a LiDAR Scanner?