Apple today refreshed its flagship iPad Pro models, bringing even more pro features such as a two-lens rear setup that includes wide and ultra-wide cameras and, for the first time in any Apple device, a sophisticated LiDAR sensor that can map your surroundings in 3D. The company also unveiled a new Magic Keyboard accessory designed specifically for this new iPad Pro that features a floating design, backlit keys and a built-in trackpad which lets you perform Multi-Touch gestures to navigate the entire tablet without ever lifting your hand.

The refreshed iPad Pro models look the same as previous ones they’ve replaced. Under the hood, however, it’s a whole different story.

What you get is the highest performance ever in an iPad.

A first for any Apple device to date, the new iPad Pro integrates a sophisticated laser-based LiDAR sensor on the back. Unlike infrared-based TrueDepth module that can capture depth data reliably at up to 20 inches away, the new LiDAR sensor can measure the distance to surrounding objects up to 5 meters away, allowing for a more detailed understanding of a scene.

It will power enhanced augmented reality experiences, with existing apps that use Apple’s ARKit framework automatically getting these improvements “for free”:

And with a new Scene Geometry API, developers can tap the sensor to deliver specific features, including 3D object and environment scanning.

The LiDAR scanner improves the Measure app, making it faster and easier to automatically calculate someone’s height, while helpful vertical and edge guides automatically appear to let users more quickly and accurately measure objects. The Measure app also now comes with Ruler View for more granular measurements and allows users to save a list of all measurements, complete with screenshots for future use.

Some of the apps that will use the new sensor include:

Apple highlighted some of these apps in a promo video embedded below.

These LiDAR-enhanced features in the aforementioned apps will arrive later in 2020.

The new iPad Pro adds a ten-megapixel ultra-wide rear camera next to the 12-megapixel wide camera. Both shoot video in 4K, with the new ultra-wide shooter providing optical zoom out two times.

Like the 16-inch MacBook Pro, the updated iPad Pro integrates what Apple calls “studio-quality microphones”, and there are five of them — three mics are up the top above the TrueDepth camera, one is out the back next to the cameras and a fifth mic is located on the left side. Like with the previous iPad Pro, there are four speakers that automatically adjusts to any orientation.

Like all other iPads before it, this new iPad Pro has a ten-hour battery. On the networking side, you get 60 percent faster gigabit-class LTE (Apple claims support for more LTE bands than any other tablet), as well as faster Wi-Fi connectivity.

Apple has refreshed the Smart Keyboard Folio for the new iPad Pro while introducing a brand new keyboard accessory with a built-in trackpad, marketed under the Magic Keyboard moniker.

It’s got backlit keys for working in the dark, features passthrough USB-C charging and takes advantage of robust trackpad support in iPadOS 13.4. Apple claims it didn’t simply port macOS’s trackpad support over to the iPad with absolutely no regard to its touch-first nature. 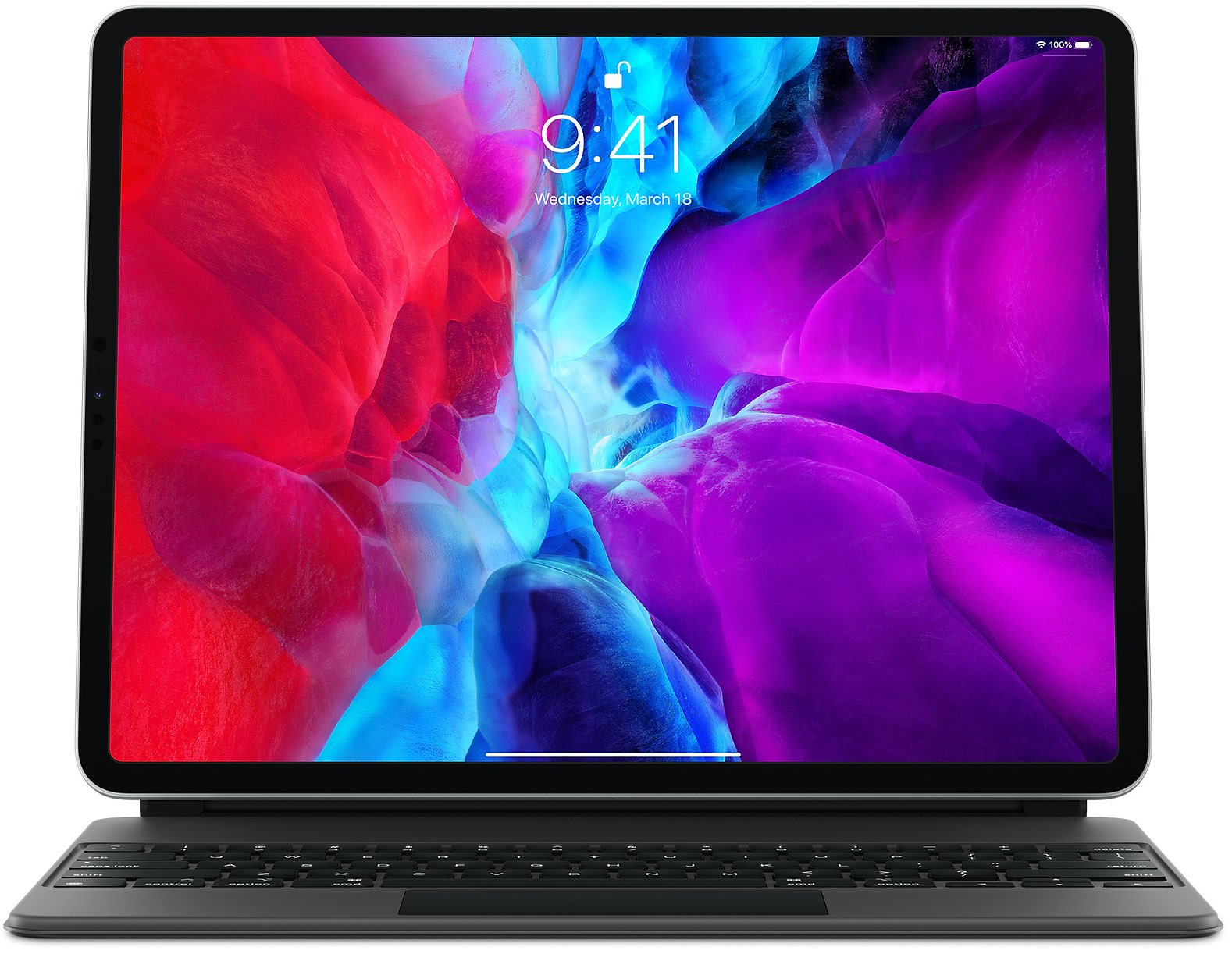 For instance, iPadOS 13.4 provides a dynamic cursor in trackpad mode that “elegantly transforms to highlight user interface elements” as you interact with the trackpad. The new Magic Keyboard also supports multi-touch gestures and works with 2018 iPad Pros.

Best of all, it’s got full-size keys with a reliable scissor mechanism that delivers 1mm travel, protects your iPad Pro and enables smooth angle adjustment up to 130 degrees thanks to its floating design and cantilevered hinges. 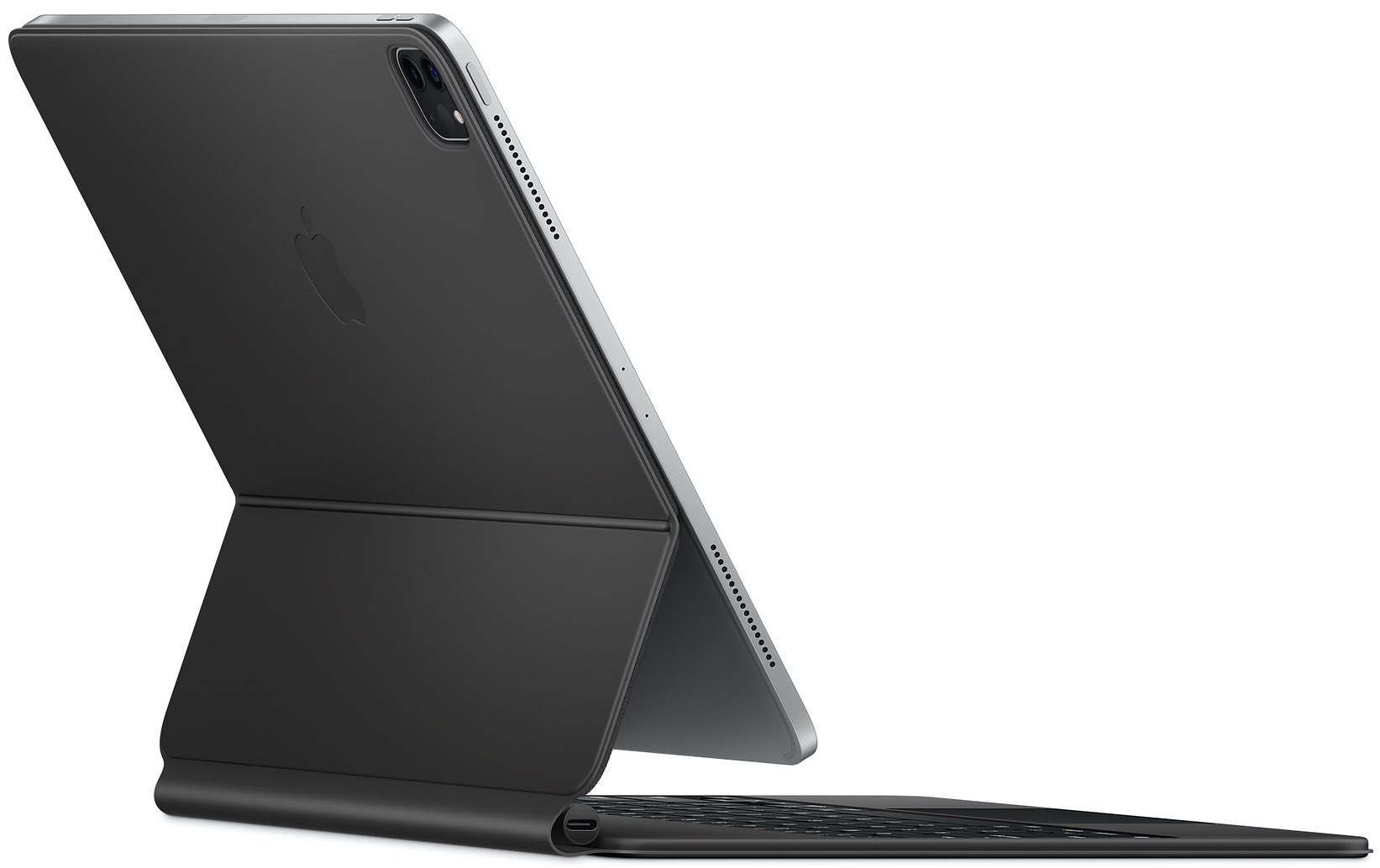 All those perks come at a steep price, however — the Magic Keyboard for iPad Pro will set you back $299 for the 11-inch version and a whopping $349 for the 12.9-inch version when it becomes available for purchase in May.

iPadOS 13.4 with trackpad support will be available March 24.

Available to order starting today on apple.com and in the Apple Store app in 30 countries and regions (arriving in stores starting next week), the new iPad Pro comes in Silver and Space Gray along with 256GB, 512GB and 1TB configurations.

These new models have replaced the previous-generation iPad Pros.

With iPadOS 13.4, Apple brings trackpad support to iPad, giving customers an all-new way to interact with their iPad. Rather than copying the experience from macOS, trackpad support has been completely reimagined for iPad. As users move their finger across the trackpad, the pointer elegantly transforms to highlight user interface elements. Multi-Touch gestures on the trackpad make it fast and easy to navigate the entire system without users ever lifting their hand.

Apple today also introduced the new Magic Keyboard for iPad Pro. With a floating design with smooth angle adjustment, a backlit keyboard and trackpad, the Magic Keyboard delivers the best typing experience ever on iPad. The Magic Keyboard will be available for purchase in May.

“The new iPad Pro introduces advanced technologies never before available in mobile computing,” said Phil Schiller, Apple’s senior vice president of Worldwide Marketing. “Combining the most advanced mobile display with powerful performance, pro cameras, pro audio, the breakthrough LiDAR Scanner and new Magic Keyboard with Trackpad, this is another huge leap forward for iPad. There’s no other device in the world like the new iPad Pro and we think our customers are going to love it.”

“We’re making iPad even more capable and versatile by bringing trackpad support to iPadOS,” said Craig Federighi, Apple’s senior vice president of Software Engineering. “We carefully considered the best way to integrate trackpad use into a touch-first environment while retaining everything our customers know and love about iPad. We’re thrilled to bring this new way of interacting with iPad to the millions of people using iPadOS today.”

Built for the most demanding tasks, like editing 4K video or designing 3D models, iPad Pro gets another performance boost with the new A12Z Bionic chip. The eight-core GPU in the A12Z Bionic, along with an enhanced thermal architecture and tuned performance controllers, gives iPad Pro the highest performance ever in an iPad. Combined with the eight-core CPU and the powerful Neural Engine, which enables next-generation apps, there’s no other chip that can offer the incredible performance found in the thin and light design of iPad Pro. With great battery life lasting up to 10 hours,1 faster Wi-Fi connectivity2 and gigabit-class LTE that’s 60 percent faster3 with support for more LTE bands than any other tablet, customers can stay productive and creative all day.

The edge-to-edge Liquid Retina display — in both 11-inch and 12.9-inch sizes — is the world’s most advanced mobile display. Featuring P3 wide color support, it lets customers see photos, videos, apps and games in vivid, true-to-life detail. ProMotion technology automatically adjusts the display refresh rate up to 120 Hz for ultra-smooth scrolling and responsiveness. And no matter where customers take iPad Pro or how they interact with it, True Tone, high brightness and an anti-reflective coating deliver the best viewing experience possible on any mobile device.

The Pro camera system on iPad Pro features a 12MP Wide camera for capturing stunning photos and 4K video, and now includes a 10MP Ultra Wide camera that zooms out two times to capture a much wider field of view. Adding a second camera doubles the photo and video possibilities, enabling different perspectives and multi-camera use — a game changer for creative pros.

iPad Pro now features five studio-quality microphones for capturing super clean audio and the quietest details, and delivers an immersive sound experience with four-speaker audio that automatically adjusts to any orientation, no matter how it is held. The combination of pro cameras, pro audio and the large display make iPad Pro a versatile mobile studio for creative pros including filmmakers, video professionals, podcasters and other content creators.

The breakthrough LiDAR Scanner enables capabilities never before possible on any mobile device. The LiDAR Scanner measures the distance to surrounding objects up to 5 meters away, works both indoors and outdoors, and operates at the photon level at nano-second speeds. New depth frameworks in iPadOS combine depth points measured by the LiDAR Scanner, data from both cameras and motion sensors, and is enhanced by computer vision algorithms on the A12Z Bionic for a more detailed understanding of a scene. The tight integration of these elements enables a whole new class of AR experiences on iPad Pro.

Every existing ARKit app automatically gets instant AR placement, improved motion capture and people occlusion. Using the latest update to ARKit with a new Scene Geometry API, developers can harness the power of the new LiDAR Scanner to unleash scenarios never before possible.

The LiDAR Scanner improves the Measure app, making it faster and easier to automatically calculate someone’s height, while helpful vertical and edge guides automatically appear to let users more quickly and accurately measure objects. The Measure app also now comes with Ruler View for more granular measurements and allows users to save a list of all measurements, complete with screenshots for future use.

iPadOS 13.4 brings trackpad support to iPad for the first time for a more natural typing experience and added precision for tasks such as writing and selecting text, working with spreadsheets and pro workflows. Designed specifically for the touch-first experience on iPad, the cursor appears as a circle that highlights user interface elements, text fields and apps on the Home screen and Dock, giving a clear indication of what users can click on. Fluid gestures on the trackpad make it easy to switch between apps, access the app switcher and activate the Dock, Control Center and apps in Slide Over.

Trackpad support in iPadOS is designed to work great with the apps customers use every day. From smoothly scrolling through web pages in Safari and photo libraries in Photos, to precisely editing text in Notes and quickly viewing and organizing your email in Mail, it’s a joy to use a trackpad with iPad. Most third-party apps work with no change at all, and developers can go even further with new APIs that let them deliver unique experiences in their apps.

Updates coming to Apple’s iWork suite of productivity apps — Pages, Numbers and Keynote — take full advantage of the trackpad and open up a whole new way to work with documents on iPad. Writing and editing text is a breeze in Pages, working with multiple objects in Keynote is easier than ever, and added levels of precision make working with even the largest spreadsheets a snap. Additional new features include gorgeous new templates in Pages and Keynote, giving users a head start on creating beautiful documents and, for the first time in iWork, users can add a drop cap to make a paragraph stand out with a large, decorative first letter. Collaboration will also become easier than ever with support for iCloud folder sharing and the ability to edit shared documents while offline.

Joining the second-generation Apple Pencil4 and an updated Smart Keyboard Folio5 is the new Magic Keyboard. Attaching magnetically to iPad Pro, the Magic Keyboard puts the beautiful Multi-Touch screen on display with its floating design, working equally well on a lap or on a desk. Unique cantilevered hinges allow smooth adjustments of the viewing angle up to 130 degrees. The portable and protective design of the Magic Keyboard delivers a full-size keyboard with backlit keys and a scissor mechanism that delivers 1mm travel, delivering the best typing experience ever on iPad.

The Magic Keyboard features USB-C pass-through charging, keeping the USB-C port on iPad Pro free for accessories including external drives and displays. The click-anywhere trackpad on the Magic Keyboard complements the touch-first design of iPad for easy navigation and precise adjustments, adding even more versatility and productivity to the iPad Pro experience.