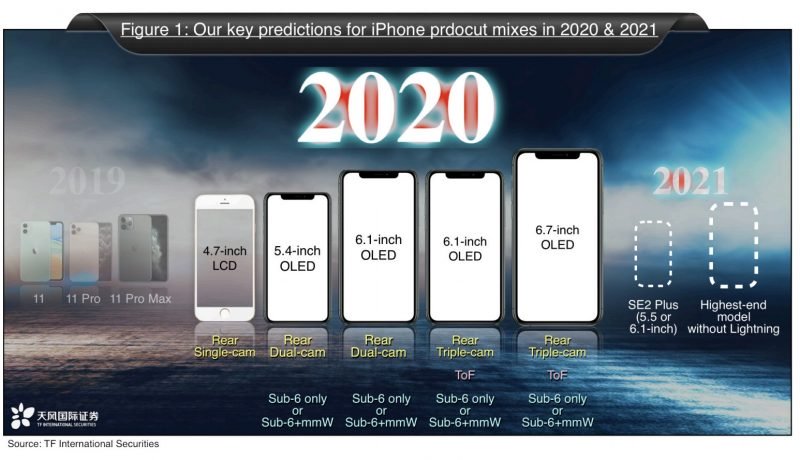 It’s been rumored off-and-on for quite some time that Apple would drop the Lightning port from the iPhone lineup, and here we go again.

This latest report comes from renowned analyst Ming-Chi Kuo (via MacRumors), who states that Apple will be dropping the Lightning connector from the iPhone in 2021. Not next year, unfortunately, when Apple is expected to introduce another big change: 5G. Apparently we can only deal with one big change at a time, people.

The above graphic paints a pretty clear picture about next year, and the following year. As you can see, Kuo’s latest analyst report shows us that Apple is going to launch a lot of phones next year. That would certainly line up with a previous report, so it’s not completely out of nowhere.

So next year: We have a 4.7-inch iPhone with an LCD display and a single rear camera, which is probably the “iPhone SE 2” we’ve been hearing so much about. Next, the 5.4-inch OLED iPhone with two rear cameras, followed by two iPhones with 6.1-inch OLED displays. One of those phones will have a pair of rear cameras, and the other with three rear cameras.

At the top of the tower for 2020 is the 6.7-inch iPhone with an OLED display and three cameras on the back. Some of the 2020 iPhone models will apparently have similar design styles to the iPhone 4 with metal frames and flat edges.

It’s worth noting that Kuo’s graph shows that all four high-end iPhone models are going to be rocking 5G connectivity, but he doesn’t nail down which technology any of the phones will be using. Each model is listed as having “Sub-6 only or Sub-6+mmW”.

According to Kuo, Apple’s 5G iPhones will come equipped with Qualcomm’s X55 modem (no surprise there). Kuo also expects the handsets to be available in the United States, Canada, Japan, South Korea, and the United Kingdom. Kuo also believes it’s possible that Apple will disable some 5G connectivity in regions where 5G is not yet supported, or not widely available.

But hey, we’ve got confirmation from Qualcomm‘s president that Apple is definitely launching 5G iPhones soon, so there’s that.

Next! 2021: what will go down as the Year Without Lightning (hopefully). Interestingly, Kuo believes that Apple will be launching an “SE2 Plus” (because why not?), but that one will probably have a Lightning connector. Meanwhile, the “highest-end model” will be the one without Lightning. That model will apparently be positioned as a “completely wireless experience”.

As for that iPhone SE 2 Plus? Well that one will apparently have a full-screen design and Touch ID (yes, that Touch ID) will be embedded into the power button on the side of the handset. It will arrive in the first half of 2021, if everything goes according to plan on Apple’s end.

Apple will launch the ‌iPhone‌ SE2 Plus in 1H21. We predict that the display size will be 5.5 or 6.1-inch. This model will adopt a full-screen design. The notch area will be smaller because of no Face ID support. The ‌Touch ID‌ will be integrated with the power button, which is located on the side.

So there we go! Four models with 5G next year, at least one model without Lightning in 2021.