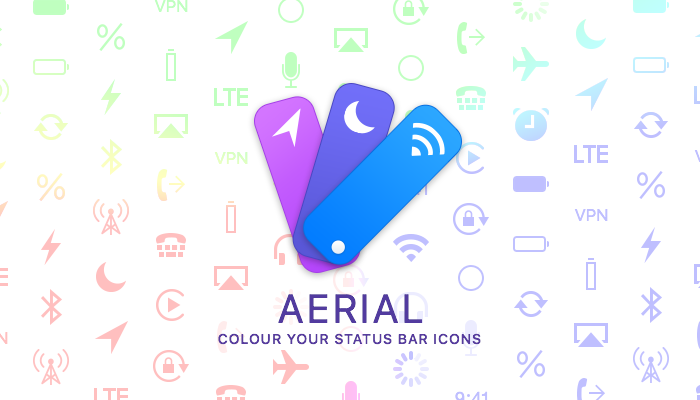 The Status Bar is something that iPhone and iPad users will interact with on a daily basis, and that’s why those looking to add a touch of personalization to their pwned handsets should consider checking out a newly released jailbreak tweak called Aerial 2 by iOS developer PolyTweaks.

As you might’ve ascertained already from the name, Aerial 2 is the reincarnation of a tweak that was initially released three years ago. Just like the original, the newer tweak lets users colorize their Status Bar’s icons however they want with individualized color pickers.

If you aren’t familiar with the original Aerial release, then you might be delighted to know that the tweak’s design was heavily influenced by Surenix, a renowned graphic designed in the jailbreak community. As such, you can expect a pleasant user experience.

Below is an example of what you might come to expect after colorizing your Status Bar icons with Aerial 2:

See how it works in the video demonstration below:

Upon installing Aerial 2, you’ll find a dedicated preference pane in the Settings app where you can configure the tweak to your liking:

Here, you can colorize any of the following Status Bar icons:

As for colors, you can choose from any of the following pre-defined options:

According to a note at the bottom of the primary preference pane, users won’t need to respring to save their changes unless they’re setting the color option to “None.” Every other color selection should adjust on the fly.

Colored Status Bar icons by way of Aerial 2 appear system-wide, which means whether you’re in an app, on the Lock screen, on the Home Screen, or somewhere else in iOS where the Status Bar is visible, you’ll get to see your colorful selections.

Those interested in adding a splash of color to their jailbroken iPhone or iPad on iOS 13 can download Aerial 2 from the Havoc repository for $1.99 in their preferred package manager. Unfortunately, it’s not a free upgrade for those who own the original.

Will you be colorizing your Status Bar with Aerial 2? Let us know in the comments section below.