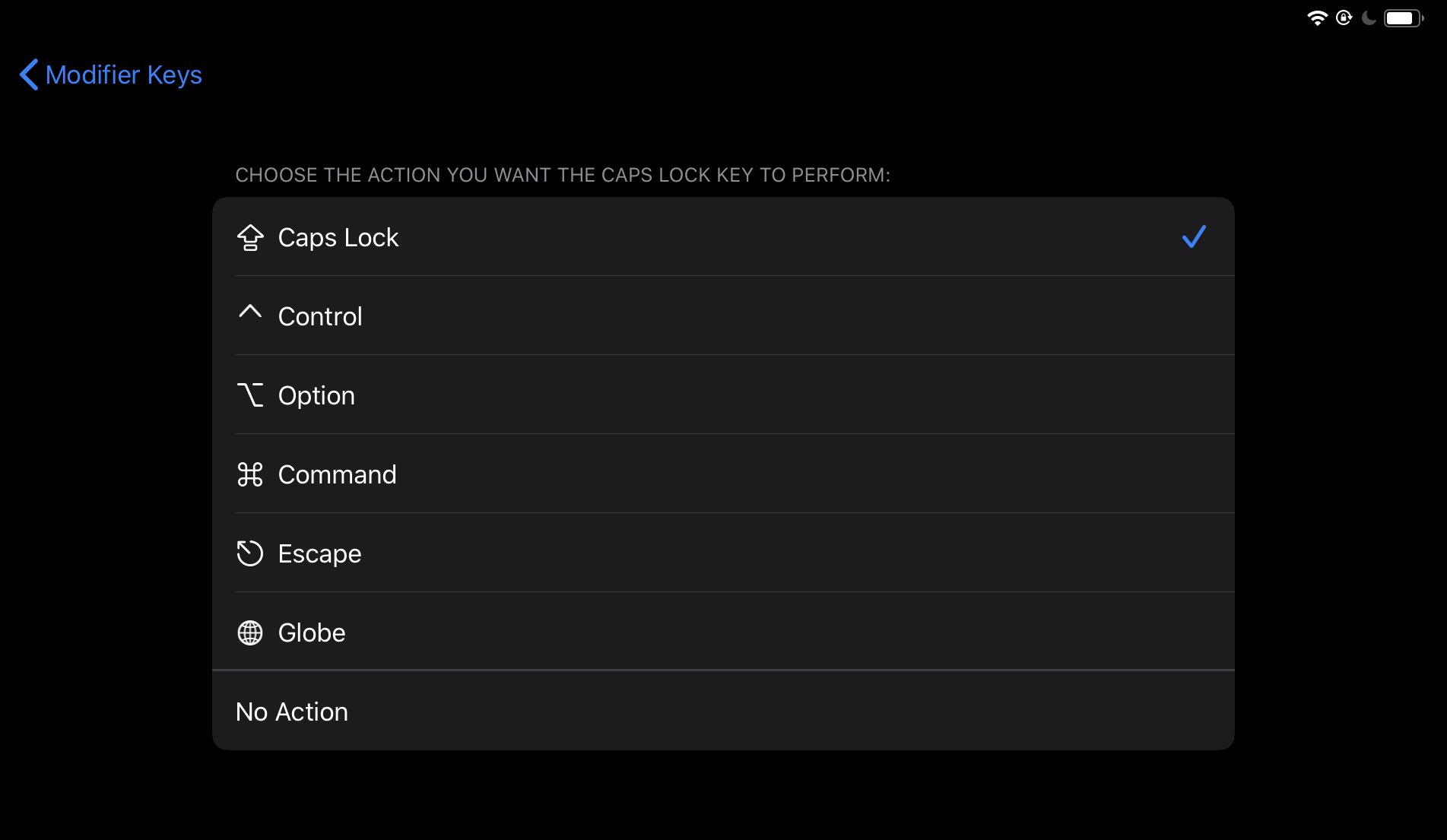 The iPadOS 13.4 update which released for developer testing yesterday brings a new feature that lets you remap default functions of certain hardware keys such as Caps Lock and Control.

With this feature, iPad owners can remap the Caps Lock key to become the Escape key, or change the function of the Globe key found on external keyboards such as Apple’s own Smart Keyboard Folio so that pressing it invokes the function of another key, like Control, for example.

According to the screenshots developer Steve Troughton-Smith shared on Twitter, modifier key remapping works with the following hardware keys on external keyboards.

Unfortunately, the Function key (fn) is not an option.

For each modifier key, you can choose specific action you’d like it to perform when pressed. The list of available actions is limited to the same modifier keys that are listed above. As an example, you can set the Caps Lock key to be either Escape, Control, Option, Command, Globe or — well — Caps Lock, but not, say, the “A” key.

This is most likely part of Apple’s continuing improvements to Catalyst, which is its software framework designed to make it easier for developers to bring their existing iPad apps to the Mac. Another new feature in iOS and iPadOS 13.4 that could tie into this allows apps to detect when a keyboard key was pressed and released.

This will let iPad games take advantage of a physical keyboard like Apple’s Smart Keyboard Folio without using workarounds https://t.co/v2cCWvhHcg

As a result of this enhancement, complex games for the Apple tablet like Fortnite will be finally able to take full advantage of a physical keyboard such as Apple’s Smart Keyboard Folio without having to resort to JavaScript workarounds that often break compatibility.

I'm *very* intrigued by the idea of key up/down events coming to native apps with iPadOS 13.4. Opens up so many possibilities for keyboard control.

Case in point: with iPadOS 13, Safari already supports arbitrary shortcuts without holding down ⌘. Imagine this, for every app. 😍 pic.twitter.com/Zo2jc4uuN7

Last but not least, hardware modifier key remapping has been available on the Mac for years.

How do you like the ability to remap what these select hardware keys do in iPadOS 13.4?