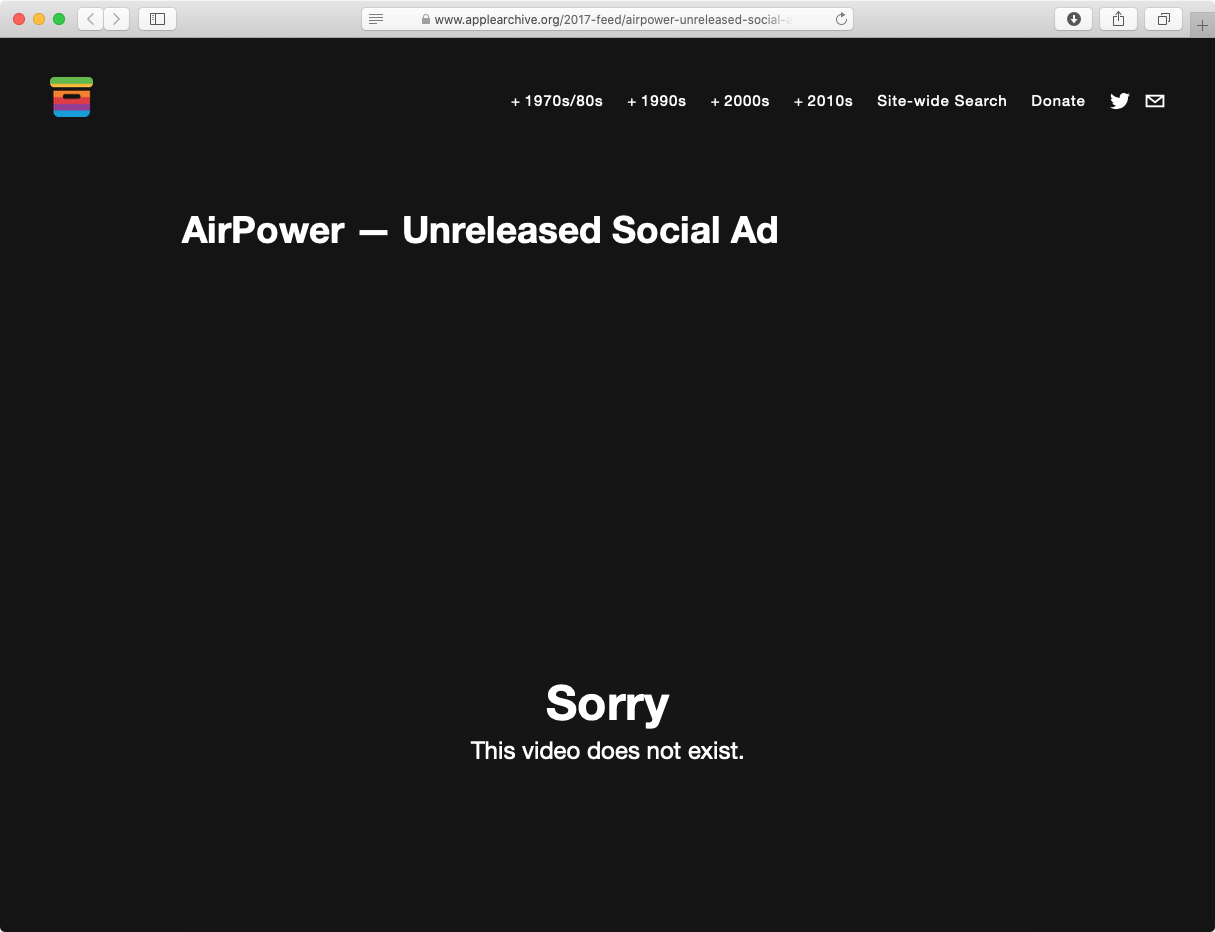 The (Unofficial) Apple Archive, an incredible labor of love by Sam Henri Gold who sought to preserve the company’s legacy of creativity, is losing most of its videos because Apple’s legal team has apparently issued DCMA takedowns by the hundreds.

Late Friday, curator Sam Henri Gold received a veritable deluge of DMCA takedown notices originating from Apple’s lawyers, letting him know the vast majority of the videos he’d uploaded to Vimeo had been removed from the Internet. ‘Do you know what it’s like getting 700 email notifications on your wrist in like two minutes? Your wrist sorta goes numb from the vibrations,’ Gold tells The Verge.

While Gold hasn’t received any direct communication from Apple or its lawyers yet, he is already looking into his legal options, asking on Twitter whether anyone had any first or second-hand experience with a good copyright lawyer in the New York City area?

Just got a HUGE dump of ASW print-size images from 1996. Told you this project isn't going anywhere. Stay tuned. pic.twitter.com/mplImnNh3q

He told The Verge he’d work with Apple on an official version of the archive, if possible.

A bunch of both past and present Apple employees have shown overwhelming interest and support for what I’m doing, I get their brand doesn’t dwell in the past, but public company history preservation is invaluable for their devoted consumer base and researchers alike.

This is all very disappointing to true Apple fans. Even if it’s perfectly OK for a company like Apple to issue DCMA takedown requests to control its narrative, it’s still a shame because the community has now lost a valuable resource that spanned decades of Apple history.

The (Unofficial) Apple archive launched last week with thousands of photos, videos, Mac wallpapers, television commercials and other official materials from the company’s press packs, but now hundreds of videos have been taken down.

don’t you worry, I’ve got backups stored on a handful of services in a couple continents in addition to my local drive. they may take my website BUT THEY WILL NEVER TAKE MY DATA! LA PAIX POUR LES CHERCHEURS, LA GUERRE POUR LE BUREAU DU CERCLE!! VIVE LA FRANCE!!!!!!

This is especially worrisome because the project was a gold mine of rare footage. For instance, we were able to dig up an unreleased social ad for the ill-fated AirPower wireless charger.

As of January 25, there were still 264 videos remaining.

There are 264 that have yet to be taken down, try to spot them all!

The takedowns shouldn’t really surprise anyone, since 1) these videos do presumably all belong to Apple, not Gold; 2) companies generally have a duty to protect their intellectual property; and 3) because Gold and Apple have seemingly been playing a game of whack-a-mole for a while now.

Maybe Apple should think about creating its own official archive for everyone who wants to learn more about its history rather than kill passion projects like the (Unofficial) Apple Archive.

The project is available at applearchive.org.

Are you enraged by Apple’s DCMA takedown requests? Did you visit the (Unofficial) Apple Archive yet? If so, what did you think of it?