Things have been getting very real in the jailbreak community in the past several weeks. One of the most significant tidbits of news has been the development of the A5-A11-based checkra1n jailbreak by Luca Todesco and others, which rides on the back of a brand-new bootrom exploit from @axi0mX called checkm8. But the captivation isn’t stopping there.

With all the exciting information (and drama) that we’ve seen recently, one might be inclined to say it’s breath of fresh air to see unc0ver jailbreak lead developer Pwn20wnd touting potential work on something new. The hacker took to Twitter Sunday morning to share pertinent information for A12(X) and A13 device users who might be in the market for a jailbreak: 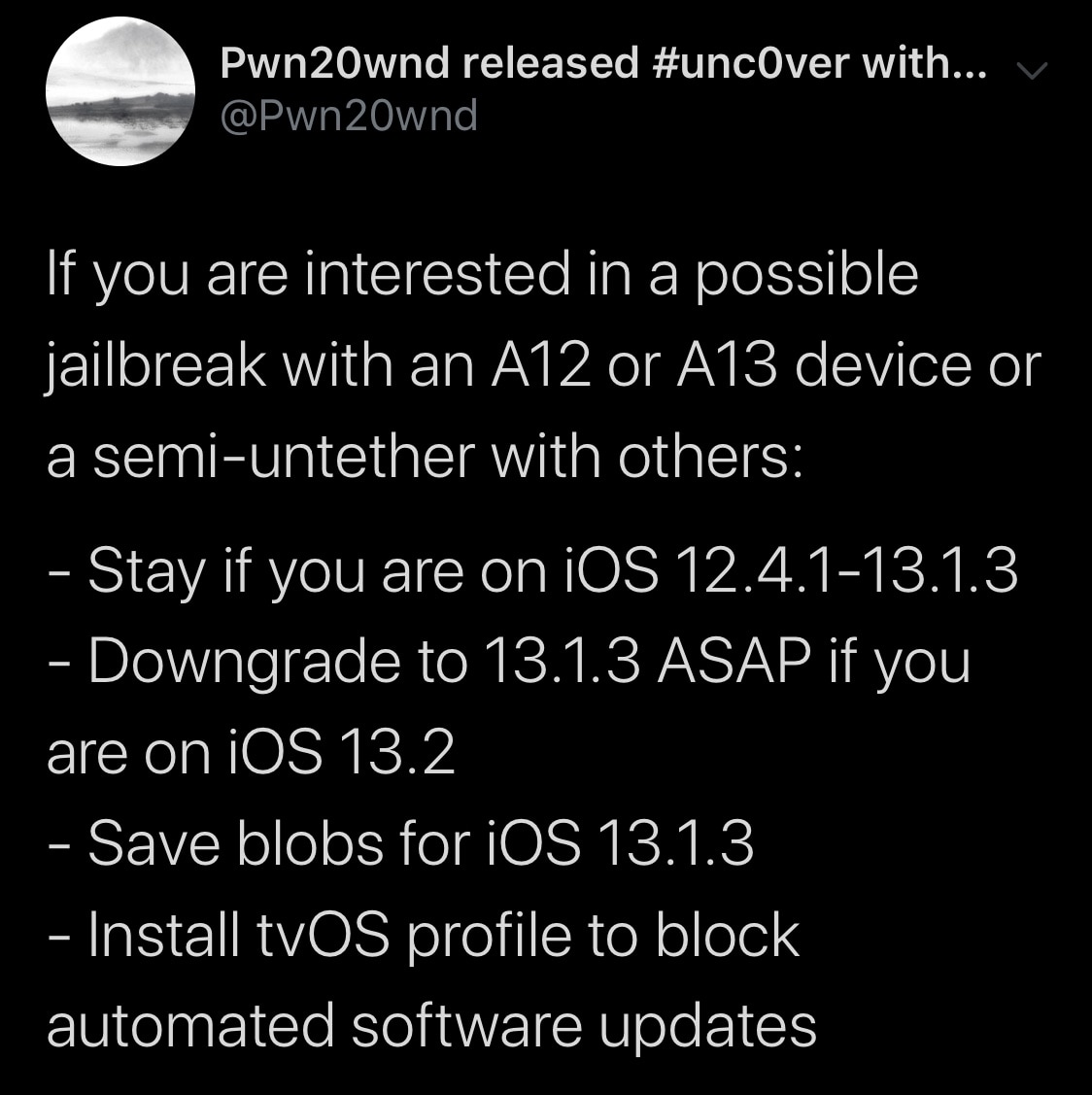 From what we can gather, there’s a new kernel bug in the wild compliments of security researcher @S0rryMyBad that could potentially assist in the development of a full-blown tfp0 exploit that works on the aforementioned devices. If this ever comes to fruition, then it would mean this is the first ever possibility of a public jailbreak solution on Apple’s brand-new iPhone 11, 11 Pro, and 11 Pro Max handsets.

The Tweet and others shared shortly after also denotes the following advice:

If you are interested in a possible jailbreak with an A12 or A13 device or a semi-untether with others:

If you are already jailbroken or on iOS 12 with an A12 device -> STAY.

Worthy of note, this bug works up to iOS 13.1.3, but does not work on iOS 13.2. That said, those with an interest in jailbreaking on iOS 13.2 are advised to downgrade to iOS 13.1.3 while it’s still being signed by Apple. You can check the signing status of any firmware at your convenience via IPSW.me.

As for those who might already be jailbroken on iOS 11 or iOS 12, Pwn20wnd advises that you stay since there’s no guarantee that this kernel bug will develop into anything more. As always, it’s better to be jailbroken than to be waiting for a jailbreak that may or may not materialize.

In a post published on /r/jailbreak, Pwn20wnd goes on to explain that if a tfp0 exploit should arise, it would necessitate more work on iOS 13 than iOS 12. That said, he recommends that A12(X) handset owners stay on iOS 12 as opposed to iOS 13, which isn’t that big of a deal given that many of iOS 13’s flagship features can be had on a jailbroken iOS 12 device anyway.

A13 device users, on the other hand, don’t have much choice but to use iOS 13 since this is the software that shipped on these handsets out of the box. Nevertheless, it’s possible for any kernel exploit to support this setup as well, assuming the so-called kernel bug evolves into a tfp0 exploit. Pwn20wnd explains more below:

Semi-untether with other devices would basically be a seamless switch between the upcoming checkra1n jailbreak and unc0ver — You could jailbreak with checkra1n and use unc0ver to enable the jailbreak without a computer when your battery runs out or your phone needs to restart.

While indeed interesting, everything is still somewhat preliminary at this moment in time. Those who might want the possibility of a jailbreak on A12(X) or A13 devices on iOS 12 or iOS 13 will want to heed Pwn20wnd’s advice just in case anything useful surfaces. Still, that’s just a big ‘if,’ and by no means any sort of guarantee that you should take to the bank.

Are you excited about the possibility of an A12(X) and A13 jailbreak? Let us know in the comments section.