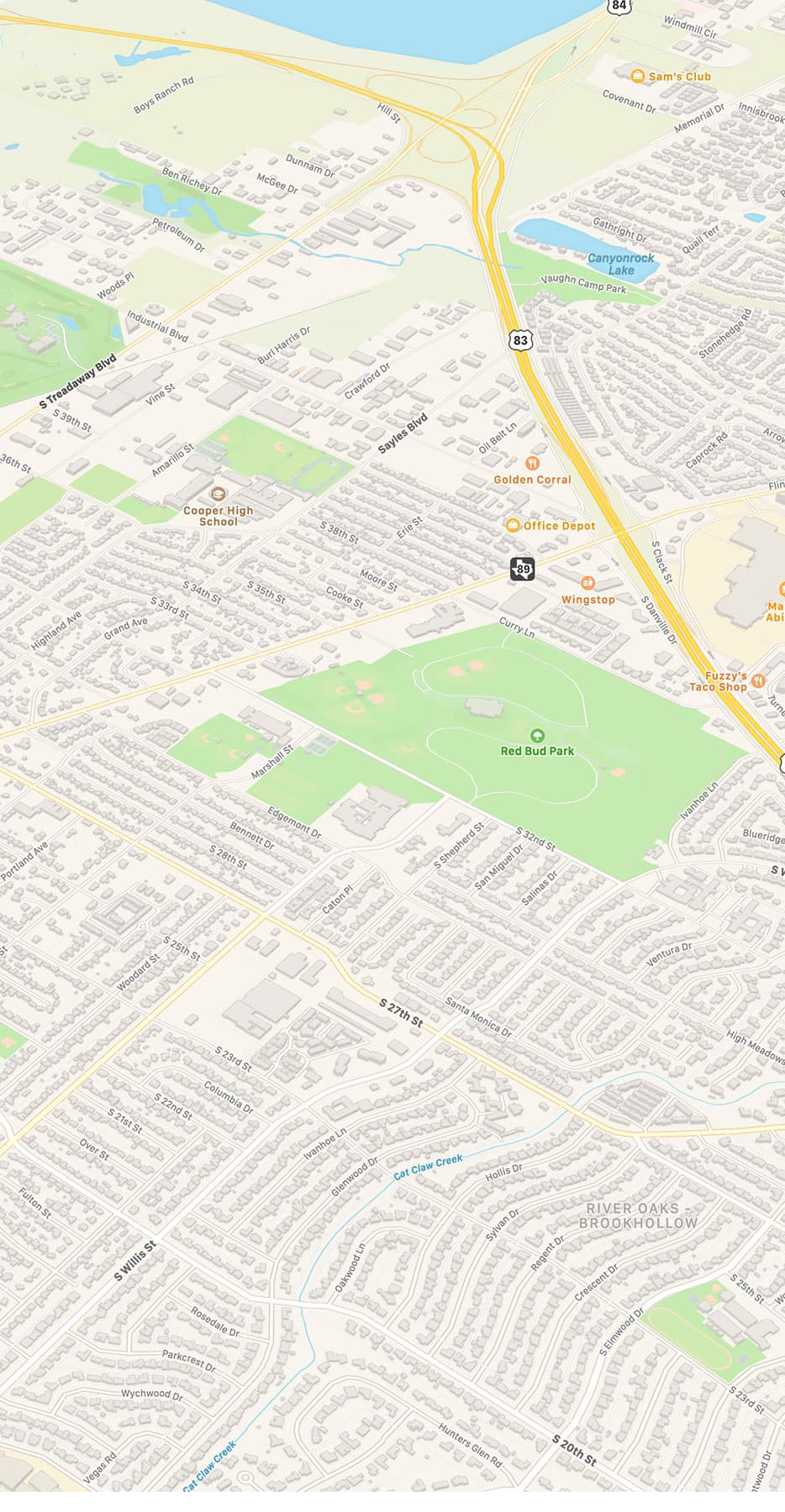 One of the biggest changes Apple made with iOS 13 was to Maps. The company announced this year, during the WWDC keynote, that it was bringing new realistic details to the service, while also adding new features that make using Maps even more enjoyable — and useful.

We have known for a year that Apple is rebuilding Maps from the ground up to offer a better experience. Now, the fruits of that labor are now showing up, with the rest of the changes planned to launch later this year when iOS 13 arrives. But, before we get there, let’s dig into a quick overview of the changes Apple is making to Maps, aiming to improve the experience in just about every way.

Apple is working to make Maps even more detail-rich, no matter where you travel. The company’s new Maps is meant to offer up a better look at the world around you, from beaches, to busy cities, and even parks. You can see what this looks like in the top image, where the new Maps is littered with buildings to better represent the realities of the world.

In that same vein, Apple is introducing a new feature in iOS 13’s Maps called Junction View. Apple says it wants to reduce the instances of wrong turns or “directional misses” with this feature. Junction View will inform the driver of the correct lane they should be in before the junction arrives. This will work with turns, but also elevated roads as well.

Just Take A Look Around 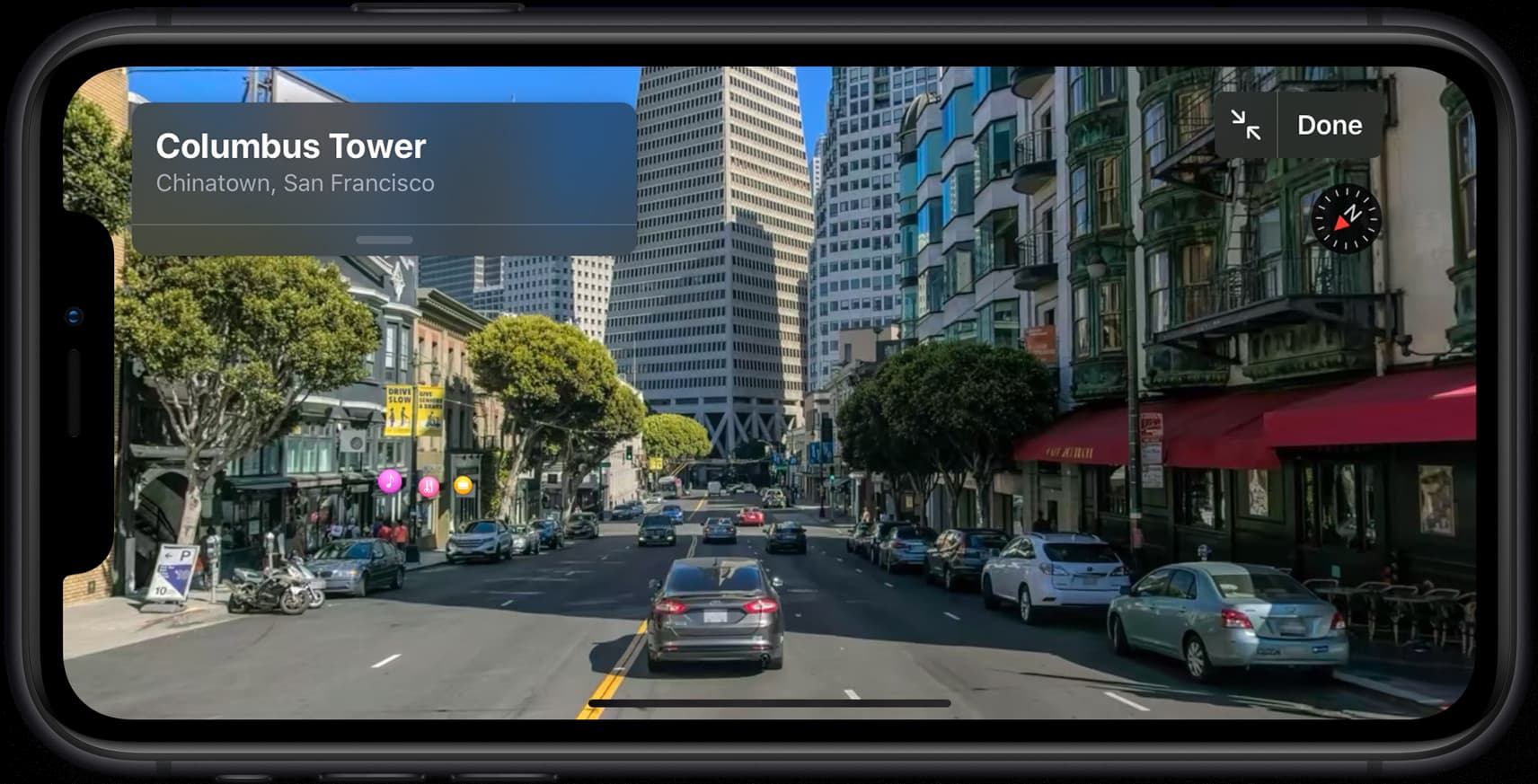 One of the most popular features of Google Maps, Apple’s perceived primary competition in this space, is Street View. And now Apple can say it has a similar feature of its own. The company calls it “Look Around”, and it works in much the same way as Street View. Just tap on a location within the new Maps experience and you’ll dive right in, being able to see the street and other key details of the immediate area.

Look Around offers a 360-degree view of the street you want to see. You can see it pictured just above to get a feel for what it will offer. And Apple says it will also feature “seamless transitions” as you navigate along one street and down another. 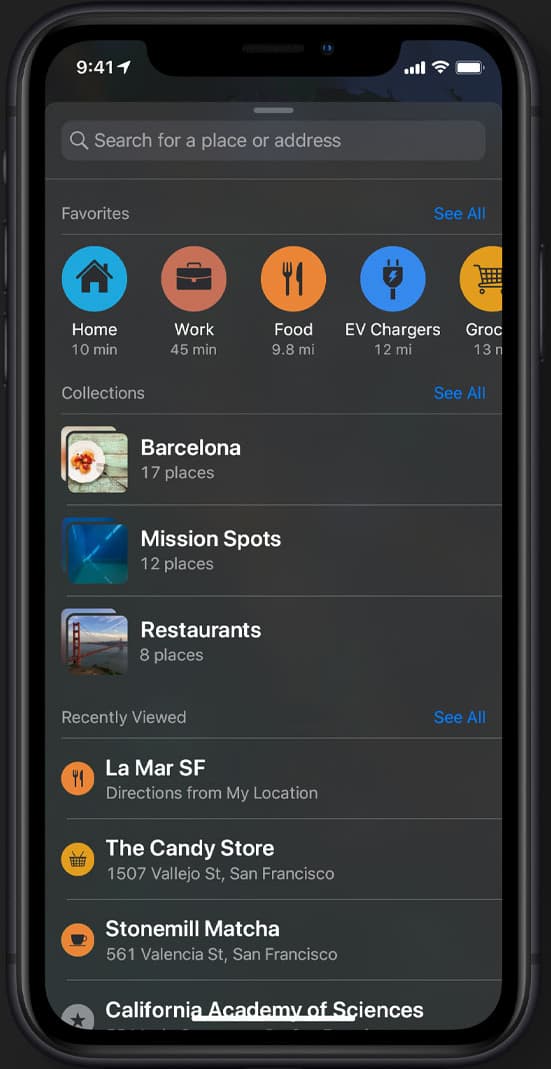 Being able to quickly navigate to your favorite spots is a big focus with iOS 13 and the new Maps experience. As such, Apple has tweaked the formula here, offering up a new Collections feature, and improving the Favorites feature for good measure.

With Collections, Apple is making it possible for users to build a stack of their favorite locations within Maps. Apple says this will make it easy to share with family and friends, and will offer up one-tap navigation options for each user, too.

Meanwhile, Favorites is getting improvements as well. Users will be able to add work, home, their gym, or “your kid’s school”, to a customizable list of favorite places. This will make it easier than ever to navigate to these places, all with a single tap.

Finally, better customer feedback. Apple is redesigning this aspect of Apple Maps, which will make it easier for users to offer up feedback for real world locations. Now, if a user notices an incorrect address, business location, or operating hours, they should be able to send that data to Apple in an easier, and faster, way.

Maps should be a bastion of information, both for the user and others that person wants to share it with. Apple is leaning into that idea with iOS 13, adding a few different features that not only offer up more information for the individual, but also a quick and easy way to let friends and family know when they might arrive.

With real-time transit, Maps will now show network stops, arrival times, and transit schedules. All of this should make route planning even easier as the user tries to get from one spot to another. But what about cancellations and public transit outages? Maps will now show that information in real time, too.

When you use Maps to navigate, you’re already given an estimated time of arrival, or ETA. With iOS 13, users will be able to send that information to family, friends, or coworkers, letting them know when they should expect you. And if your ETA changes because of a delay, it will automatically be updated so everyone stays informed.

Maps will be able to keep you informed of your flight status, too, with iOS 13. The service will offer “up-to-the-moment” information when it comes to the user’s flight terminal(s), gate locations, and departure times.

Apple isn’t forgetting about Siri, either. The company confirmed that the digital personal assistant’s new tricks, which include enhancements to natural language output, will improve direction giving. Apple’s provided an example, saying that instead of Siri saying something like, “in 1,000 feet turn left”, the digital assistant will now say something like, “turn left at the next traffic light”.

Siri’s improvements will also help navigate the user closer to their destination, which Apple says is especially important for larger venues.

That’s not all, though. Apple is also bringing improvements to both Place cards and CarPlay, while also improving tools for developers.

Place cards are getting improved with better information for each individual location. Apple notes that Place card for its own physical retail stores will now show up-to-date information regarding Today at Apple events. The information will be dynamically updated for each Place card, supporting things like movie theater film showtimes and more.

CarPlay is seeing improvements to navigation, search, and route planning. Junction View will also be available with the in-car system as well. Apple will also be making sure that the Collections and Favorites are accessible.

MapKit will support Dark Mode, and will give developers even more tools to add new features to their own map services. With vector overlays, developers will be able to add heat maps, weather, or buildings on top of their maps. They will also be able to build in point-of-interest filtering.

It has been al long time coming, but Apple is finally rolling out features that will hopefully make its Google Maps rival something actually worthwhile to use. With improved Siri guidance, Look Around, far more detailed maps, and much more, Maps is becoming a real contender.