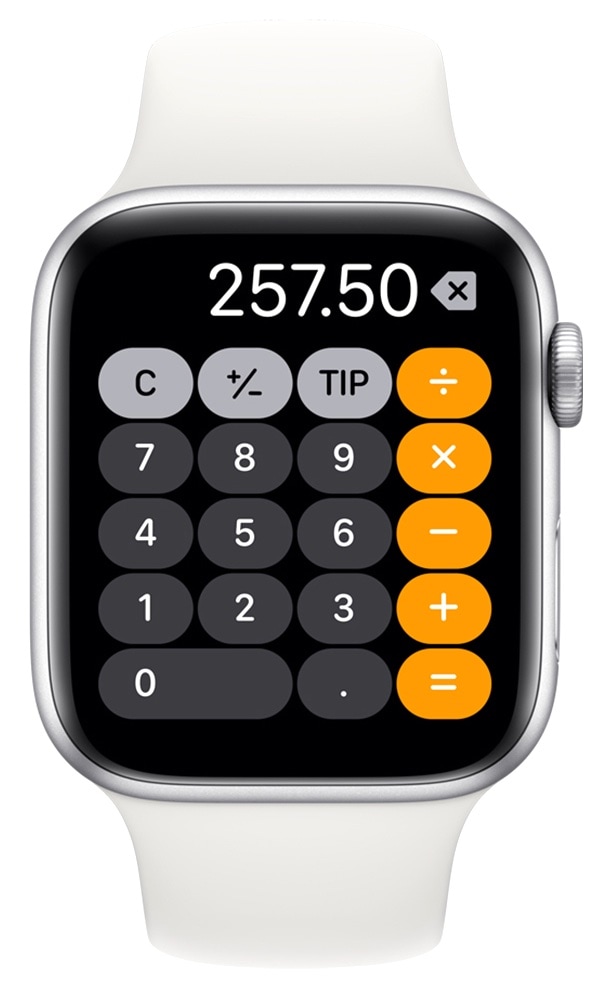 One of my biggest beefs with the Apple Watch for the longest time has been the lack of a native Calculator app much like what you’d expect to find on your iPhone’s Home Screen. Fortunately, Apple is finally resolving this issue with watchOS 6, which Apple announced today at WWDC 2019.

As shown in the screenshot example above, watchOS 6 will incorporate a full-blown calculator interface into the Apple Watch, allowing you to perform basic mathematic calculations right from the comfort of your wrist. The interface should look mostly familiar to iOS users, as it gets many of its design cues from the iPhone’s Calculator app.

If that wasn’t music to your ears already, then you’ll also want to direct your attention to the left of the division button. There, you’ll notice a dedicated TIP button, and as you might come to expect, this button lets you calculate a gratuity amount for a dinner check or otherwise right from the comfort of your wrist.

Groundbreaking? Not really; but a lifesaver? Absolutely.

I’ve long used a third-party app called Calcbot to perform math and tip calculations from my Apple Watch, but I expect that Apple’s native Calculator app will be much more pleasant and responsive and won’t necessitate having an unused parent app installed on my iPhone just to have access to a calculator from my wrist.

For what it’s worth, having a GUI app on your Apple Watch can be more convenient than asking Siri to perform mathematical functions for you. Sometimes you’re in a noisy environment where Siri can’t hear you, or you’re in such a quiet place that you don’t want to make a scene by speaking to your Apple Watch. This new app will be a lifesaver in both situations.

Are you excited to finally have a native Calculator solution on the Apple Watch with watchOS 6? Discuss in the comments section below.