New Year’s Eve was a busy day for hacker and unc0ver lead-developer Pwn20wnd. Shortly after dropping the official public release of unc0ver v2.1.0, Pwn20wnd issued a quick revision for the jailbreak tool comprised of bug fixes.

Pwn20wnd announced the revision Monday evening via Twitter, noting that the contained fixes targeted “weird issues” being experienced by some users: 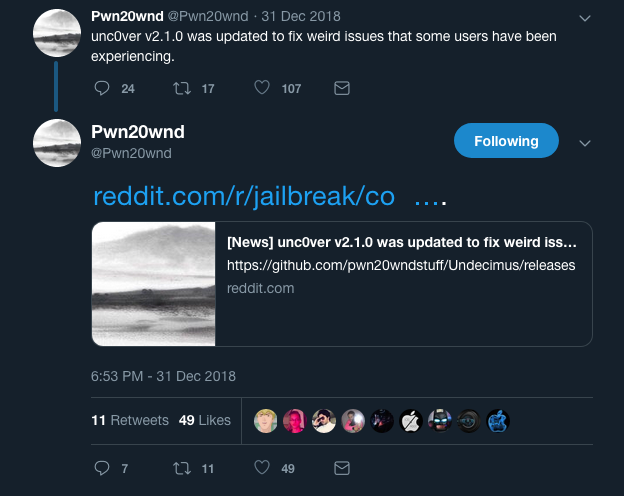 The changelog for the new unc0ver v2.1.0 revision has been published on Pwn20wnd’s official GitHub repository, and cites the changes listed below:

Notably, the revision wasn’t substantial enough to warrant a new version number for unc0ver; v2.1.0 continues to be the latest iteration of the iOS 11-centric jailbreak tool.

As with all official public releases, we recommend all unc0ver users update to the latest version of the jailbreak tool at their earliest convenience to ensure the most stable experience possible. It’s available as a free download from Pwn20wnd’s official GitHub repository.

Have you tried the latest version of unc0ver yet? Let us know how it worked for you in the comments section below.