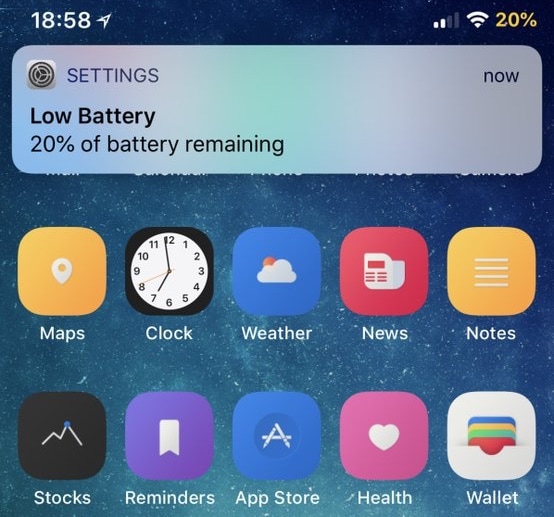 When your iPhone’s battery level dips below 20%, a persistent pop-up alert appears front and center on your display to let you know. Most people cringe at these kinds of notifications because they get in the way of everything, but a free jailbreak tweak called LowBatteryBanner by iOS developer SparkDev can help.

As you might have inferred from the name already, LowBatteryBanner replaces the standard low battery level pop-up alert with something we can all appreciate: a banner notification.

In the screenshot example above, you can see what a low battery level banner notification looks like. It contains the same information as a standard pop-up alert, but it behaves as a banner would. Consequently, it appears at the top of the display and doesn’t intrude on whatever you might be doing.

The concept isn’t new by any means, but if you’ve been searching for a version of this concept that works flawlessly on iOS 11, then you can end your search at LowBatteryBanner.

LowBatteryBanner doesn’t come with any options to configure, so what you see is ultimately what you get. Expectedly, these low battery banners only pop up when your handset’s battery level drops to 20% and 10% respectively, just like the pop-up alert would.

If you’re interested in doing away with one of iOS’ common qualms, then you can download LowBatteryBanner for free from SparkDev’s beta repository in Cydia. The tweak can be installed on all jailbroken iOS 11 devices.