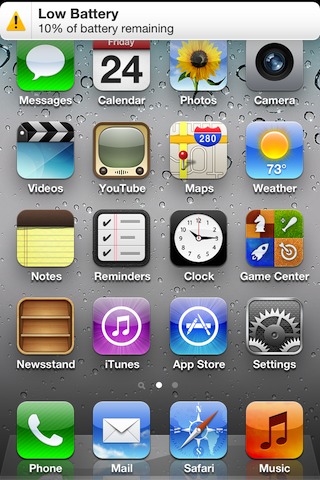 I can’t be the only one that thinks it’s weird that Apple’s still using those focus stealing low battery alerts, can I? I mean, doesn’t it seem like Apple would have preferred to use iOS 5’s new banner notifications instead?

Well, apparently I’m not the only one who feels that way, because a new tweak has been released in Cydia named LowPowerBanner, and it does just that…

After installation, your low power alerts will now appear via a much-less obtrusive banner alert instead of the focus stealing alerts of yesteryear.

Interestingly enough, this exact same feature was requested on our latest episode of Ask Jeff:

I’m not sure if this was a direct response to that inquiry, but congrats to jenyuan526, your request has been granted.

LowPowerBanner features no app icons or settings to configure, just install it and it starts working. Obviously this tweak requires you to be on iOS 5 since it utilizes iOS 5’s banner notification feature.

Do you think you’d prefer this manner of low power alert, or are you content with what we currently have?