It’s been a little while since we’ve seen any updates for the unc0ver jailbreak tool; the latest update to be released was version 1.1.4, more than three weeks ago. But despite what appeared to be a sudden halt in rapid update releases, it appears that iOS hacker Pwn20wnd has indeed been hard at work on another update for the iOS 11-centric jailbreak tool.

The public beta of unc0ver v2.0.0 has announced by Pwn20wnd via his Twitter account on Thursday, signaling what some might consider to be a major update for the jailbreak and many of its internal mechanisms: 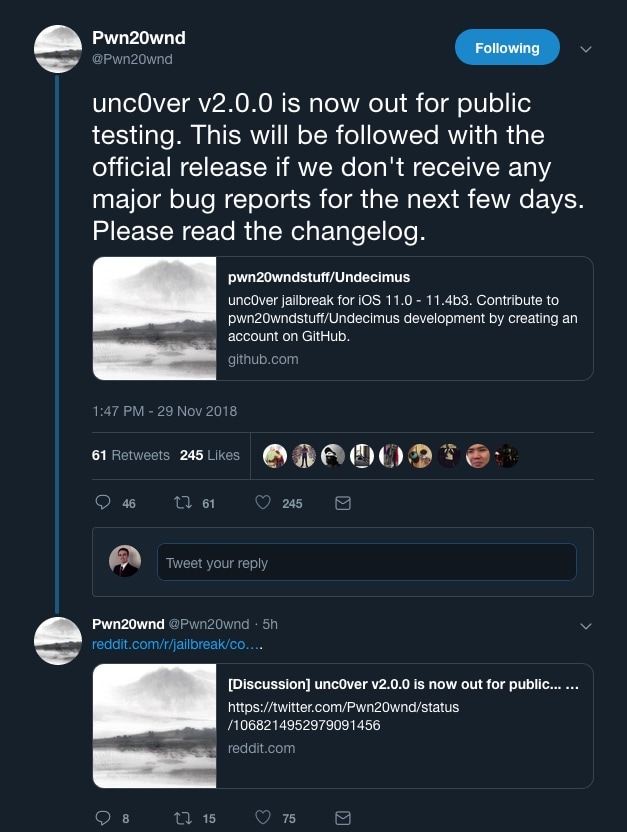 Citing Pwn20wnd’s official unc0cver GitHub repository, v2.0.0 of the jailbreak tool brings with it the following changes and improvements:

While the update is available to anyone willing to install a public beta, we recommend holding out until the final release unless you’re an advanced user and know exactly what you’re doing.

From Pwn20wnd’s Tweet, we can gather that the public beta is intended to help the hacker test some of the tool’s most significant changes incrementally. He will use user-generated bug reports to identify and fix bugs and crashes such that the final release of unc0ver v2.0.0 will be as bug-free for most users as possible.

Assuming unc0ver v2.0.0 is mostly bug-free, Pwn20wnd says we can expect an official public release within the next few days. The public beta is available to download in the releases section of Pwn20wnd’s GitHub repository.