Over the weekend, iOS hacker Pwn20wnd released an update to the unc0ver jailbreak tool for iOS 11.0-11.4 beta 3; the latest release brings it up to version 1.1.1.

Pwn20wnd announced the update via his personal Twitter account, denoting how unc0ver V1.1.1 encompasses more bug fixes and improvements for streamlining the tool: 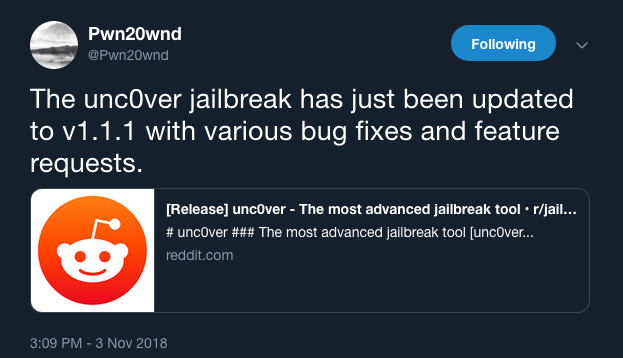 Anyone using the unc0ver jailbreak is advised to download V1.1.1 from Pwn20wnd’s GitHub repository at their earliest convenience. The bug fixes don’t appear to be overly-significant, but they can still improve the reliability of the tool and its components, making it more stable overall.

Did unc0ver V1.1.1 fix any of the issues you might have had with the jailbreak? Share in the comments section below.