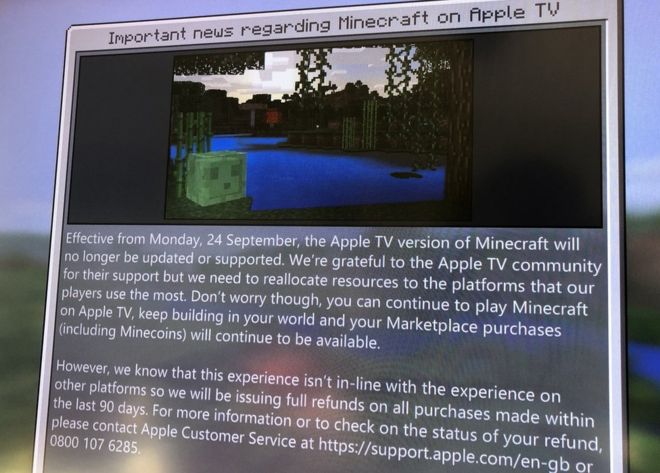 Nearly two years following its tvOS launch, Microsoft has made the decision to pull Minecraft for Apple TV because there weren’t enough players in the first place, BBC News said Tuesday.

Minecraft made its Apple TV debut in tvOS App Store in December 2016 after being announced and shown off at Apple’s October 2016 keynote. The Apple TV version cost $20 a pop. As of this writing, the game has been removed from the tvOS App Store.

A message to Apple TV players

Here’s the message Apple TV players saw in the app:

Effective from Monday, September 24, the Apple TV version of Minecraft will no longer be updated or supported. We’re grateful to the Apple TV community for their support but we need to relocate resources to the platforms that our players use the most.

Don’t worry, you can continue to play Minecraft on Apple TV, keep building your world and your Marketplace purchases (including Minecoins) will continue to be available.

While developer Mojan did its best to support the Apple TV version of Minecraft with regular updates that brought regular bug fixes, improvements and feature parity with other editions (like cross-platform multiplayer), the effort didn’t work out as they hoped.

For games such as Minecraft which require complex control schemes, Apple’s set-top box isn’t the best gaming platform because Apple TV doesn’t come bundled with a dedicated game controller. Even though Apple no longer requires tvOS games to support its silly Siri Remote, the company’s guidelines for third-party controller support on tvOS are still too restricting.

Even Minecraft developer Mojang has acknowledged as much, writing that “we know that this experience isn’t in-line with the experience on other platforms.” To that end, the company will be issuing full refunds on purchases made within the last 90 days.

Microsoft is advising that tvOS players contact Apple’s customer service for more information or to check on the status of their refund.