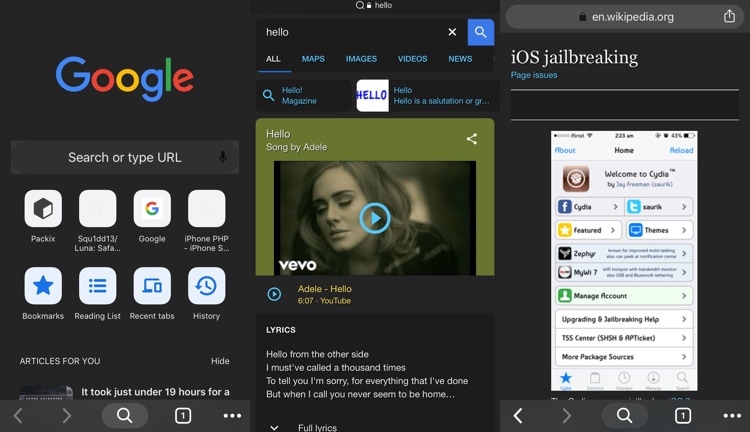 Dark Mode-based jailbreak tweaks have become severely cliché in the modern jailbreak community, but a pair of new tweaks dubbed Deluminator by iOS developer FoxfortMobile and Nebula by iOS developers Squ1dd13 and Muirey03 finally offer something unique in the Dark Mode space.

While the majority available Dark Mode-based jailbreak tweaks concentrate on transforming the aesthetic of app user interfaces, Deluminator and Nebula instead focus on the web pages you load in your iPhone or iPad’s mobile web browser.

For those that have used Dark Mode jailbreak tweaks in Safari before, you might remember how the web pages you visited were never impacted by it. That’s because managing support for the internet’s seemingly endless catalog of websites requires a complicated formula.

Both tweaks tackle similar tasks, but each one takes a different approach by providing alternative features; likewise, each tweak comes with a different price tag. Upon comparing the two, you’ll ultimately need to decide for yourself which one is worth the plunge.

One of the most significant differences is that Deluminator is meant to work alongside other Dark Mode tweaks like Eclipse or Noctis. It colorizes web pages, but not the web browser app itself. On the contrary, Nebula tries to be an all-in-one solution. It themes the website and the app you’re viewing it in as well.

Another significant difference is that Nebula provides more customization regarding website colorization while Delimunator is primarily automatic. Deluminator has the option to invert website colors without detecting its dominant color, but Nebula provides the user with a full color picker in case pitch black isn’t your thing. 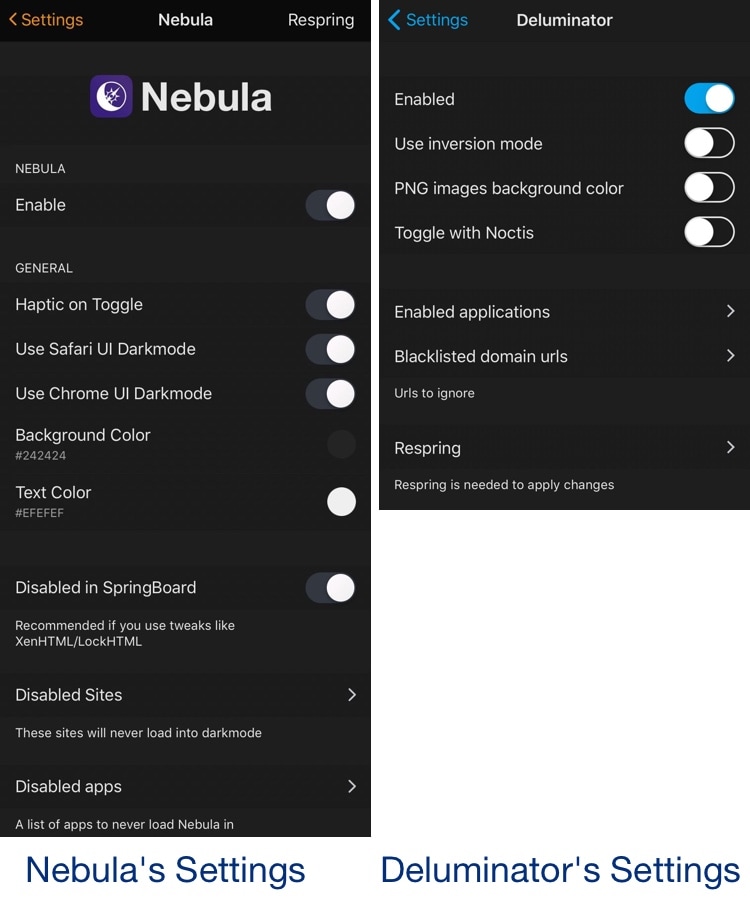 Both tweaks offer blacklist and whitelist capabilities, allowing you to choose which apps and websites the Dark Mode effect impacts. In addition to basic web browsers, the tweaks apply to web view-enabled apps like Cydia or eBay.

Apart from the distinctions mentioned above, differences between each of the tweaks are far and few in between apart from a few options found in the tweaks’ respective preference panes. These include haptic feedback when toggled and support for PNG image transparency, among other things.

Both tweaks are available in Cydia’s Packix repository, with Deluminator costing $2.80 out of pocket and Nebula costing $2.00 out of pocket. Depending on how much customization and universal app support you want, Nebula may offer a slightly superior value, but both tweaks will get the job done if you’re a hardcore Dark Mode addict.

Deluminator and Nebula each work on jailbroken iOS 11 devices and the developers of both tweaks are actively listening for user feedback regarding website incompatibilities. That said, you can’t really go wrong with either option, depending on your needs.

Are you excited to finally see Dark Mode jailbreak tweaks extending support to web pages rather than just application interfaces? Let us know in the comments section below.