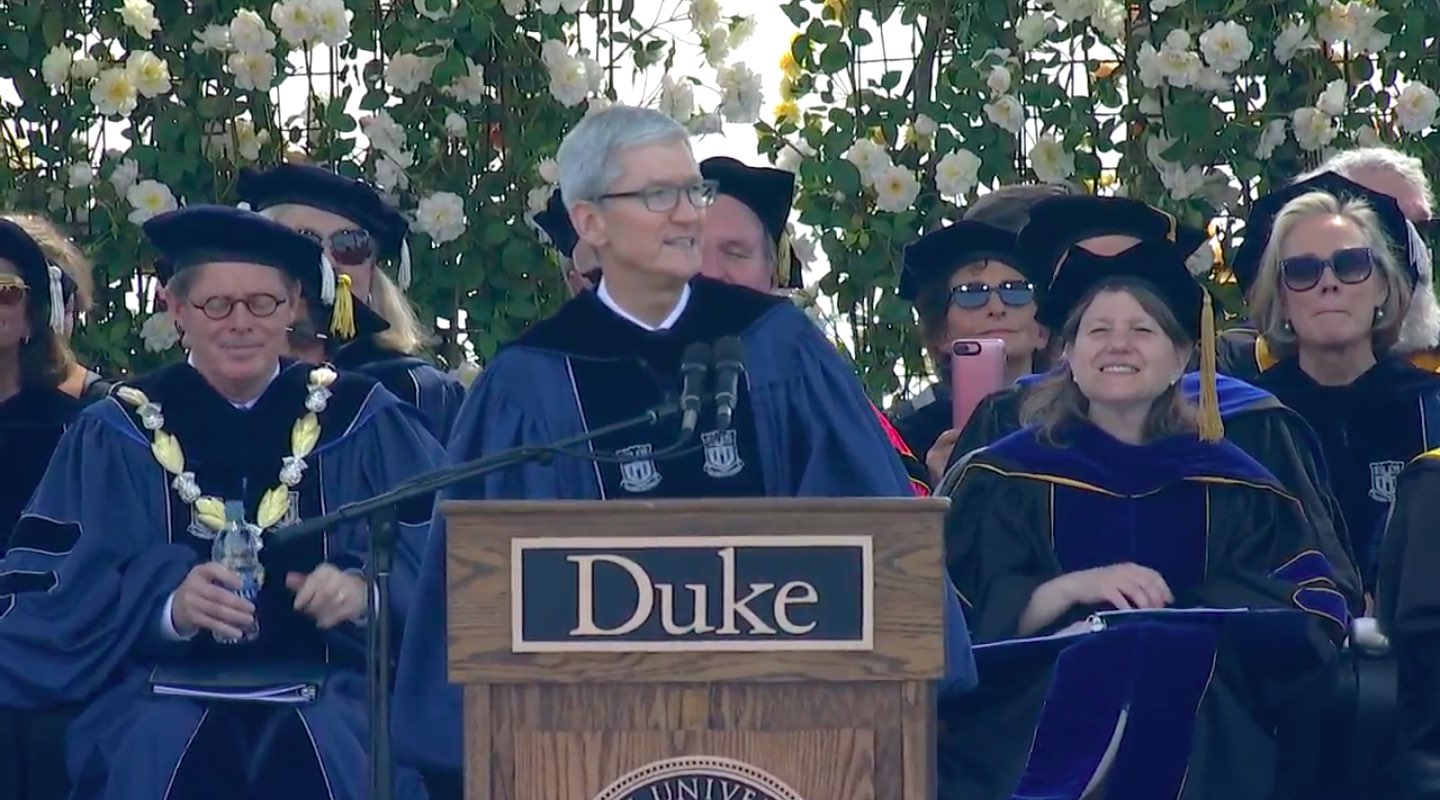 “Hard to believe it’s been nearly 30 years since I was celebrating with my Duke University classmates and these lifelong friends,” Cook tweeted.

“The question we ask ourselves is not what can we do, but what should we do,” Apple’s chief executive told graduates yesterday. “Because Steve taught us that’s how change happens. And from him I leaned to never be content with the way things are,” he continued. “I believe this mindset comes naturally to young people—and you should never let go of this restlessness.”

Congratulations and thank you to the @DukeU class of 2018! Graduates, be fearless! pic.twitter.com/XeDV9seX0E

Excited to be back at Duke for commencement and spend time with @JonScheyer @GraysonJAllen pic.twitter.com/FkQI2srer4

In delivering his commencement address, the executive spent some time talking about Apple’s commitment to protecting user privacy, climate change and Apple’s use of renewable energy.

Watch Cook’s commencement address in the YouTube video embedded below.

Here’s an interesting excerpt from the commencement address, transcribed by MacRumors:

The pace at which progress is possible has accelerated dramatically. Aided by technology, every individual has the tools, potential, and reach to build a better world. That makes this the best time in history to be alive. Whatever you choose to do with your life, wherever your passion takes you, I urge you to take the power you have been given and use it for good. Aspire to leave this world better than you found it.

I didn’t always see life as clearly as I do today. But I’ve learned that the greatest challenge of life is knowing when to break with conventional wisdom. Don’t just accept the world you inherit today. Don’t just accept the status quo. No big challenge has ever been solved, and no lasting improvement has ever been achieved, unless people dare to try something different. Dare to think different.

I was lucky to learn from someone who believed this deeply—someone who knew that changing the world starts with following a vision, not a path. He was my friend and mentor, Steve Jobs.

Steve’s vision was that great ideas come from a restless refusal to accept things as they are, and those principles still guide us at Apple today. We reject the notion that global warming is inevitable—that’s why we run Apple on 100 percent renewable energy.

We reject the excuse that getting the most out of technology means trading away your right to privacy. So we choose a different path: collecting as little of your data as possible and being thoughtful and respectful when it’s in our care.

Duke holds a university-wide commencement ceremony each year to celebrate the three graduating classes of that academic year. September 2017, December 2017 and May 2018 graduates from all ten Duke schools were invited to attend the 2018 commencement address.

Hard to believe it’s been nearly 30 years since I was celebrating with my @DukeU classmates and these lifelong friends. I’m honored to join the #Duke2018 Commencement today! pic.twitter.com/biPQ7taE8S

Duke also awards honorary degrees during the ceremony to “people who have exemplified the highest ideals and standards in their work.”