Rather than announcing just one new iPhone this year with two different screen sizes, Apple shook things up by announcing an entirely new iPhone X with a 5.8-inch edge-to-edge OLED display alongside their typical 4.7-inch and 5.5-inch iPhone models.

There’s bound to be some confusion about some of the most important specs between the devices, so in this piece, we’ll talk about the differences in weight, dimensions, and battery life as we do every year.

Battery life is perhaps one of the biggest factors when it comes to choosing the right iPhone for you. Typically, the Plus-sized models get improved battery life because of the larger surface area that makes packing a bigger battery possible, but it’s still good to know the details.

First, we’ll compare the smaller handsets to the iPhone X: 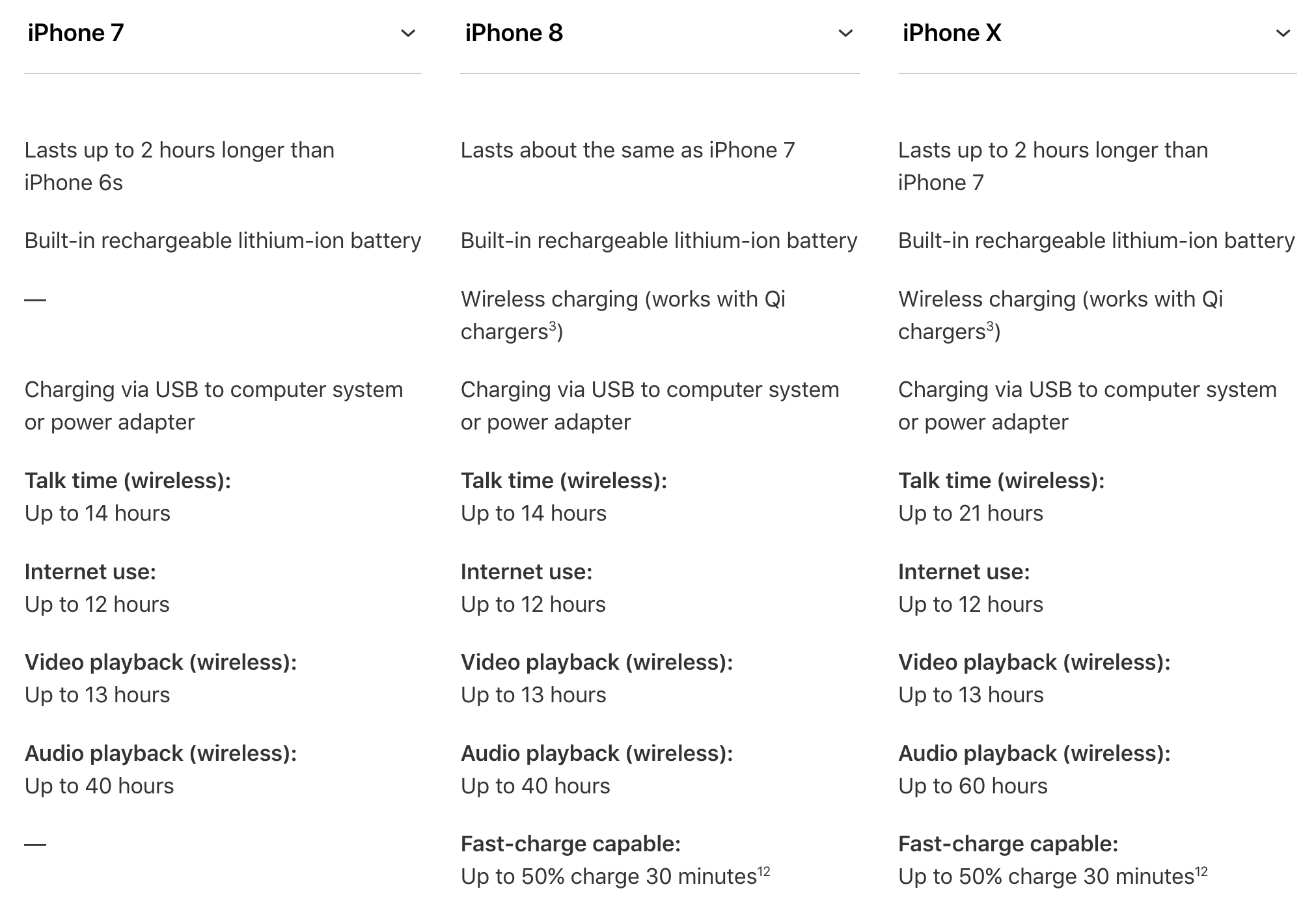 From here, we can see that the iPhone 8 lasts about as long as an iPhone 7 would, but an iPhone X can last up to 2 hours longer on a single charge than an iPhone 7 or 8 would. There are differences across the board, from talk time, to internet use, to audio/video playback.

On the other hand, only the iPhone 8 and iPhone X support fast-charge, allowing your battery to charge up to 50% from dead within half an hour. These are also the only two handsets that support wireless charging with a Qi-compatible wireless cradle.

Next up, we’ll compare the Plus-sized devices to the iPhone X: 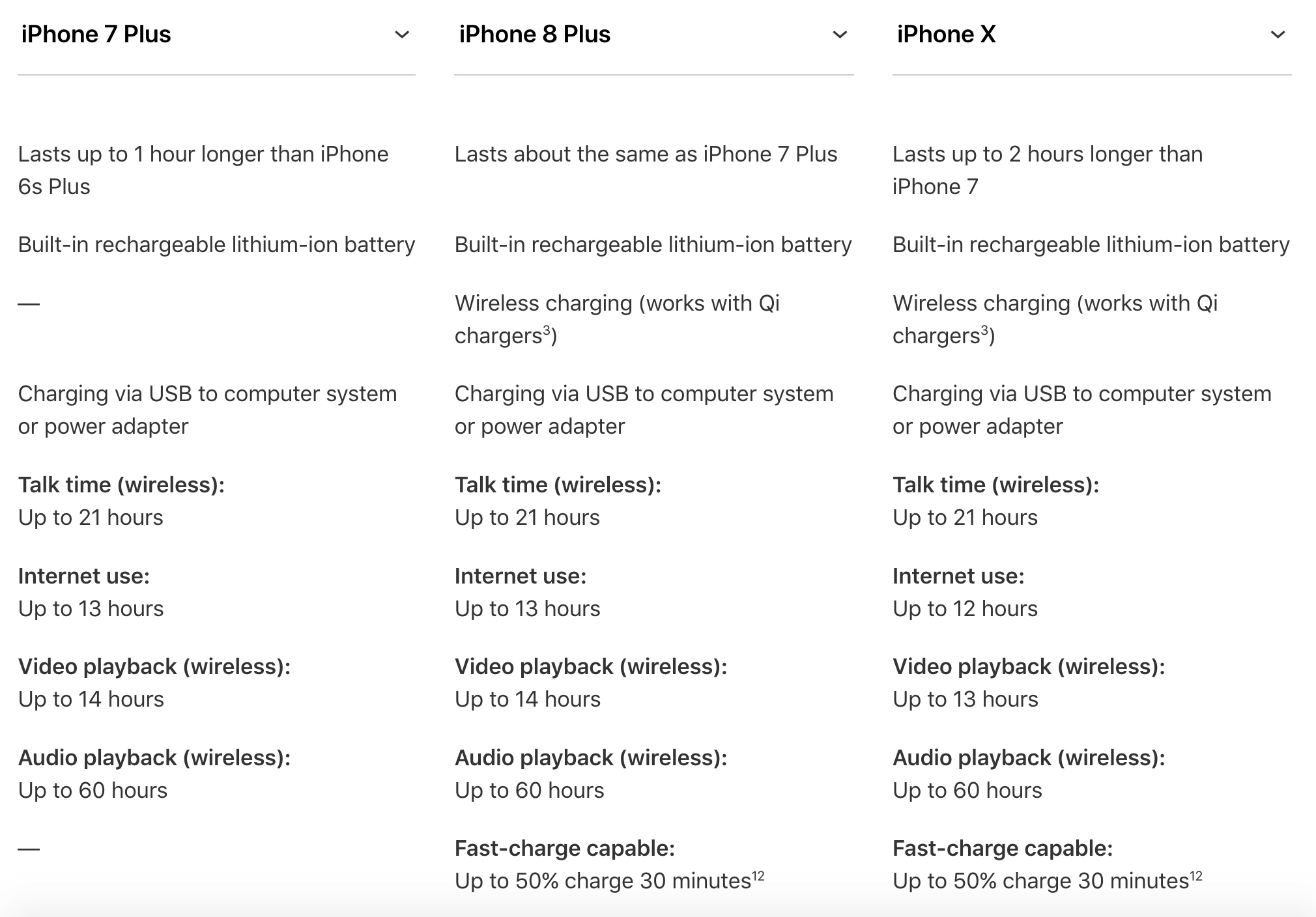 One of the other most popular questions is how the device will feel in your hand on a daily basis, and for that reason, we’ve got a comprehensive comparison of size and weight between the three handsets to show you.

Once again, we’ll compare the smaller handsets to the iPhone X first:

What we see here is that there’s a marginal increase in depth, height, and width between the iPhone 8 and iPhone 7 that you probably won’t even notice on a day-to-day basis. In fact, you probably wouldn’t even see it if the devices were right beside one another. Regarding their weight, the iPhone 8 is about 7.2% heavier than the iPhone 7.

In conclusion, iPhone X is beefier than either the iPhone 7 or iPhone 8, so that might take some getting used to if you’re making the switch.

Next up, we’ll compare the Plus-sized devices to the iPhone X:

That said if you’re using a Plus-sized device right now and you’re considering the iPhone X, it will feel a lot like you’ve just bought an iPhone 8 or iPhone 7 until you glance at the mesmerizingly-large display, which dwarfs even the Plus-sized handsets.

Keep in mind that the iPhone 7/7 Plus and iPhone 8/8 Plus are nearly the same size as one another, so cases for each handset should be backward-compatible. With that in mind, if you have an iPhone 7/7Plus and you’re upgrading to the iPhone 8/8 Plus, you shouldn’t really need to buy a new case.

If you’re getting the iPhone X, on the other hand, Apple has never made an iPhone quite like it before. You’ll almost certainly need to buy yourself a whole new case to fit the new handset, regardless of whether you owned a 4.7-inch or 5.5-inch handset previously.

In terms of battery life, the iPhone 8 Plus is probably the way to go, but most people will want the latest and greatest features of the iPhone X, so a slight trade-off in battery life probably won’t make or break the demand for it.

If you’re also considering an Apple Watch Series 3 to go along with your new handset this year, then you might want to read up on how the Series 3 compares to the previous-generation Series 2.

Based off of the battery and size information recorded in this piece, have you decided which iPhone model you’re going to go with? Share in the comments below!