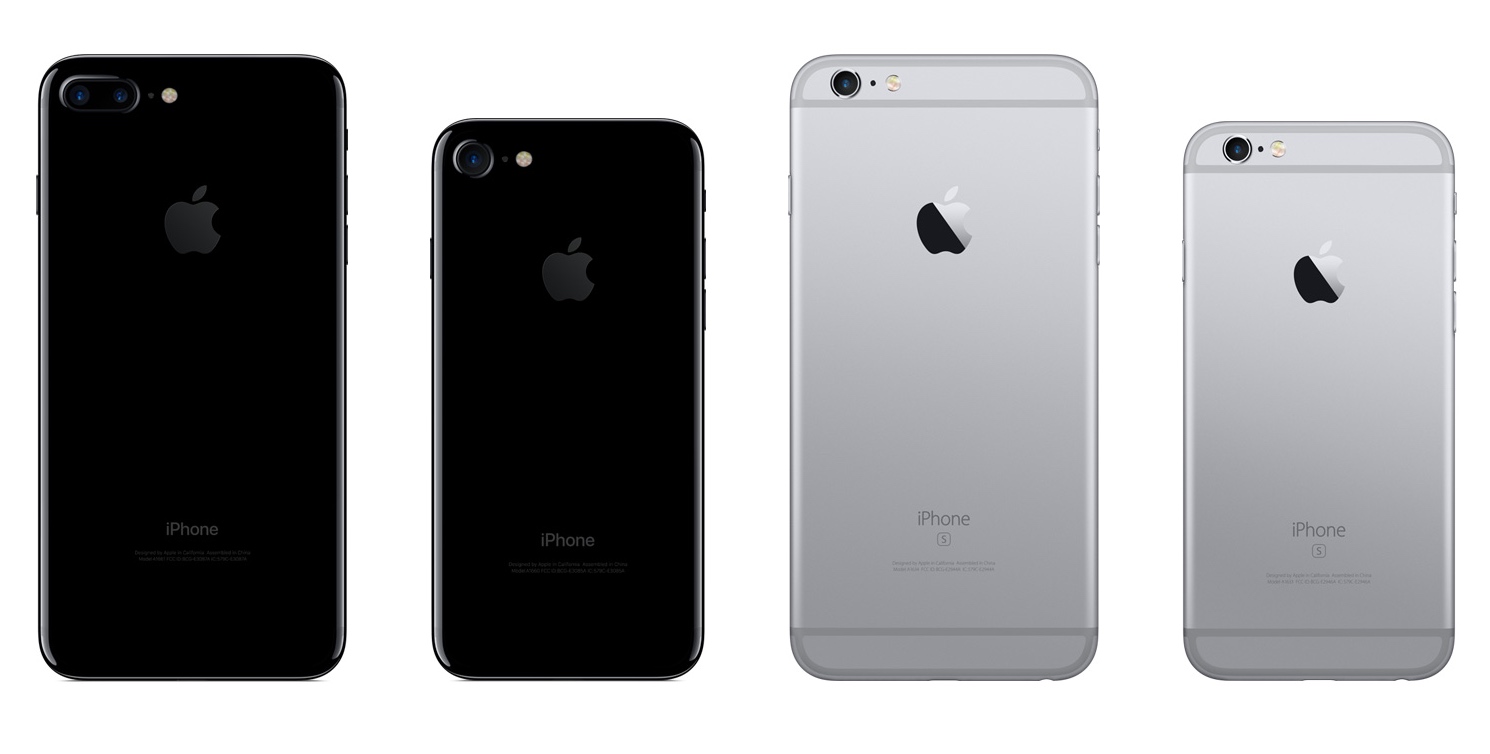 Apple’s iPhone lineup just got even better as of Wednesday’s product unveiling. Not only are the devices super fast, more power-efficient, and available in new finishes, but they also come with a slew of new finishes that owners of previous-generations of iPhone will drool over.

In this piece, we’ll compare the iPhone 7 to the iPhone 6s so you have an idea of the differences in size, weight, and even their expected battery life.

Because battery life is one of the biggest things when it comes to smartphone selection, we’ll start with that. Apple made a strong argument for selling the iPhone 7 when they said you should see about two hours more, on average, in battery life with the iPhone 7 over the iPhone 6s.

For the most part, the battery life is going to be the same when the handset is sitting standby on your desk or pocket or when it’s being used to talk on the phone via cellular tower, but the iPhone 7 has some significant battery savings for audio playback (wirelessly, at that), internet usage, and video playback.

Apple has made some significant changes to the iPhone’s audio playback that utilize digital signals from the Lightning port instead of analog from the 3.5mm headphone jack, and a new custom wireless Bluetooth chip is more energy efficient than ever before, yielding unsurpassed battery life performance with Apple’s new Bluetooth AirPods that we’ve never seen in wireless headphones before.

Audio playback, on the other hand, takes a 10-hour dip on the iPhone 7 when compared to the iPhone 6s, and this is probably because wireless transmission eats more power than having a wired connection.

Of course, it’s going to be the specs of the iPhone 7 Plus, which has the biggest battery between Apple’s two new handsets, that will raise the most eyebrows. How do those compare? Let’s take a look…

Both iPhones get the same 16-day standby time rating and video playback rating, but it’s the web browsing experience where the iPhone 7 Plus seems to shine the most, upping the iPhone 6s Plus from anywhere between 1-3 hours depending on the type of wireless radio you’re using.

It may seem like there are some pros and cons between the battery life of the current and previous-generation iPhone, and you’d be right to feel that way, but we think most people spend more time web browsing than listening to music on their iPhone from day-to-day, so for most people, these battery specs are probably going to feel better; a welcomed change for iPhone users.

With the new finishes that come on the iPhone 7 and iPhone 7 Plus, you might be wondering if there’s any change to the size and weight and whether or not your old iPhone 6/6 Plus or iPhone 6s/6s Plus cases are going to fit.

Well, just to answer your question about the cases really quickly, it’s probably a no because the camera hump is completely different on the iPhone 7 and iPhone 7 Plus. It’s actually quite a shame, because the iPhone 7 carries the exact same dimensions as the iPhone 6s: 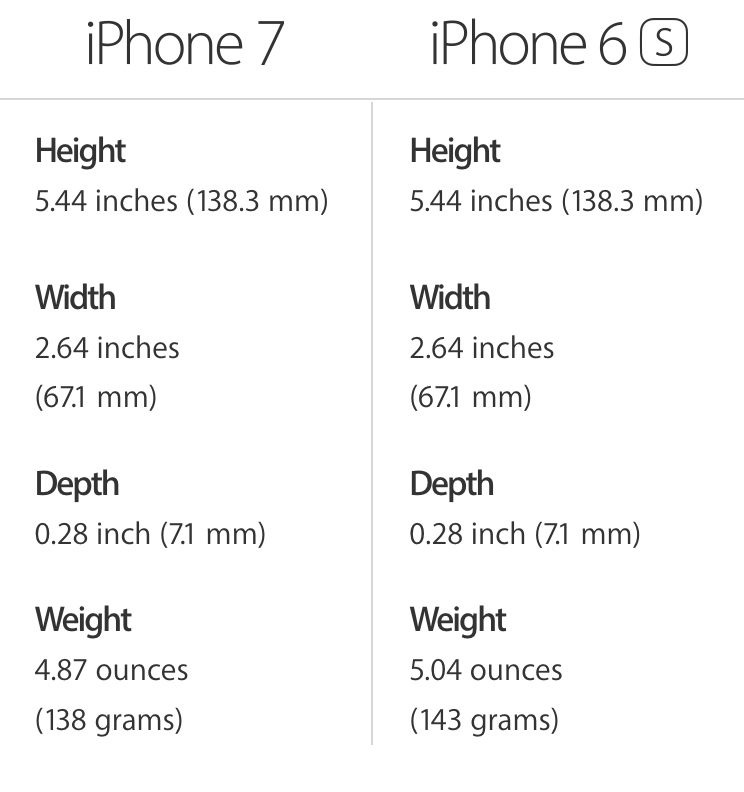 In terms of weight, the iPhone 7 has actually managed a reduction over the iPhone 6s. In going from 5.04 ounces to 4.87 ounces, the new iPhone 7 is now 0.17 ounces lighter than the previous-generation handset. To put that into perspective, that’s 3.4% lighter.

Likewise, the iPhone 7 Plus carries the exact same dimensions as the iPhone 6s Plus, while the weight is the only true difference: 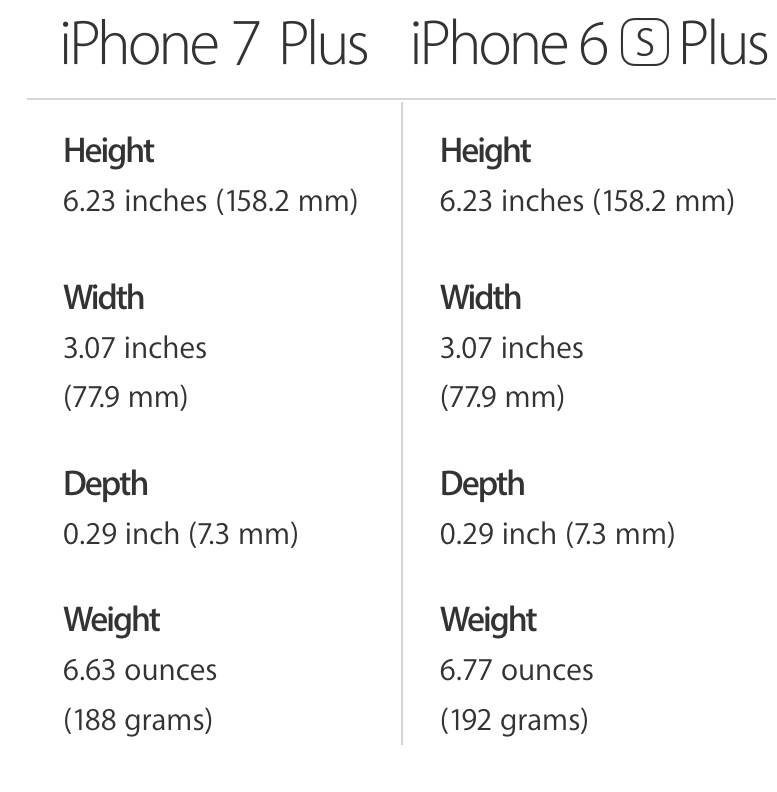 Overall, the small weight difference between the current and previous iPhone generations is unlikely to be felt in your hands, and the dimensions are exactly the same, so they’re very comparable to one another in this respect.