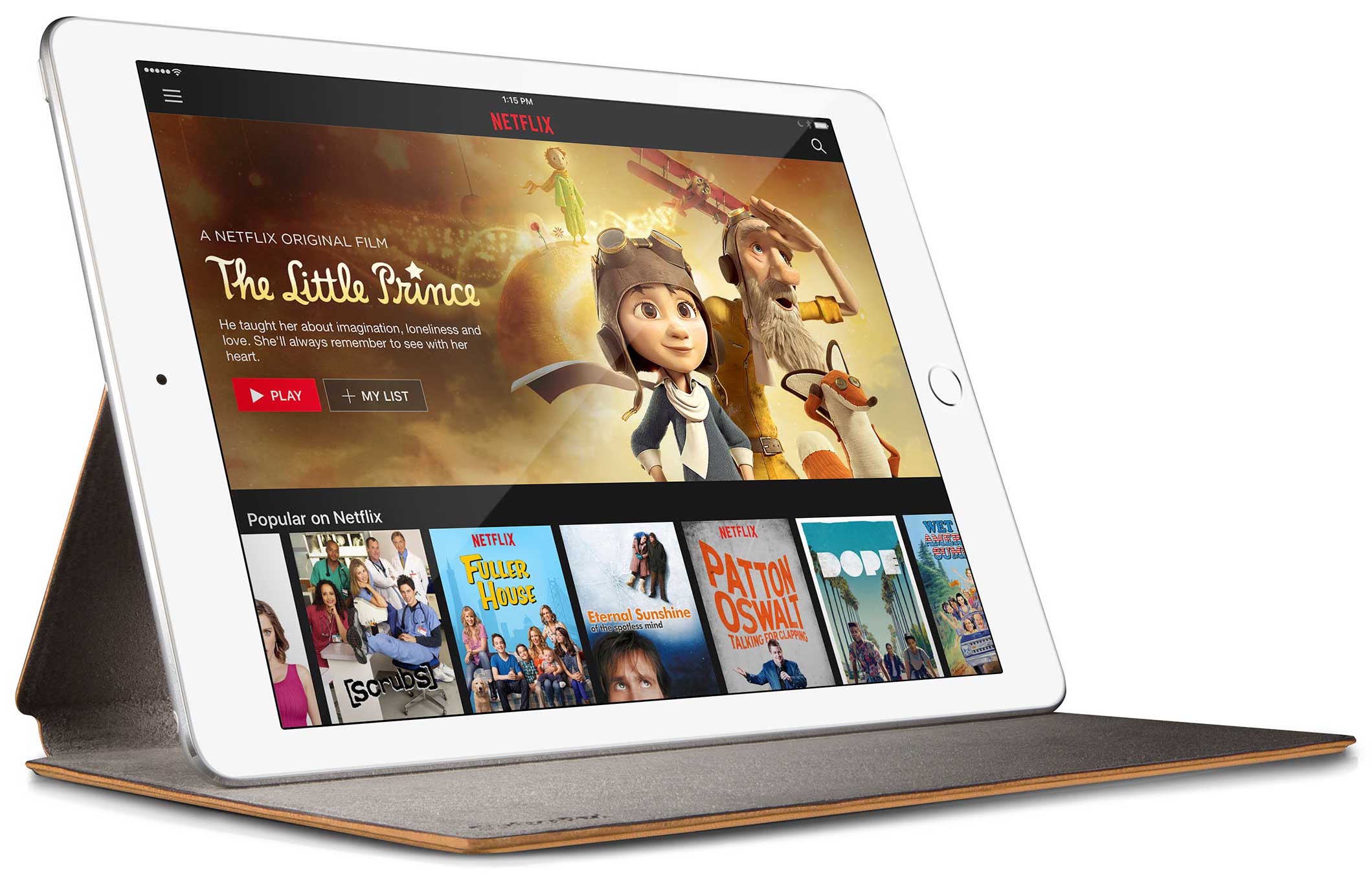 There was a lot of big news regarding 4K and HDR video content recently. Apple launched the new Apple TV 4K that has support for multiple forms of HDR (including Dolby Vision) alongside 4K. The iTunes Store also got new 4K and HDR content. If you made purchases that are now available in 4K, Apple would even upgrade them to 4K for free. Lastly, Apple has dramatically brought down the price of 4K, making it the same price as any other HD videos in iTunes. It didn’t stop there, however, as HDR video is also now available on the new iPad Pros running iOS 11.

The new iPad Pros have gorgeous new screens. They are brighter, less reflective, and more vivid than any in years past. They also feature ProMotion which can refresh the screens at 120Hz. One new feature that flew a bit under the radar, was HDR support. Since iTunes videos didn’t support HDR, and app developers didn’t build it in, there was no real use for it until now.

If you have a 2017 iPad Pro with iOS 11 installed, you can now watch HDR video content from the iTunes Store. 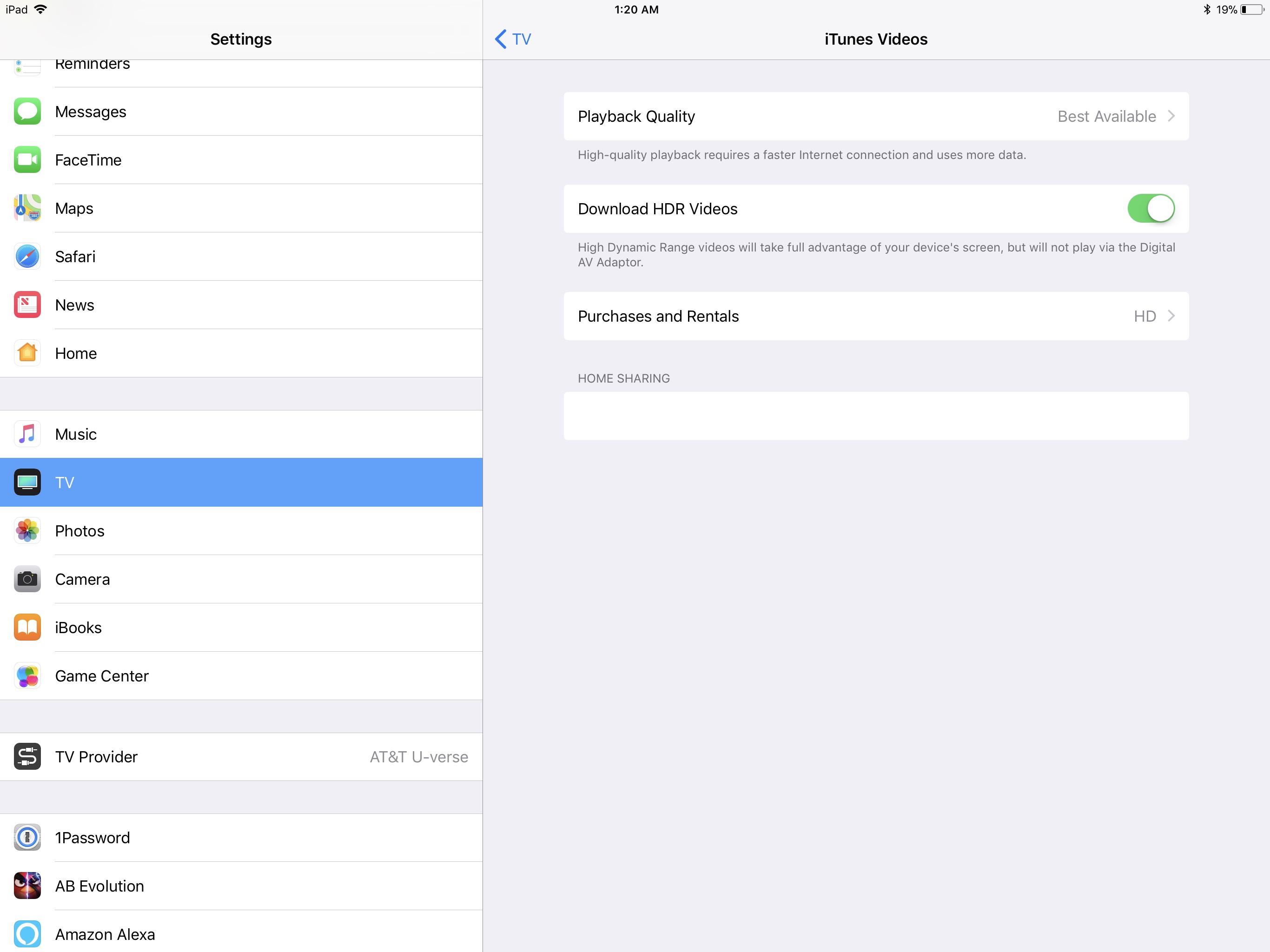 Luckily, getting HDR content is super easy. First, head into the settings app. Choose TV from the list of sections. then choose iTunes Videos. Inside this menu, there is a toggle on whether to download HDR videos.

Now you just need content to actually watch. You can start by either viewing your previous purchases, or head to the iTunes Store to purchase some new content. 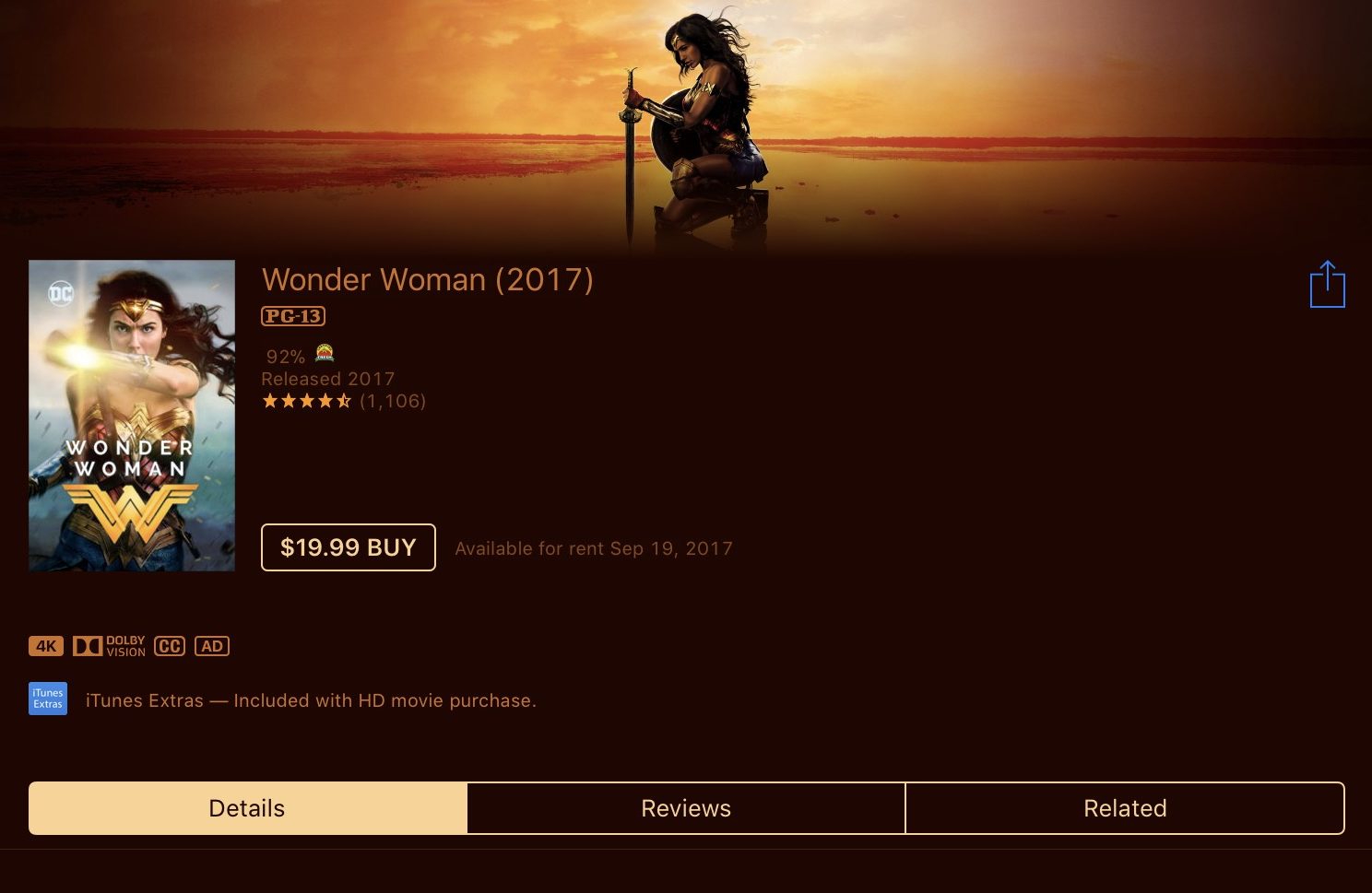 How does it compare

The big question is, how does it compare to standard, non-HDR content? I’ve always been a big proponent of the fact that 4K isn’t the next big revolution, HDR is. 4K just happens to be coming along for the ride. 4K is just an increase in pixels, but HDR really makes a difference in how good the content looks.

When viewing HDR content on your iPad, there is a clear difference. Colors are much more vivid. Scenes have more contrast. Blacks are deeper than they normally are. Of course, it isn’t an OLED display, so they aren’t as dark as they could be, but darker than normal. Overall, it just looks better.

For a good idea of how it looks, check out the video above, but here are a few screenshots if you don’t have the time. Take into consideration that this is viewed threw a camera lens and colors pop even more in real life. 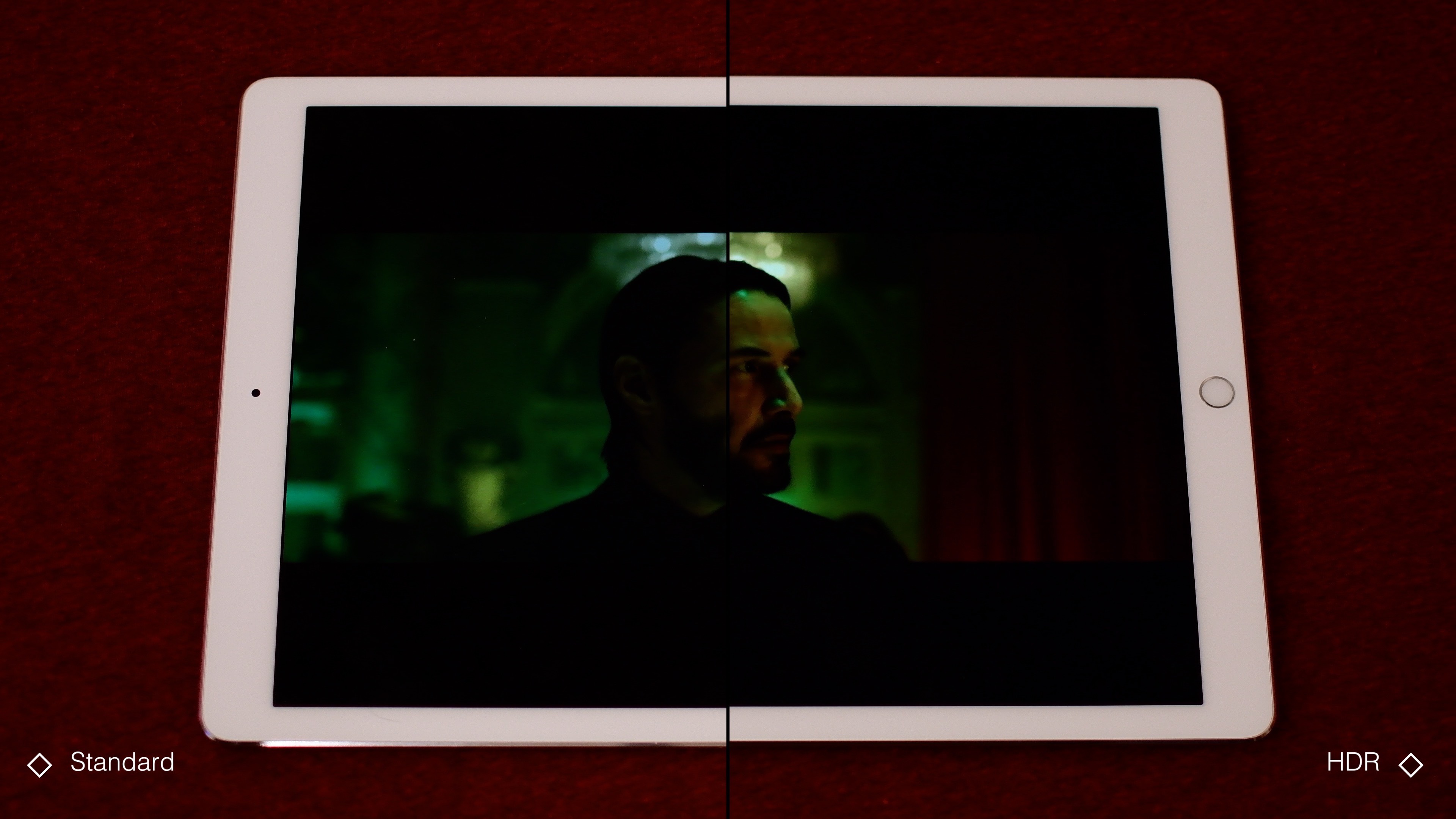 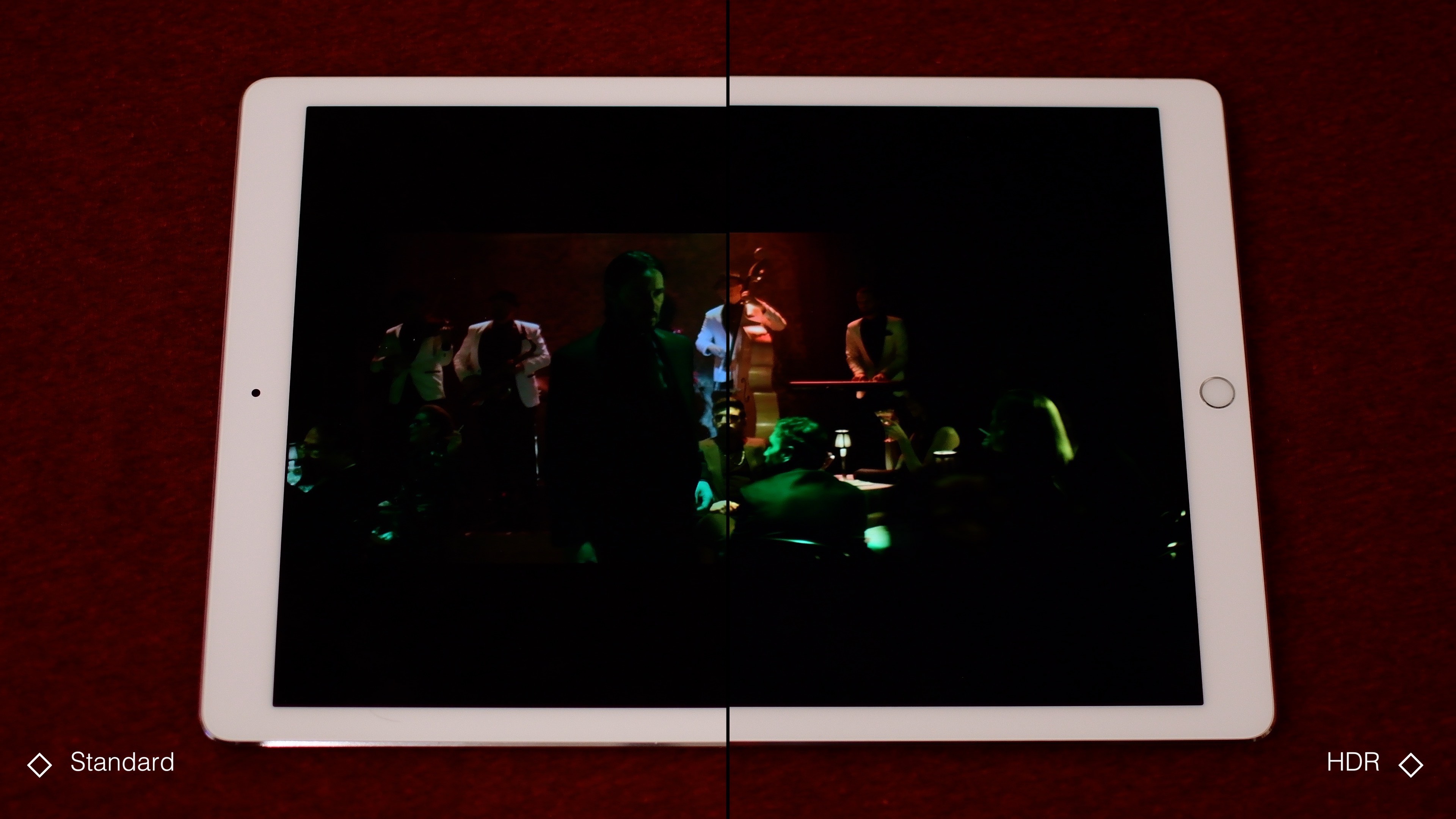 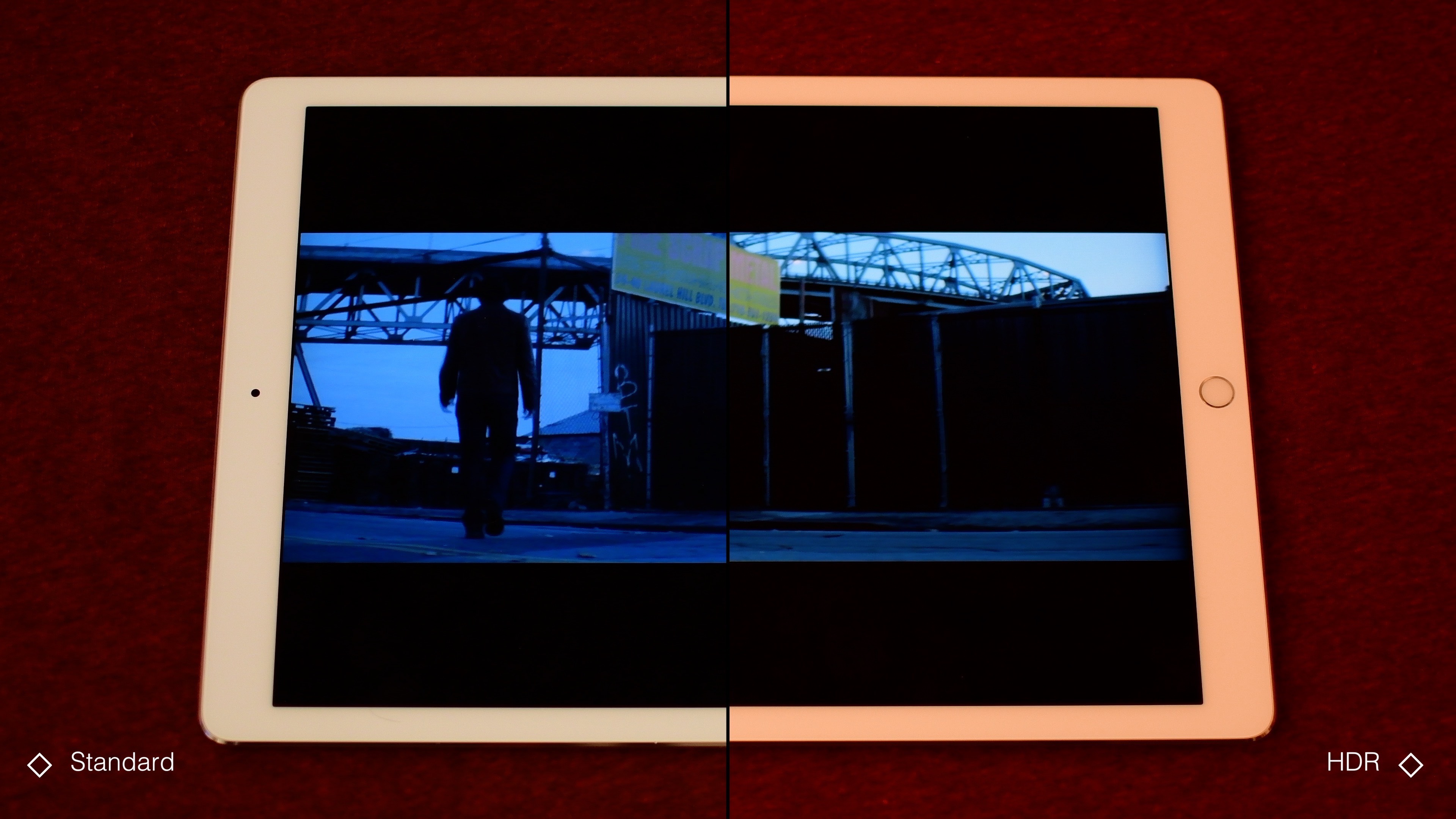 While HDR looks great overall, there are a few limitations here. To start, there is still no 4K support. This is a bit of a bummer. Of course, the iPad Pros don’t have 4K displays, but they are above 1080p and would see a noticeable jump in quality with 4K footage.

Second, since they aren’t OLED, the black isn’t as deep as it would be otherwise. HDR excels on OLEDs, but it still does great on Apple’s Retina Displays.

The last limitation, is that there is no 4K out. Apple sells a first party digital AV adapter with an HDMI out. However, if you plug your iPad Pro with HDR content into a 4K HDR TV, you won’t get to take advantage of it.

I’m super excited for the new Apple TV, but getting HDR support on my iPad Pro is also a great surprise that I’m sure to take copious advantage of. Let us know down below what you think of HDR and if you will be trying it out on your iPad Pro.