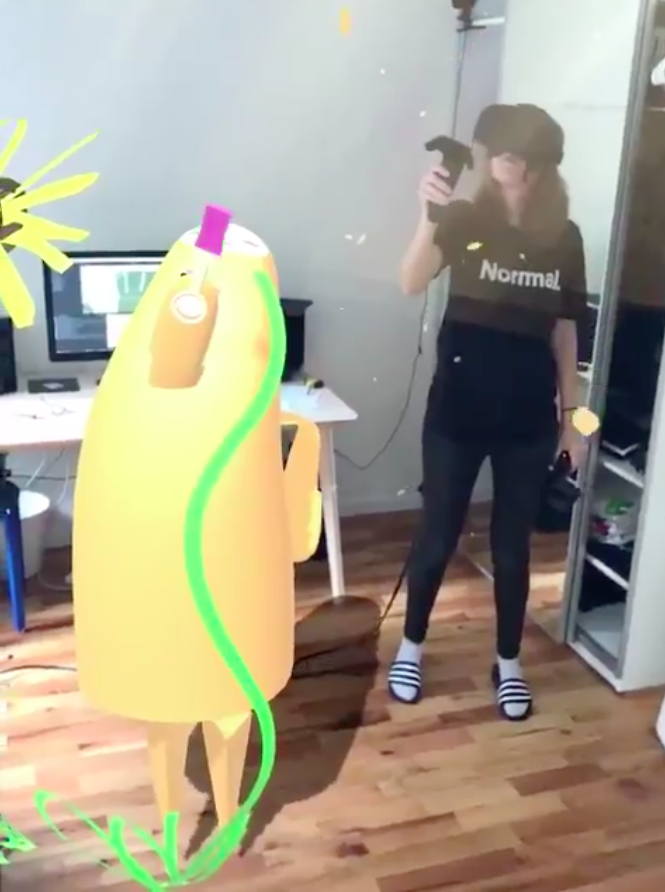 Unlike virtual reality which completely immerses you in computer-generated images, augmented reality superimposes virtual objects on top of your world rather than close it out.

Mixed reality, on the other hand, (sometimes called hybrid reality) merges the two worlds so that physical and digital objects co-exist and interact in real time.

A new recently published demo combines an ARKit-driven app running on the Unity 3D engine on an iPad Pro with real-time input from HTC’s Vive virtual reality headset and controller. Created by NY-based virtual reality developer Normal VR, the app features a cute avatar drawing a virtual painting in the middle of the company’s office.

What’s really interesting about it is the fact that a person wearing a HTC Vive is revealed when the camera pans right, proving that the app captures the moves of the person in real-time and projects the resulting actions in their real world through augmented reality.

“This is going from East Coast to West Coast (server) and back. We definitely do some extrapolation to account for ping,” developers wrote. You could easily imagine the possibilities for remote interactions between people across the globe in mixed reality.

Not sure about you, but I’m really impressed by this demo.

There’s a lot going on here as this app brings objects from the virtual world into the real one, in real-time—not only does the avatar realistically replicates the person’s actions, it shows the digital painting on top of the real world as it’s being created, updating it constantly.

Welcome to the future of mixed reality!

Even Ikea has jumped on the AR bandwagon by partnering with Apple on an ARKit-powered app that will let you try out virtual furniture in your home, with support for in-app ordering.

The beauty of ARKit is that it does all the heavy lifting, allowing developers to focus on app design rather than deal with things like plane detection, lighting estimation, tracking, etc.

Using computer vision and other techniques, ARKit does all that by analyzing live camera feed and data from iPhone or iPad’s built-in sensors. ARKit requires the A9 or A10 chip, meaning augmented reality apps will require an iPhone 6s or newer or one of the latest iPad models.