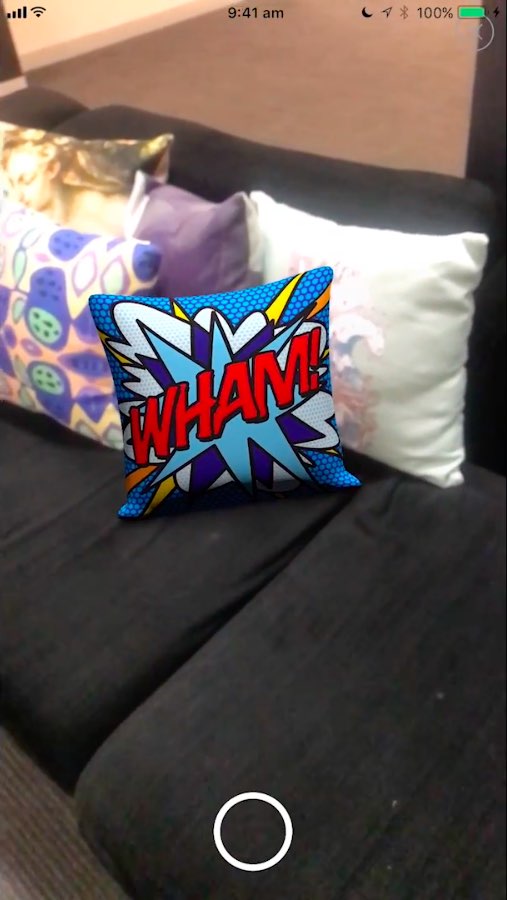 The simple proof-of-concept app allows the user to place virtual cushions (and other home decor items) on a couch and other pieces of furniture in their real world, but without the psychedelic surface-shifting effect plaguing many other AR platforms.

This app clearly proves that home decor shopping in augmented reality beats having to drive to a store just to see how that cushion would look like on a bed that isn’t yours in a showroom that shares little resemblance to your own home.

The video demonstration, embedded below for your viewing pleasure, highlights the full sophistication of ARKit’s reliable plane and object detection and precision tracking. It’s remarkable that all of this is happening so fluidly without any special hardware involved.

ARKit uses machine learning, artificial intelligence, computer vision and sophisticated algorithms to analyze live camera feed and “see” the world around you. It also taps into data from on-board device sensors, such as the accelerometer and gyroscope, to detect horizontal planes in your real world, determine local lighting conditions and so forth.

Those kinds of ARKit-powered apps should be even better on iPhone 8 due to the rumored rear-facing 3D laser sensor that will allow the device to accurately sense depth and map objects.

Be sure to watch another sophisticated ARKit demo showing off an app that basically allows the user to map out the floorspace by walking around a room. It calculates total footage of the room and may even produce detailed blueprints that could be exported to CAD apps.

The future of furniture shopping looks bright, too, as furniture giant Ikea has partnered with Apple on an ARKit-powered app of its own that promises to let users try out virtual furniture at home before placing an actual order right inside the app.

Just imagine the possibilities: with Ikea’s app, you could make sure that the bookshelf you’ve been eyeing for some time would fit in that corner—again, without being bothered to actually, you know, visit one of their stores.

Are you excited for ARKit-powered apps?