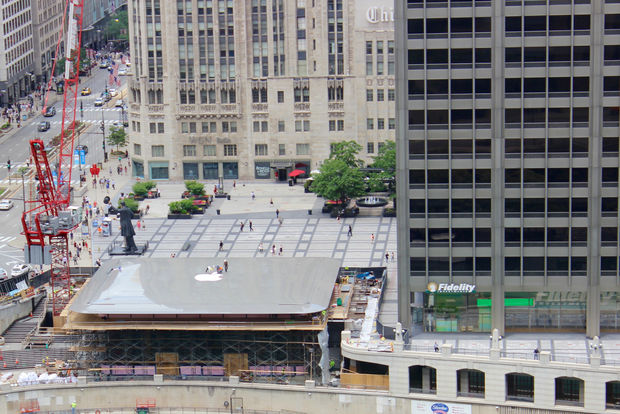 Apple is putting finishing touches on a new store on Chicago’s North Michigan Avenue and one particular design detail immediately jumped out at us: an Apple logo on the top center of the building, making the flagship store look as if a massive MacBook Air just landed.

“Our store on North Michigan Avenue has welcomed more than 23 million customers since it opened in 2003,” said Apple spokesman Nick Leahy in 2015. “We’re now creating something even more remarkable for Chicago.”

As reported by Chicago publication DNAinfo, less than an hour later crews rolled up the logo and took it away. The logo did not appear on store renderings dated 2015.

It’s unclear whether it will be reinstalled.

The upcoming 20,000-square-foot flagship outlet was designed by London-based Foster+Partners. As evidenced by the video, it consists of a huge glass box stretching from Pioneer Court to the riverfront.

The Chicago store’s attractive roof design reminds me of Apple’s awesome-looking 20,000 square-foot retail outlet in Istanbul, Turkey, which too features a striking all-glass exterior with an Apple logo on its rooftop, as seen above.