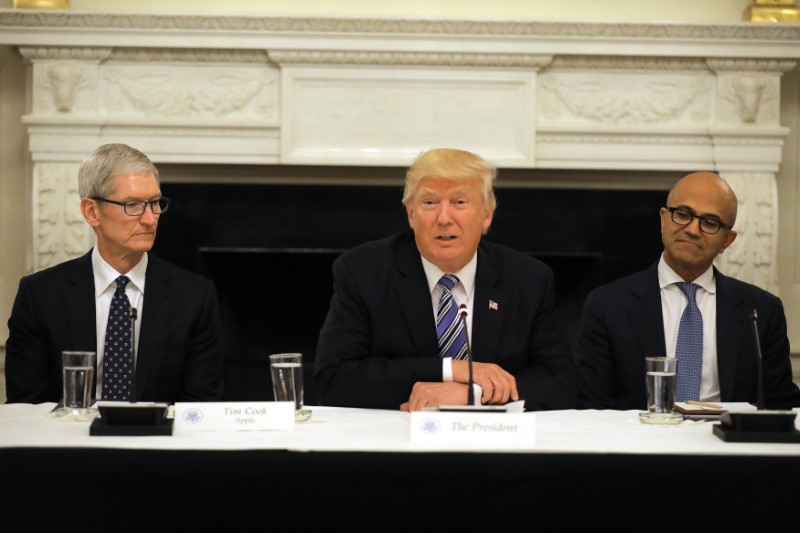 Apple CEO Tim Cook and other technology leaders met with U.S. President Donald Trump at the White House today to share their views on how the federal government could improve its public services and use technology to reduce government spending.

According to Recode, Cook told Trump that coding should be a requirement in schools.

Cook said the same thing when Apple debuted the Swift Playgrounds app, saying that “We believe coding should be a required language in all schools.”

Cook also suggested that the White House modernize the US government’s IT systems.

“The US should have the most modern government in the world. Today it doesn’t,” Cook said. The White House released a video of the meeting. Here’s what Cook said in full (edited for clarity):

The United States should have the most modern government in the world, but today it doesn’t. It’s great to see the effort that Jared is putting in working on things that will pay back in five and ten and twenty years.

That basic premise is not how it’s done today.

I would really encourage you to ask the cabinet how they’re measuring their parts of government and what they’re doing to serve the citizens that they’re meant to serve.

Unrelated, I think coding should be a requirement in every public school. We have a huge deficit in the skills that we need today versus the skills that are there. We are trying to do our part or, hopefully, more than our part in doing that.

But I think leadership from government is also key.

Trump said the government could save up to $1 trillion over 10 years by updating its information technology systems, which should help cut costs and improve public services.

“Our goal is to lead a sweeping transformation of the federal government’s technology that will deliver dramatically better services for citizens,” Trump said. “Government needs to catch up with the technology revolution. We’re going to change that with the help of great American businesses like the people assembled.”

He called for a “sweeping transformation” of the government’s outdated computer systems.

Amazon’s Bezos added that the government should make more use of commercially available technologies and Palantir CEO Alex Karp suggested tapping into big data in order to catch and prevent fraudulent federal spending.

Trump’s remarks are available on the White House website.

Lmao – I almost had coffee coming out my nose this morning when I woke up to this facial expression. pic.twitter.com/p6a3FtVm1M

By the way, we’re running a caption contest for that photo top of post.