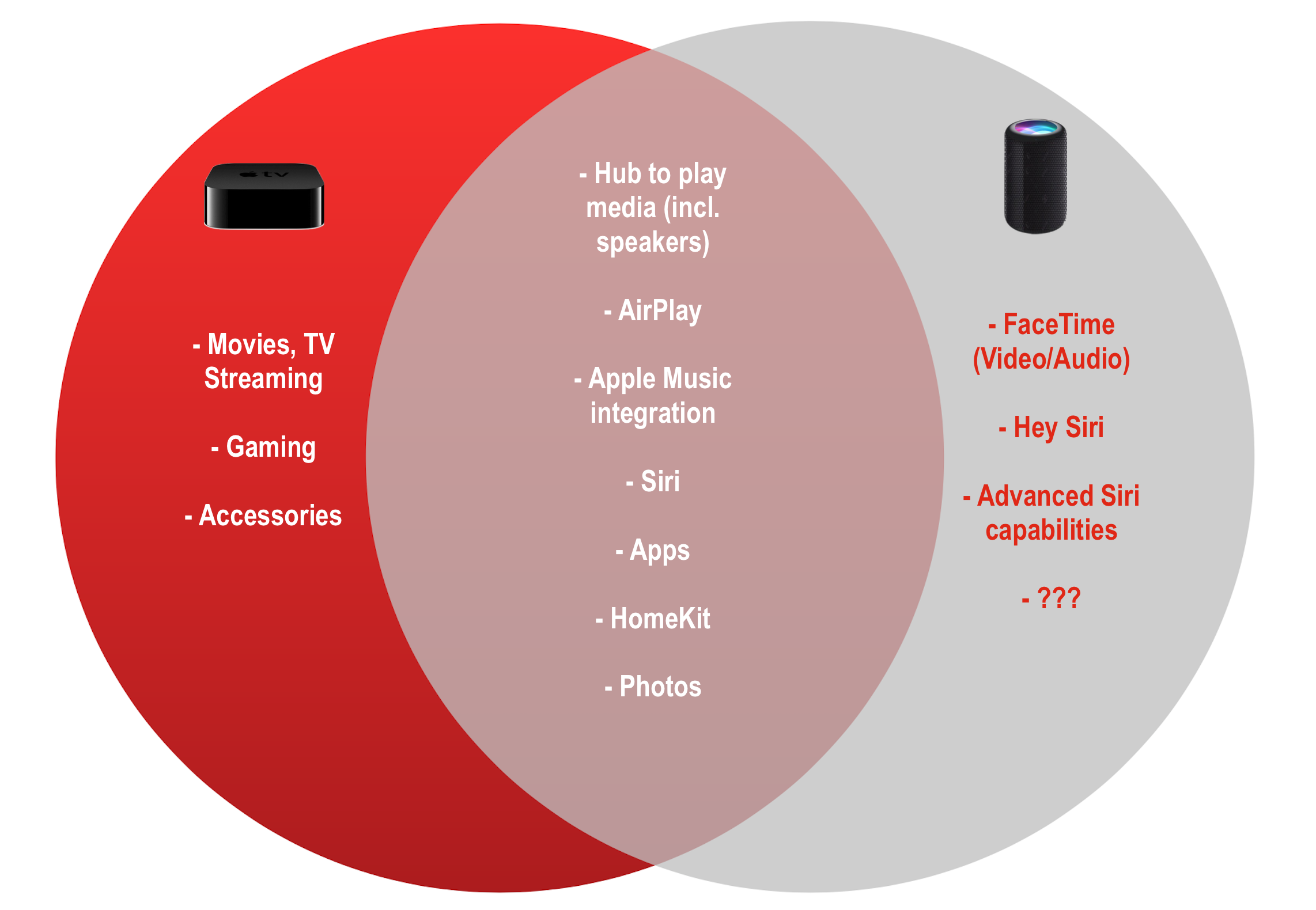 It’s only two more weeks until WWDC ’17, which means crunch time for experts and armchair analysts alike. A popular topic of gossip around this time of the year relates to one of Apple’s less pompous devices, one that’s been marketed for years as our low-key living room hub, as Siri on the couch and more recently as the silent orchestrator of our smart home.

Fittingly, chatter of that kind is indeed coming to a head again, yet before you rub your eyes and wonder how you could have missed the news of a 5th generation Apple TV, this time the similar sounding rumors swirl around a brand new device, the alleged Siri speaker. My cheap attempt at having you mix up the two devices for a brief moment there admittedly wasn’t a real zinger, however it does typify a potentially sticky situation for Apple: at least on grounds of what we presume to know, we – the customers – would be forgiven for mistaking the two on the fly.

If we indulge in a sketchy juxtaposition of each devices’ (purported) capabilities, it quickly begs the question of what we have been overlooking so far. It is declaredly fishy to make inferences about a device that is all but fictitious to this date, nevertheless there are pieces of information we can glean from competitors’ devices like Amazon’s Alexa, as well as telling interview snippets straight from the horse’s mouth. Does that make a comparison of the Siri speaker and Apple TV less premature or ill-founded? Probably not, but jotting down what we (think to) know does become insightful when we try to ascertain the spaces the two products are likely going to occupy in the customers’ minds and households. What’s the insight? Well, they could have a hell of a lot in common.

Always provided we don’t fail to understand the alleged Siri speaker correctly, the large overlap in features is on all accounts eye-catching. Both devices fundamentally vie for a central spot in your home, both offer to AirPlay (most of) your media, both boast Siri and HomeKit integration. The putative fork in the road is that unlike Apple TV’s focus on visual media, Siri speaker’s backbone will reportedly be advanced Siri capabilities and the simple fact that it will serve as a standalone speaker with formidable acoustic performance.

All these things considered though, is this going to be a unique enough selling proposition? It is clear that no product in Apple’s line-up sits as brazenly in the spot of the new arrival as Apple TV does. If this was a game of musical chairs, and the music stopped playing on June 5, Apple TV would be defiantly hogging the one spot designated for the shiny new speaker. Naturally, this opens the door for product cannibalization in either direction, and that’s where things get juicy. The implications for both products and their strategies mid to long term are plentiful. In my book, there’s three possible outcomes to speak of: the two product lines (keep) selling like hot cakes, them selling like damp and cold cakes, or the two lines merging into one. The determinant? The speaker’s x-factor, or lack thereof.

Which cake are you going to sell, Apple?

The most lucrative (and arguably still most probable) outcome in this tale of two devices is for Apple to quietly have a Siri speaker killer feature up their sleeve. It goes without saying that we’re dealing with hypotheticals and it could plainly be the case that we don’t know jack. In order to establish and sustain strong sales for both Apple TV and the new assistant, the latter would have to come up with some seriously innovative ideas; ideas that make the device indispensable to your household, without raining on your Apple TV’s parade.

What could that look like? In one of our previous podcast episodes of Let’s Talk iOS, we have speculated about built-in security features, but realistically your guess is as good as ours. Two distinct devices with two distinct purposes would entail little overlap, and in turn minimal cannibalization.

The cold cake theory is that analysts have indeed pretty much figured out the device prior to release and there is no blind spot on our radar. In other words, the overlap is real. Such being the case, potential customers would in all likelihood wind up pitting the two devices against each other and ultimately picking the one that comes closest to fitting their needs.

This route would most definitely spell product cannibalization, since only the hardcore would entertain both devices at home, plus the mere existence of Apple TV could already hamper the launch success of the Siri speaker. By the same token, current Apple TV owners could be swayed towards a more mobile AirPlay station and the existing customer base would effectively be split in halves. Before they know it, both devices could be relegated back to the company’s ominous ‘hobby’ status.

Lastly, the new Siri speaker could (organically or forcibly) usurp the role of Apple TV at some point down the line. Once launched, the people will vote with their wallets and it is not a stretch to imagine a smarter, more capable home hub by Apple outsell and eventually dwarf Apple TV. If a chunk of Apple TV owners in addition migrated to the Siri speaker, the product line itself would barely be feasible for much longer.

As a result, Apple could easily equip the more potent Siri speaker with streaming functionalities as soon as the tide has turned in the device’s favor. Customers would no longer have to weigh up two similar-but-different products, but rather purchase the same one and thereafter decide the role it will play in their household. Coffee table device or television box, whatever they see fit.

One way or another, the reported new arrival is going to make massive waves at and after WWDC 17. Are we witnessing the quiet axing of Apple TV or not? What’s Apple’s secret ingredient for the Siri speaker going to look like? Not much longer until we will know, so place your bet in the comments now!