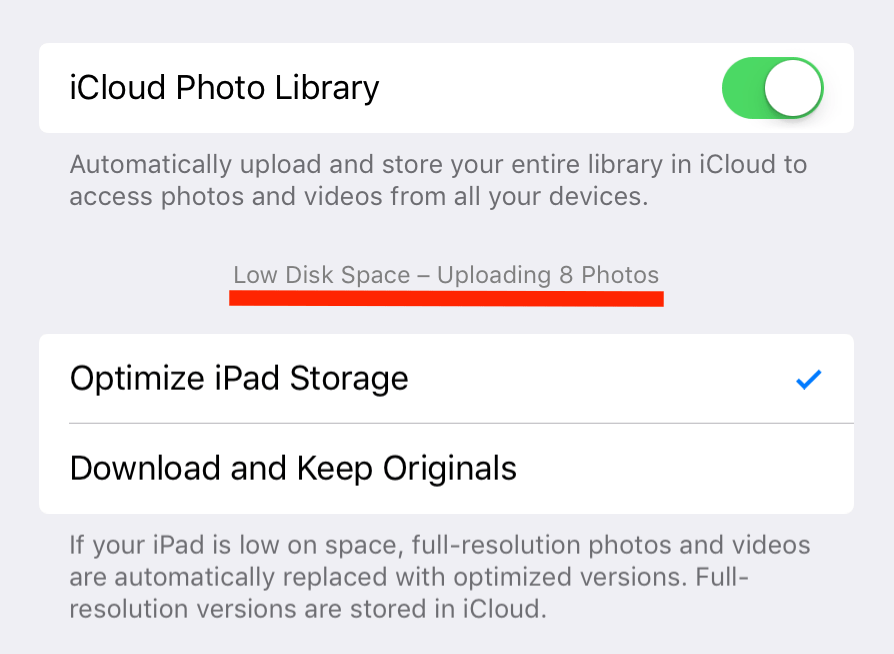 iCloud Photo Library is one of these great features that you think you don’t really need until you actually start using it. One of the promises of the service is that it automatically keeps every photo or video you take in iCloud. These photos and videos can then be accessed from any of your devices, assuming the feature is enabled on these devices. iCloud Photo Library is great… at least when it works as it should.

Photos not uploading to / downloading from iCloud

I recently ran into an issue where new photos were not showing on my iPad. Additionally, photos taken from that iPad wouldn’t upload to iCloud either. The most frustrating part is that the Photos app on my iPad didn’t display any sort of error message. My first reaction was of course to reboot the device, hoping it would help. Unfortunately, it didn’t.

Instead, I had to track down the problem by going to Settings > Photos & Camera where a barely noticeable error message said Low Disk Space – Uploading 8 Photos. Quite frankly, I doubt my mom would ever venture into the Settings app if she realized there was an issue with her iCloud photos. I’m hoping this is something Apple can make more obvious in a future software update.

Once I figured out that my problem likely resulted from low storage space, what I had to do was to actually make more room on my iPad. As the error message suggests, the iPad needs space to download new photos that were taken with my iPhone and uploaded to iCloud. For some reason, it also needs storage space in order to upload photos taken from the iPad, probably for caching purposes.

The confusing part is not so much the error message or how buried down the Settings app it is. The confusing part is that with about 300MB of free space, I apparently had plenty of storage on my device to at least upload new photos that were taken from my iPad. Because of that, I didn’t immediately think about regaining more storage space. In my head, it was pretty clear that 300MB was plenty to upload 8 photos and download another 4 or 5.

There are many ways you can make space on an iPhone or iPad. You can for example clear Twitter’s web and media storage, remove photos or videos, empty your Recently Deleted photos folder, clear Safari’s Offline Reading List cache, optimize downloaded music storage, remove unwanted books, or even delete apps.

Deleting apps is what I chose to do as it was the least drastic way of making space. I chose to delete GarageBand, an app I rarely use, yet one that eats up well over a gigabyte of storage space. 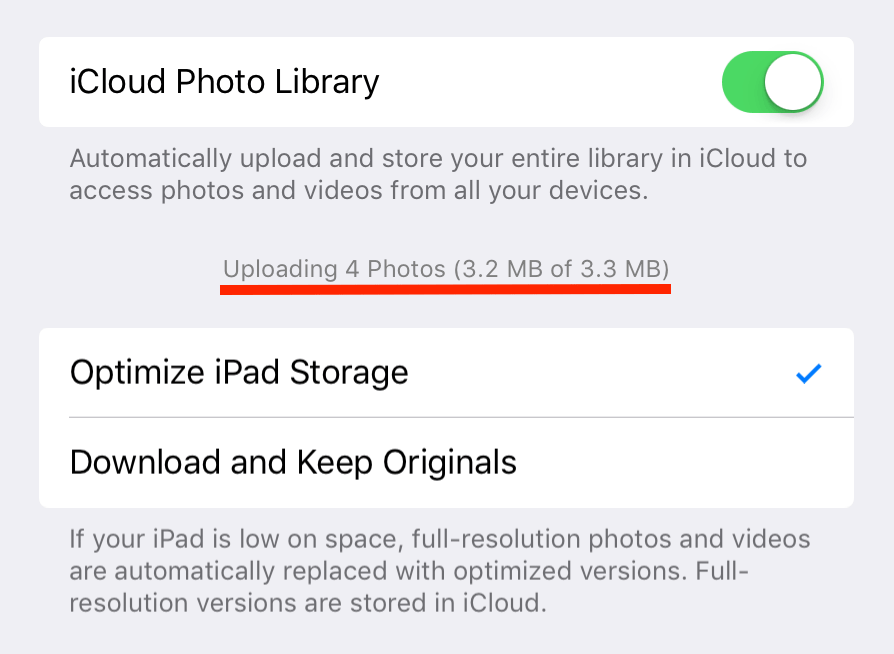 As soon as I deleted the app, uploads of photos taken on that iPad resumed, and missing photos that were already on iCloud Photo Library started downloading on the device as well.

If your iPhone or iPad stops uploading and downloading photos from iCloud, make sure to check your settings. If it is telling you it’s low on disk space, don’t get fooled by the available space you may have on your device. It seems that anything under 500MB of free space is just not enough for the device to upload/download new items. If that’s the case, consider deleting a few media files from the device and uploads/downloads should resume shortly after.