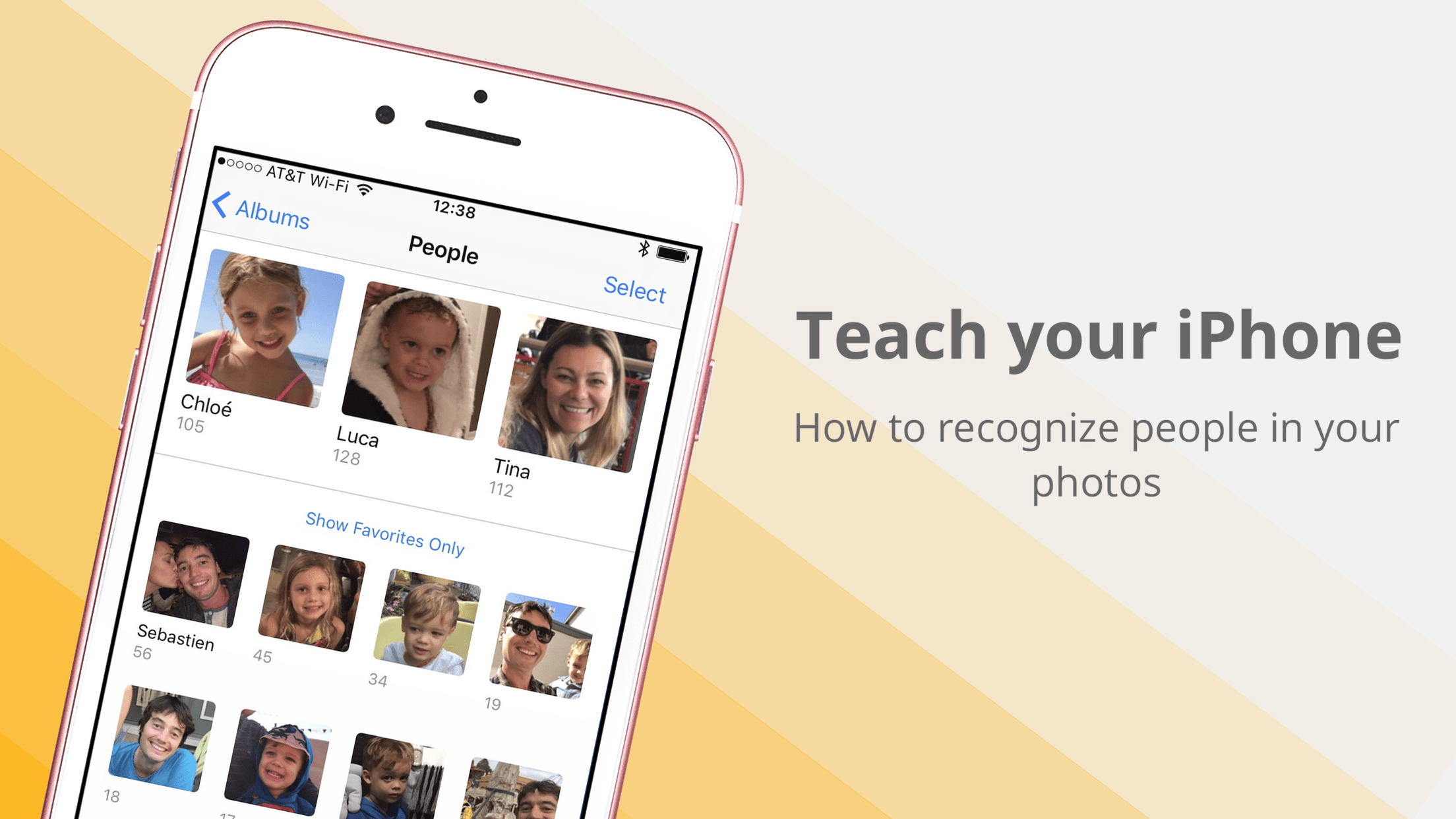 Organizing one’s photos by date or occasion is by far the most common methodology in photography, and of course why wouldn’t it be? The simple fact of the matter is that a chronological structure of photos satisfies most search requests because you pretty much know immediately where to look for a certain snapshot. With that said, more unconventional efforts such as accumulating every single photo taken by the beach or all shots of your family ever snapped, quickly render the chronologic album structure rigid and dated.

More than ever with iOS, Apple is trying to alleviate the issues outlined above by giving prominence to more forward-thinking photo organization algorithms, including improved facial recognition software to detect recurring faces in your photos. The result of which is the capacity of machine learning and smart album creation on the basis of the identified individuals. If this sounded grossly techy, let’s put it in plain language: with a little bit of your help, your iOS-powered device is capable of both learning who’s in your photos and filing away pictures old and new in one joint album for your reminiscing pleasure.

Without further ado, here’s everything you need to know about teaching your device of choice the names of the subjects in your photos. We’ll also explore how to help your iPhone identify additional photos in case auto-recognition fails, and everything else necessary for a much more intelligent way to organize your photo library in the future.

Photos has received a lot of attention in last autumn’s software refresh and as a matter of course, facial recognition is not the only new filter brought about by the new and intelligent algorithms, however it will be the only one broached in this article.

This is because for one, properly teaching your device to recognize your friends alone comes with a lot of subject matter already, and two, we already have tutorials for browsing photos by location and smart Memories. As a final precursory remark, there are two different approaches to go about teaching your device faces in photos, which we will run by you separately and it’s ultimately down to you which one you want to utilize.  So before this devolves into a full-blown preamble, let’s get into it!

If you’re not dealing with a particular photo you just took of someone, but more broadly want to begin from scratch with the teaching of faces and names of protagonists already starring in your stored pics, stick to this tutorial for now.

1) Find the People album in your Albums tab. 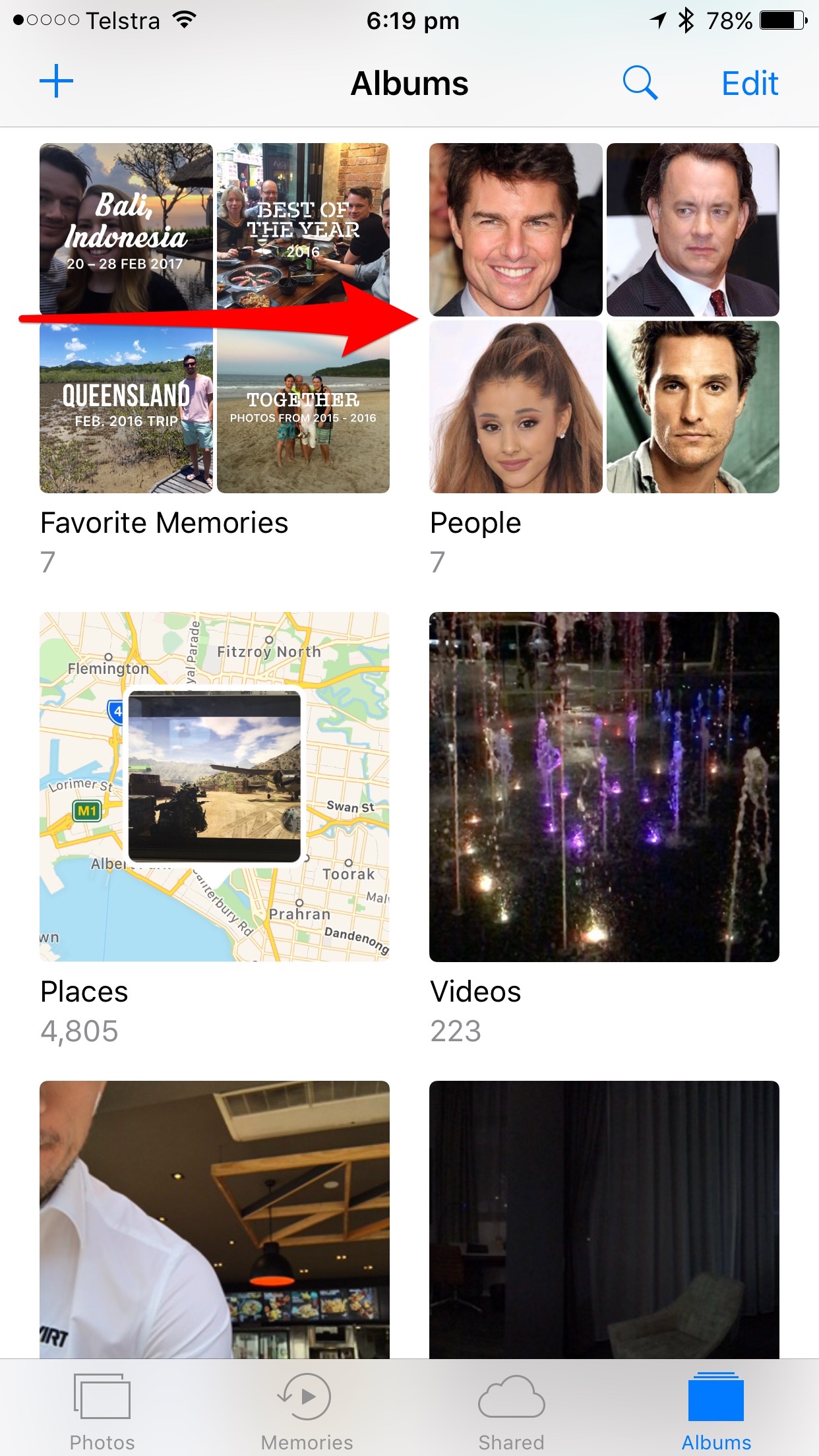 2) Take a moment to familiarize yourself with the interface: you should be looking at a whole bunch of nameless faces iOS has intelligently detected and grouped behind one cover photo of that particular person. The smaller digit under the frame indicates how many of your device’s photos have already (automatically) been linked to the identified person at the hands of the OS.

3) Let’s assume you see the mugs of multiple friends or family members in front of you, some of which are pretty comprehensively lumped together (we’re fixing photo omissions or mistakes later) and you want to start getting that person and your device acquainted. Start the learning process by touching the face of a person.

4) The subsequent view will congregate all photos on your device automatically associated with the person and offer a + Add Name text field in the center of the top bar – touch the field and type in the (nick)name of the person. Hit Done. 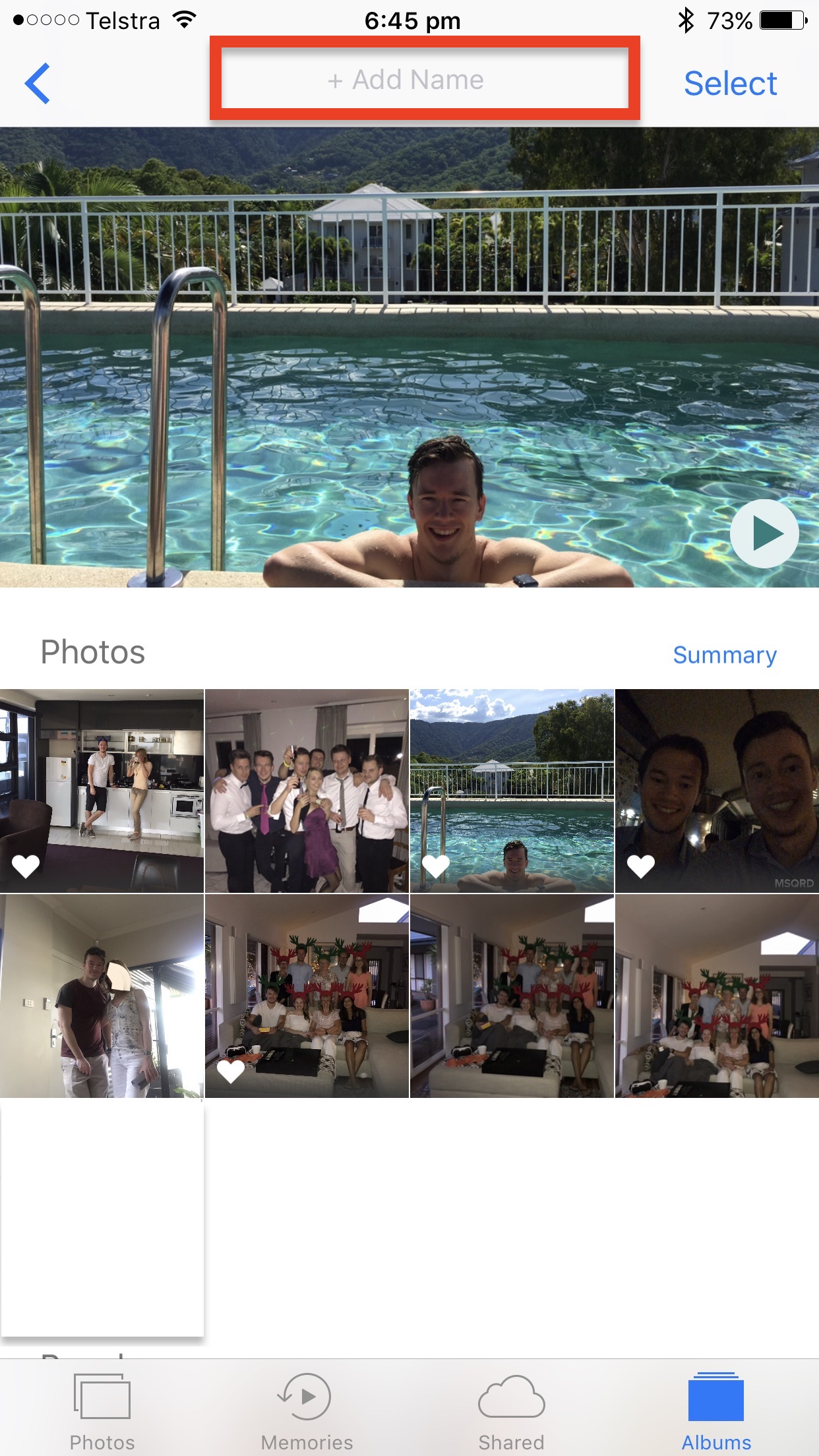 5) Now that your phone has a name to the photos, hit the return arrow in the top left corner and watch what happens next.

There you go, your iPhone now has a name associated with the face behind the thumbnail. Step one is accomplished.

Favoriting people in your smart album

Before we touch on adding photos to incomplete collections of your friends and teaching your device how to recognize their faces better in the future, a quick word on the smart album’s structure.

If you want your favorite people to be featured in a larger format, try one of the following two techniques to promote them:

1. Simply tap on the Heart icon on a person’s smart album.

2. The alternative way of tagging someone as a favorite person (this is not the same as marking a photo as a favorite photo) comes in handy chiefly when you’re not already inside the smart album ‘People’. Provided you are elsewhere in your Photos app though and stumble upon a photo of a friend you want to spontaneously promote to a favorite person, do this: 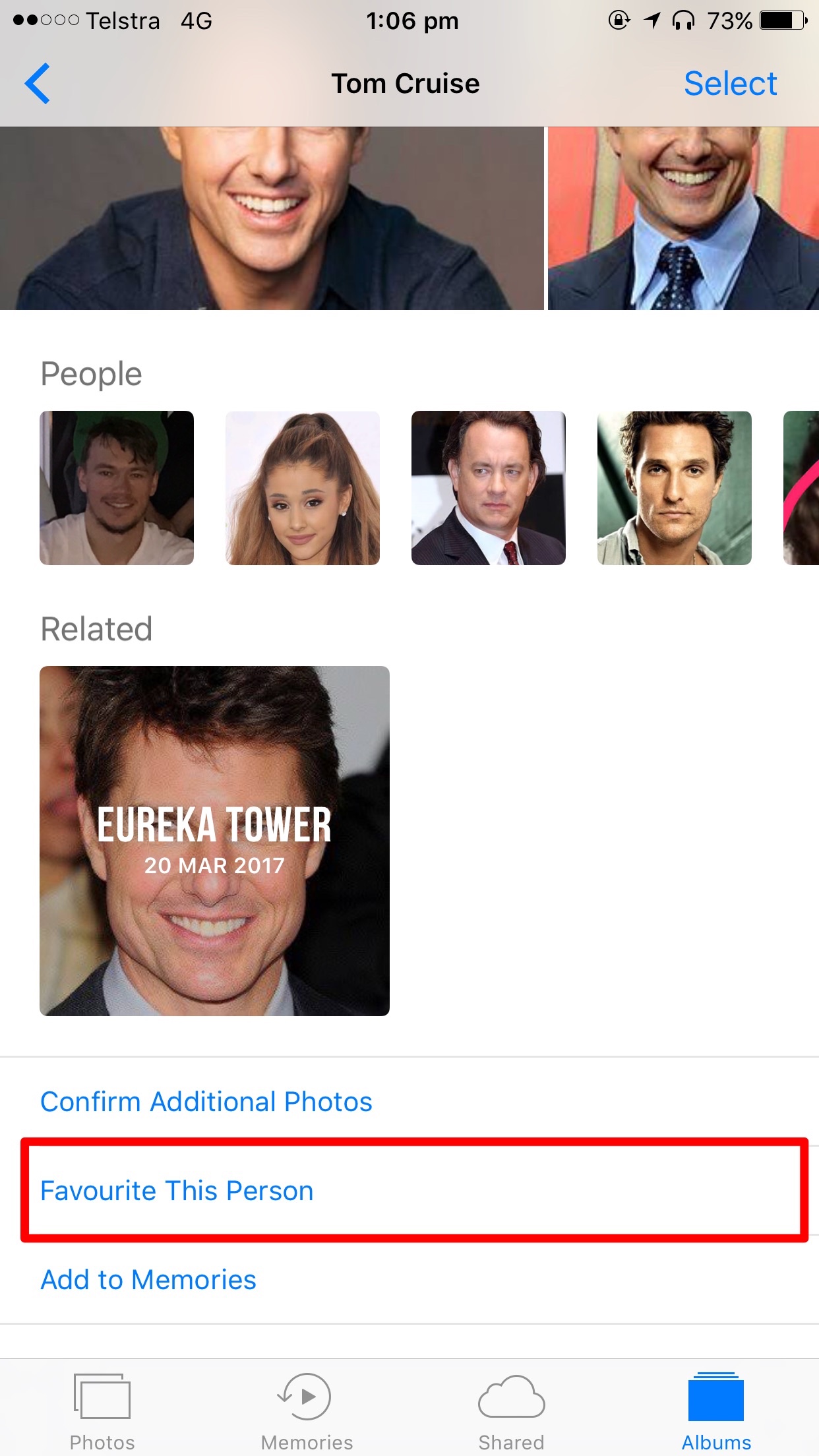 For better or worse, there’s only so much Apple’s algorithms are capable of picking up at this point. As soon as you have embraced the ‘People’ album and set yourself the task to bring order to the chaos that it used to be, chances are you will come across two apparent roadblocks eventually.

On the one hand, doubling issues can permeate your gallery of people identified, resulting in multiple stacks of photos of the same person. On the other hand, sometimes photos downright slip through the cracks of Apple’s intelligence and are not associated with the person they ought to. In this instance we can actually give the system a hand and assist it in identifying questionable photos, plus eliminate any ambiguity in the future.

Since we don’t want to jumble up these two talking points though, let’s start off with merging doubles (or triples, or any number of photo stacks of the same person).

1) Identify the cases where your iPhone or iPad has correctly amassed photos of a person behind their respective thumbnail, however failed to combine certain photo stacks (aka your device is under the wrong impression that these are different people).

2) Click the Select button in the top right corner.

3) Now mark all instances of the same person wrongly identified as another individual by tapping all the identical faces once. Kind of like playing a game of memory, right? 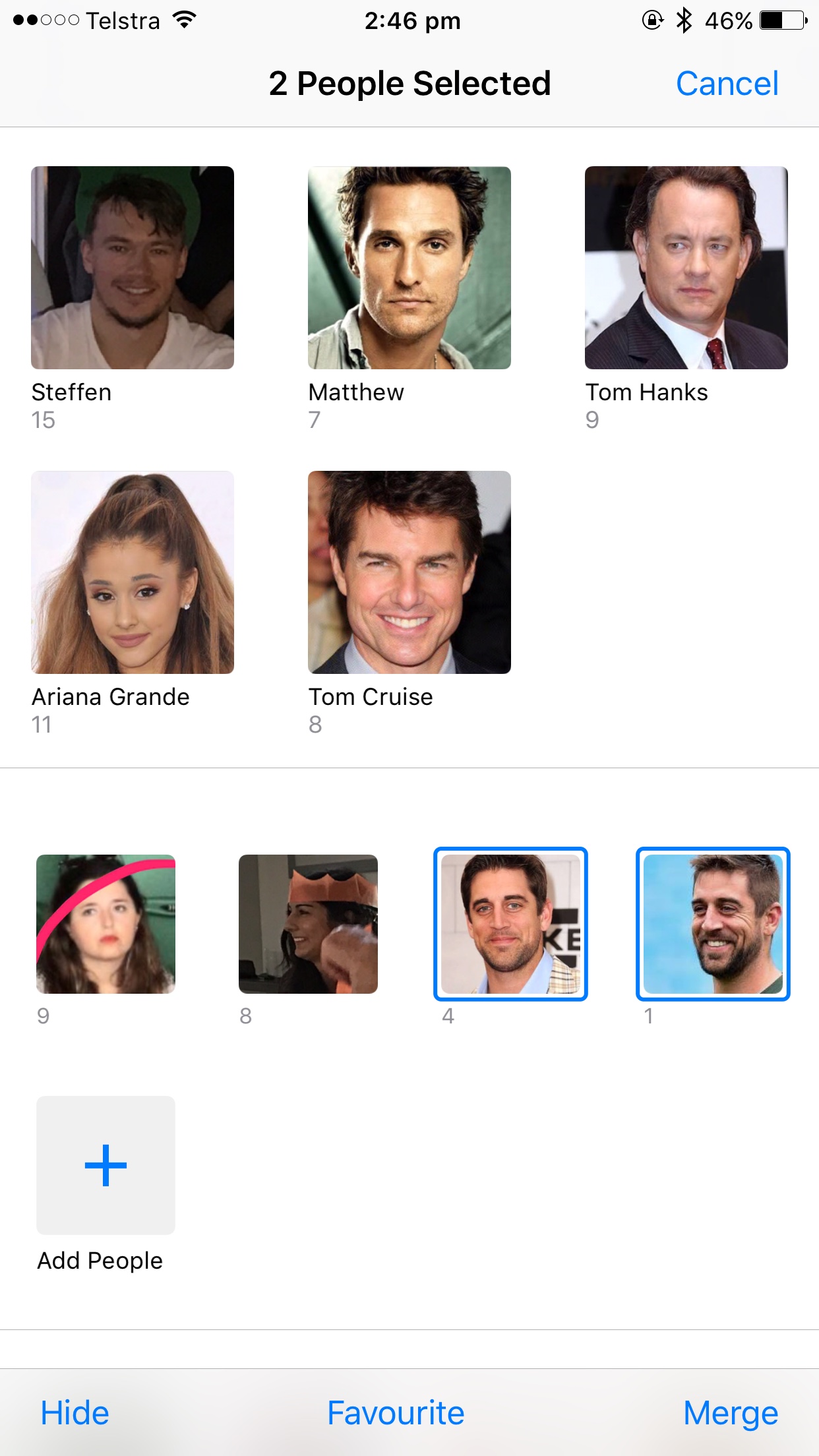 4) As soon as they’re all tagged, hit Merge in the bottom right corner, as seen in the screenshot just above this step.

5) Confirm you want to merge the respective mugs when prompted: 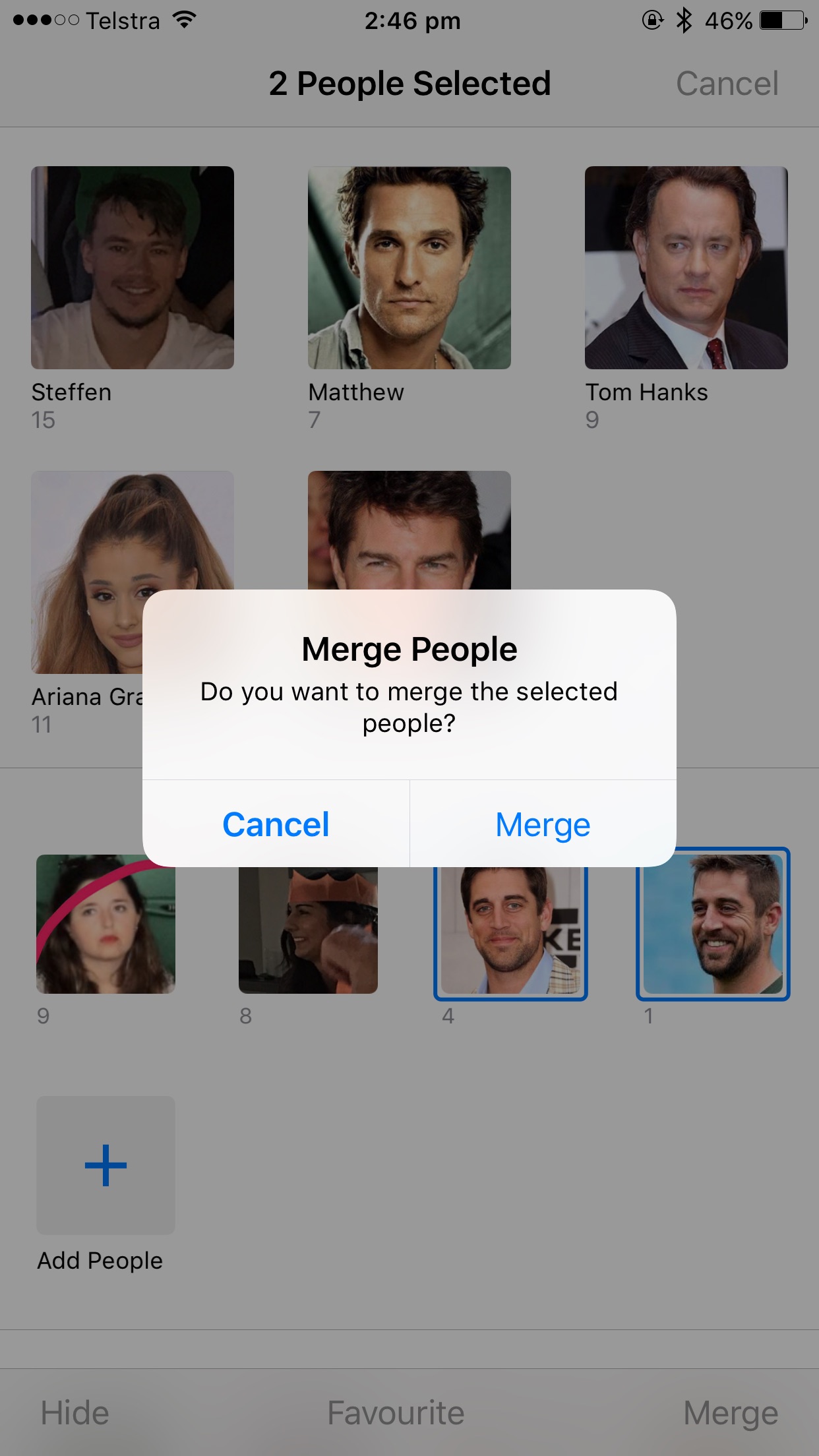 6) The merger is executed.

So you have succeeded at merging multiple entries of the same person, but there’s still that nagging feeling that iOS has failed to identify all of the photos of the person in question? Try this step next to give your device a leg up:

1) Select the person you want to manually identify more photos of. This can be a favorite of yours by now, but could also be a smaller thumbnail elsewhere. Tap the face once. By way of example, we’re going with this Canadian dude: 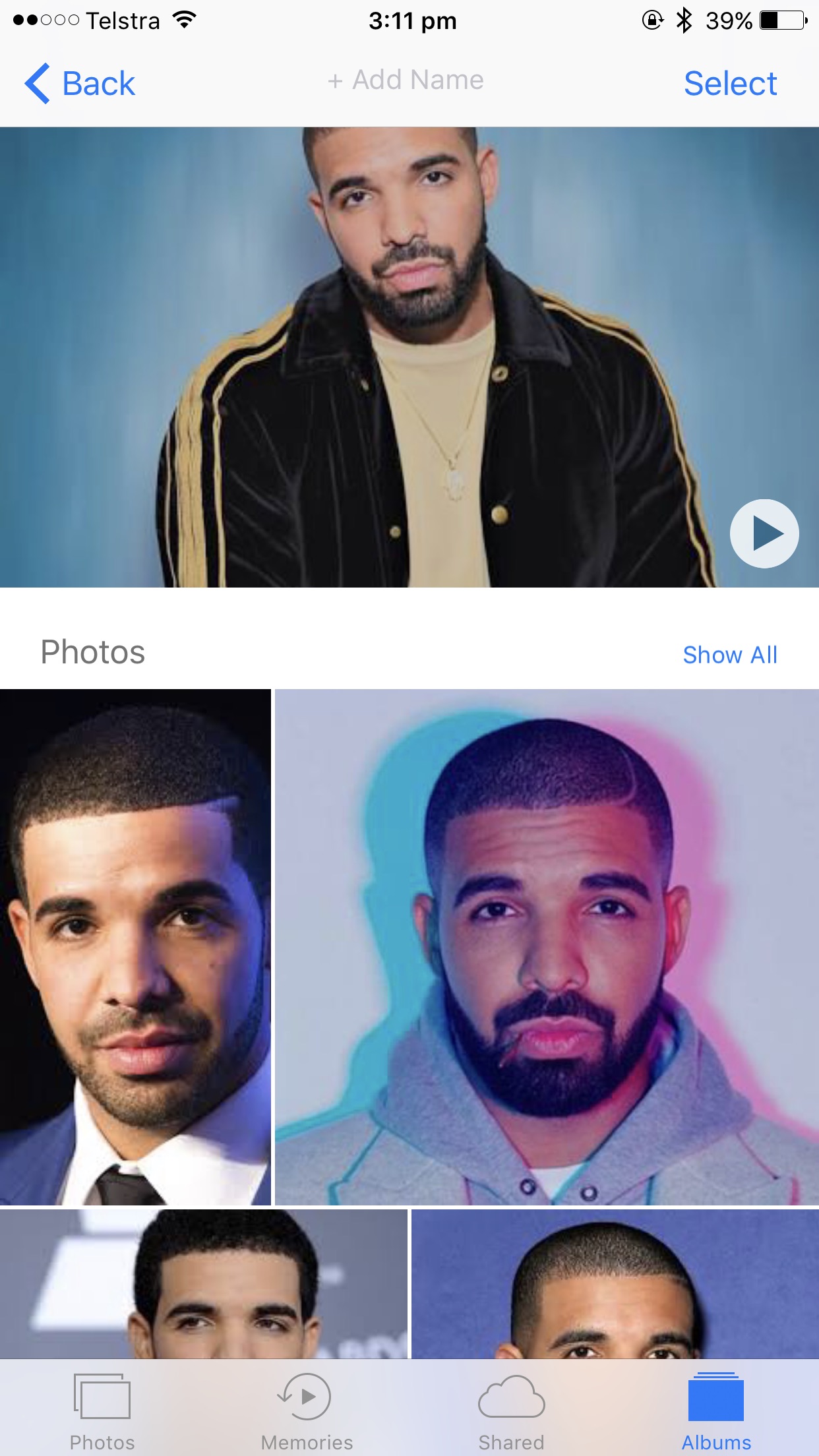 2) Scroll to the bottom of that person’s photo wall and find the text box reading Confirm Additional Photos. Confirm. 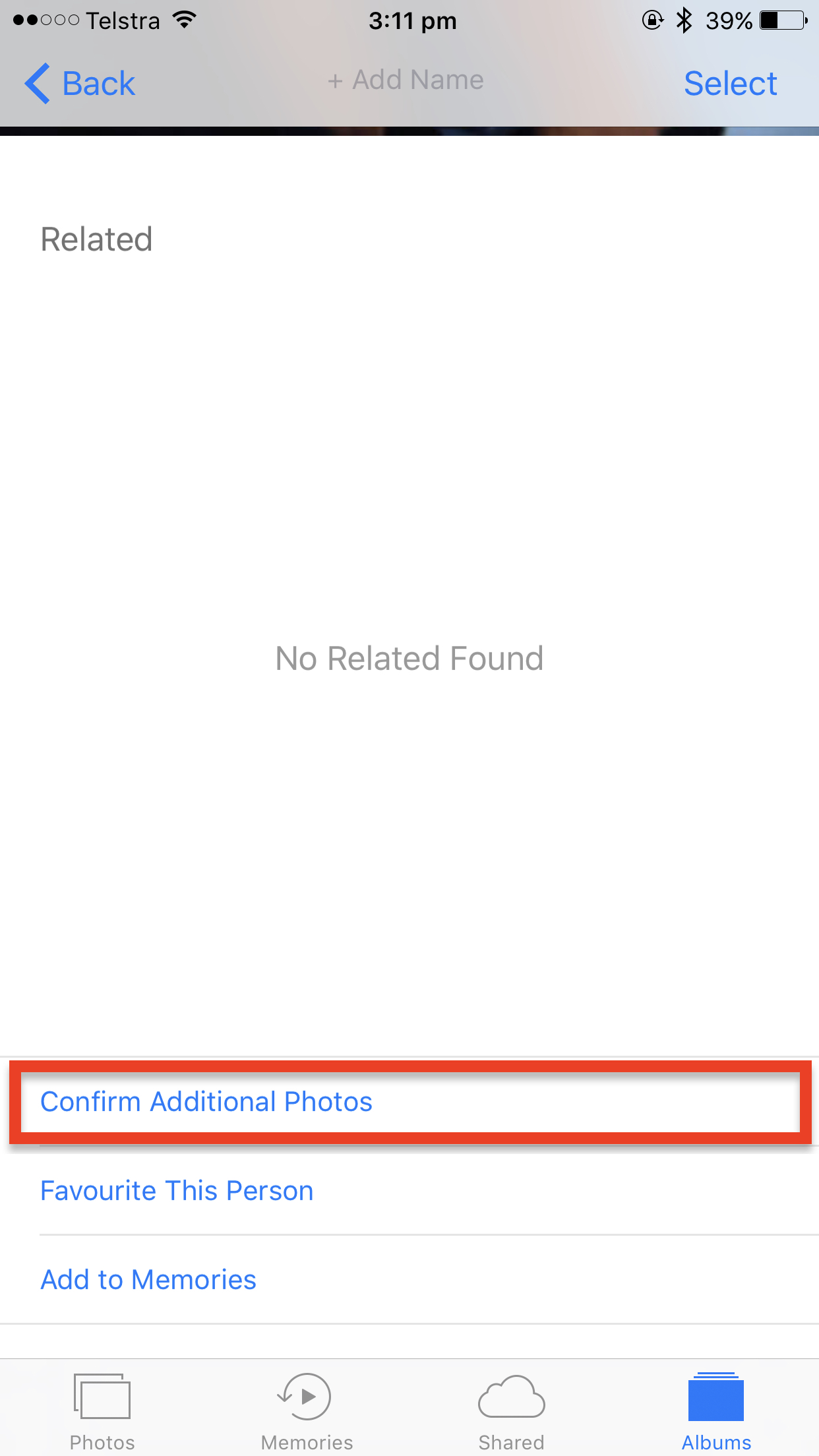 3) If your operating system has half-identified more photos of the individual, but just wasn’t confident enough to slot the pictures in where they belong, now is your time to shine. Your device is going to ask you Is this the same person? for a multitude of photos. Confirm where appropriate, deny when necessary. This step will in addition help your system identify any faces cropping up in the future more accurately. 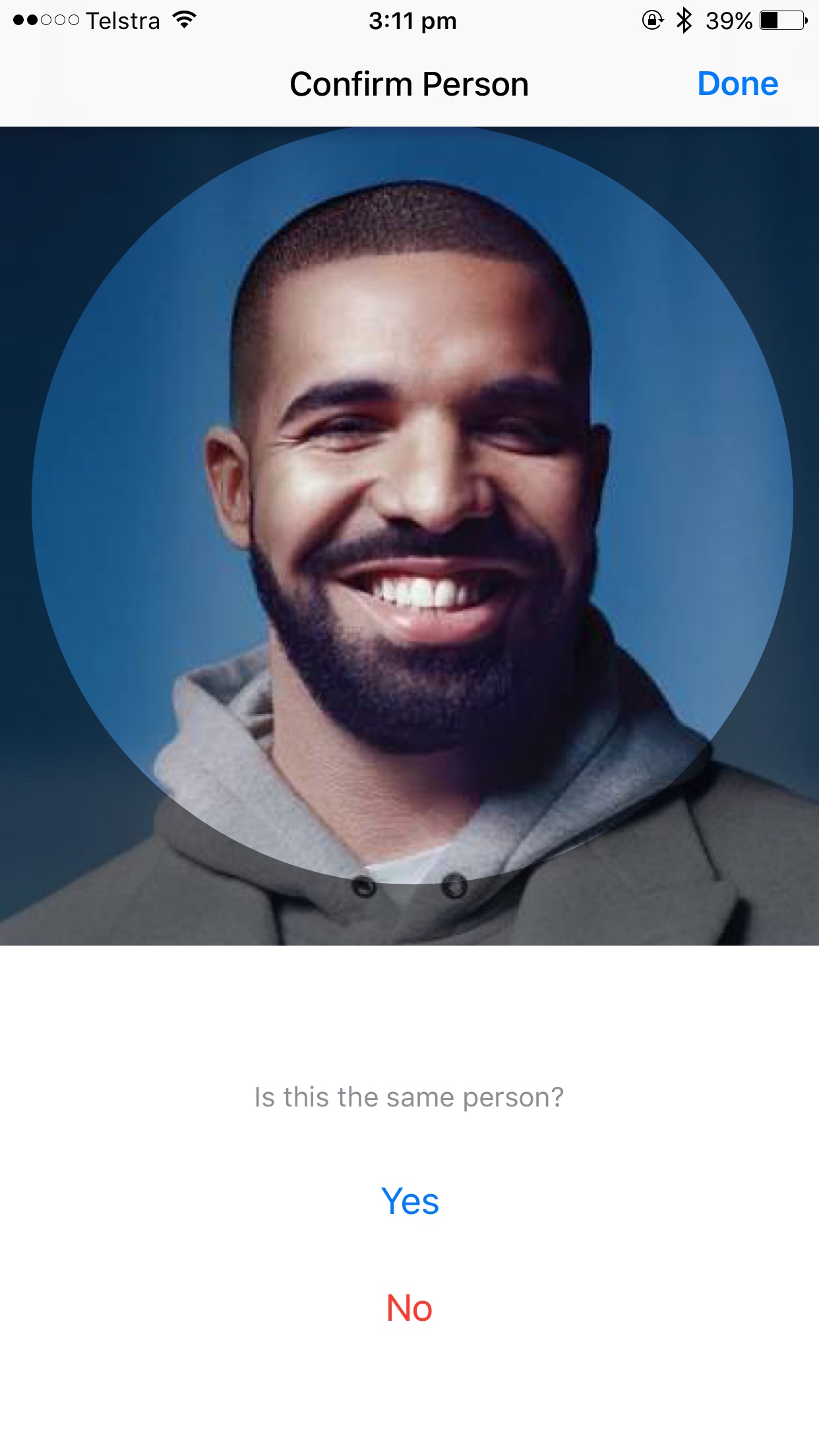 4) After completion, confirm the updated stack by touching Done. 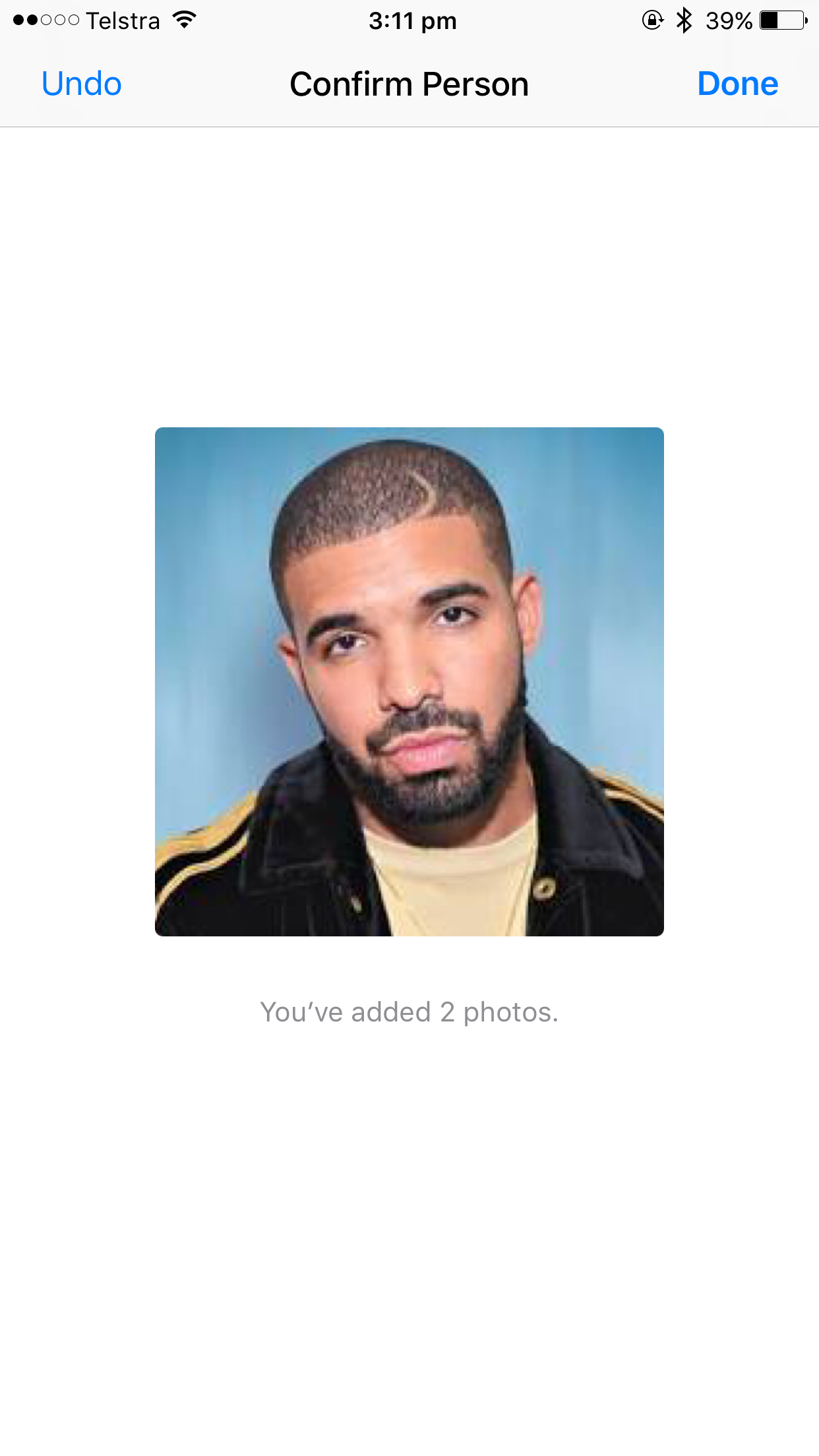 That’s it. Name and favorite the individual at your discretion.

We can almost see the finish line now! The final thing to address is the fact that you can input + name a fresh face to your smart album without actually accessing the album called ‘People’ in the first place. The methodology described below is definitely not the best way to go if you’re starting from scratch with the identification of your friends, but potentially a decent shortcut when you have done the groundwork and now want to add a single new person to the list. Take note that this is an optional path for adding people and only that, none of the subtopics discussed above (Favoriting thumbnails, merging photos, identifying people) are affected.

1) You have photographed a face novel to your device and want to instantly tell your iPhone who this is for future reference and automatic photo aggregation. Open the picture full screen in Moments or your Camera Roll, no need to switch tabs and seek out the ‘People’ Album.

2) Swipe the photo up to find the People shortcut and touch it. If it’s not showing straight after taking the shot count up to ten, sometimes iOS will require a moment to analyze the face and add it as a new entry. 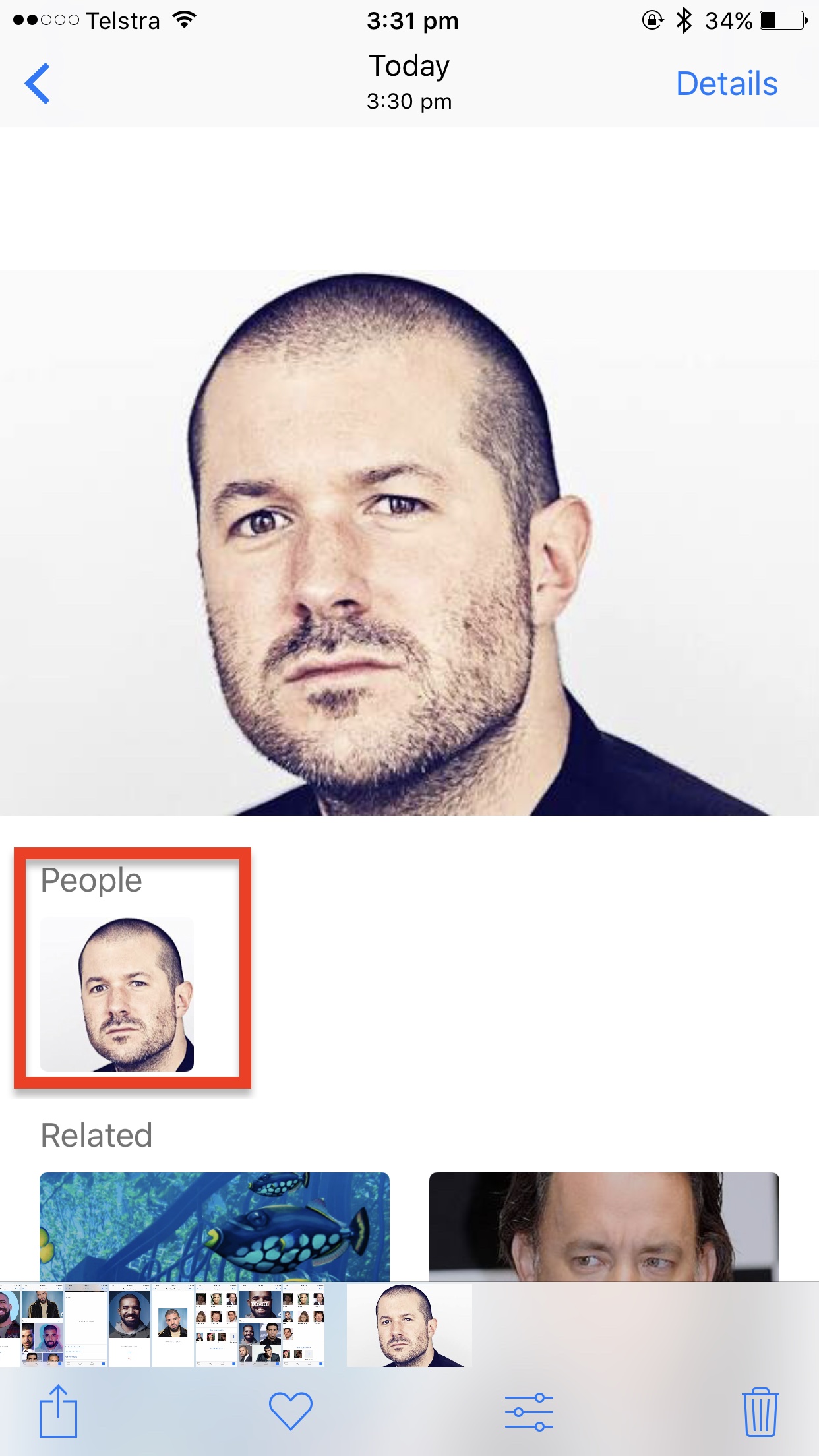 3) You know what’s next: you will be directed to the person’s (brand new) photo wall. Touch +Add Name and type in the name of the person in the photo. Confirm by hitting Done on your keyboard. 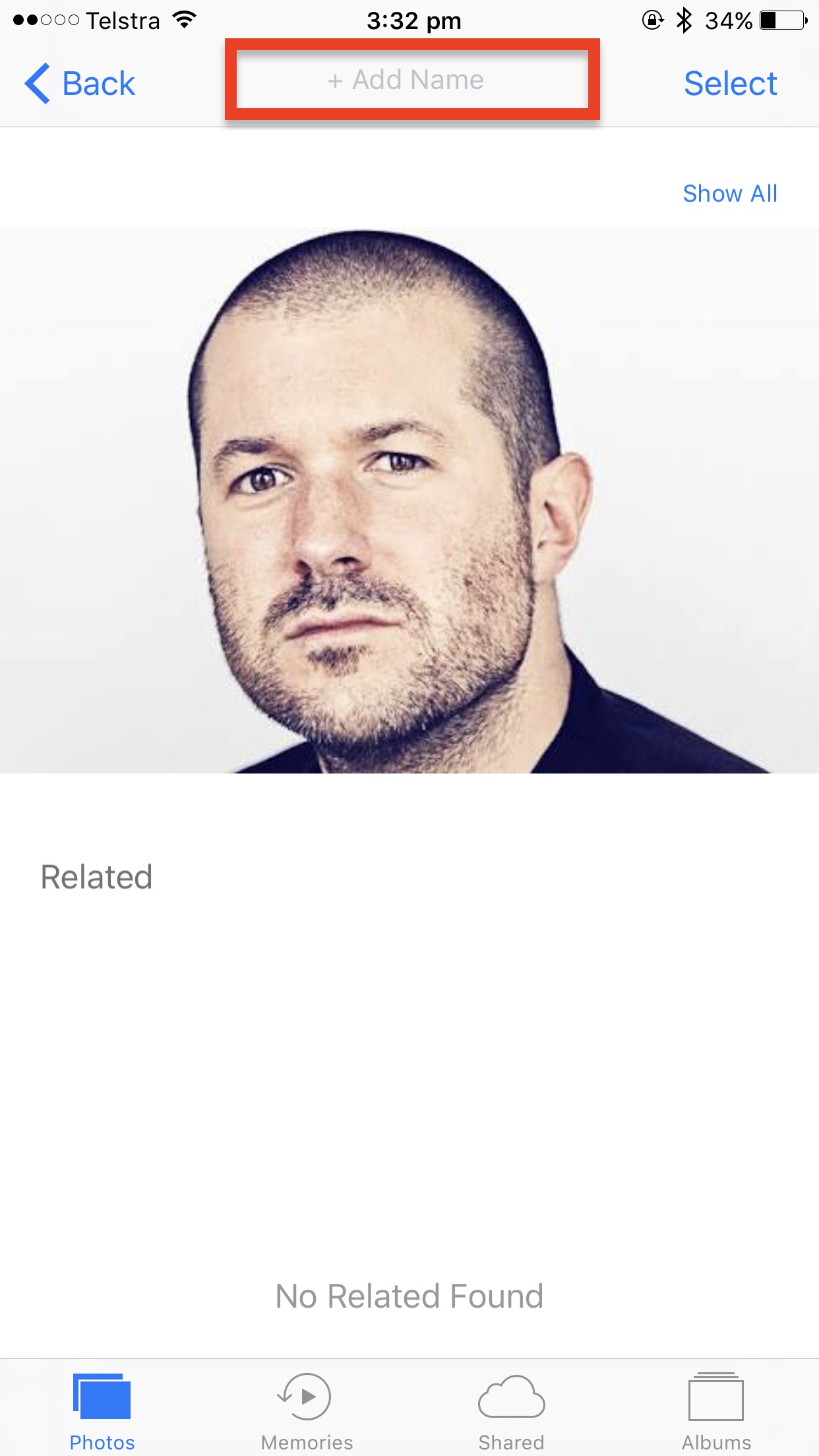 4) Once the name is registered, you’re basically done. Go back to your Photos and keep doing whatever you’re doing. Your device has successfully been introduced to the new face, as evidenced by the thumbnail and name in the smart album ‘People’.

And just like that, you’ve made it all the way through, congrats!

If you have skipped the first section of this tutorial and have questions unanswered, perhaps check out the various sub items further up in this piece. For everything else, as always make sure to use our comment section!