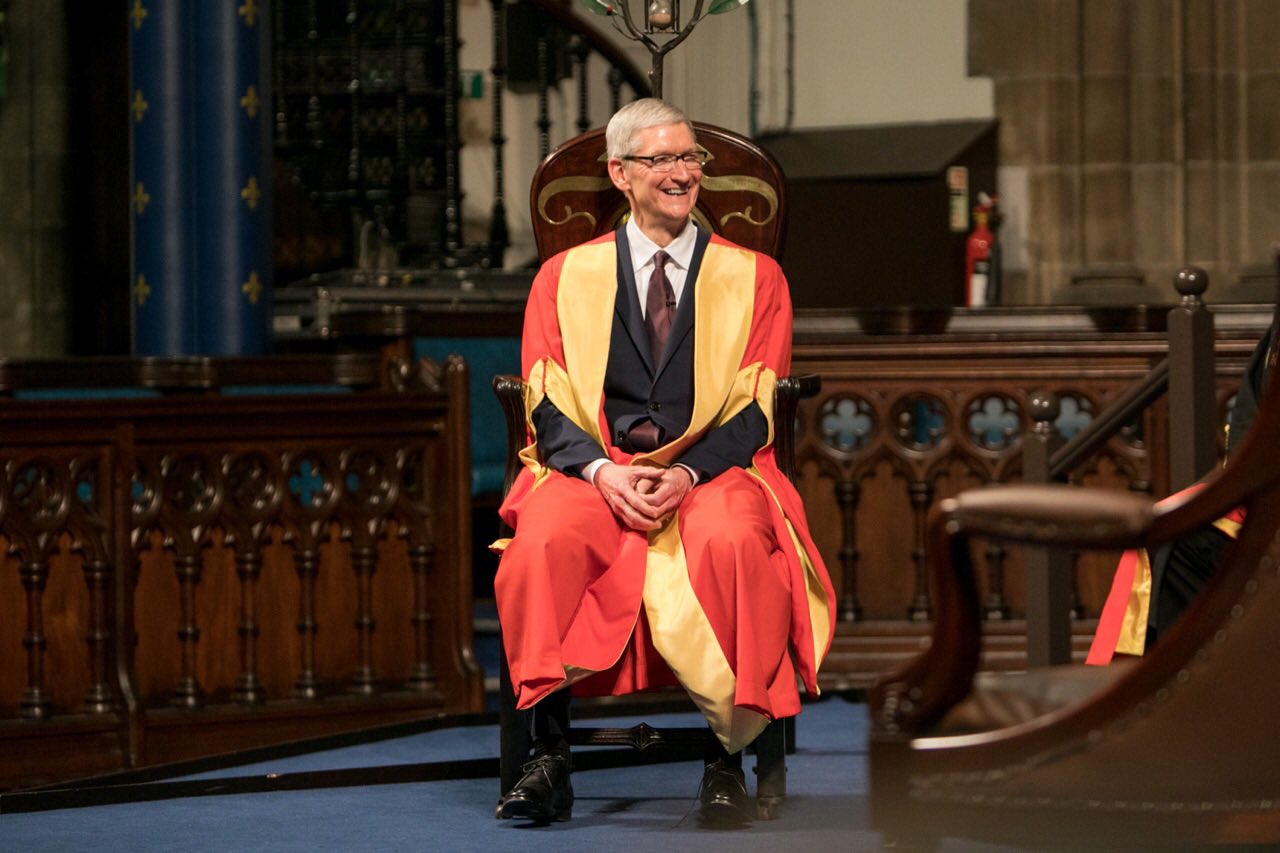 As announced last week, Apple’s chief executive Tim Cook has received an honorary degree from the University of Glasgow, in the United Kingdom. Following the official ceremony last night, Cook sat down for a fireside chat with students. Just prior to the session, he stopped at the Glasgow Apple Store and talked to customers.

The Apple CEO discussed a range of topics, including immigration, Apple Pencil, the legacy of Steve Jobs and more. A full video of Cook’s appearance at the University of Glasgow is now available for you to enjoy.

When asked whether Apple is supportive of US President Donal Trump’s travel ban, Cook reiterated thoughts shared in a recent memo to employees as well as in a letter Apple and other tech giants signed to oppose the executive order.

“We are a nation made stronger by immigrants,” he said, stating that “Apple would not exist without diversity.”

I personally believe that the wealthier countries have the responsibility to accept people that are fleeing civil war. It’s a reasonable argument for people to have about to what degree.

It’s also very reasonable for people to say that we’re not doing enough for people in our country today. And I think that’s also true. I just don’t think that it’s a trade, one for the other. I think the US can do both.

“I do not support the immigration ban,” said Cook.

“If we stand and say nothing, we become a part of it,” he added.

Another student pressed Cook on the decision to release Apple Pencil, reminding the CEO that Steve Jobs used to say that if you see a stylus, they blew it. Cook responded by explaining that Apple Pencil isn’t just a plain boring stylus like most styli used to be back when Jobs made that comment in 2007.

The truth is, Steve did hate styluses but if you’ve ever used Apple Pencil, it’s the furthest thing from a stylus that’s ever existed. I met a designer on Monday in Paris, a designer of very high-end dresses for particular customers. He designs totally on iPad Pro with Apple Pencil.

Designers historically, and many still do, carry sketchbooks. because they don’t know when they’re going to have inspiration. And when they have it, they want to have their tool there.

The designer had a box full of crayons markers pencils that he used to use and now he uses one. So, the Apple Pencil is a creative tool. That’s what it’s about. It’s not about stylus.

Here’s the full video of the ceremony and Q&A with Cook.

Commenting on the legacy of Steve Jobs and how the very values that Apple’s late co-founder instilled in employees are still deeply embedded in Apple’s DNA, he reiterated that those values will always be central to everything Apple does.

Steve’s DNA will always be the core of Apple. Steve is deeply embedded in the company. We celebrate him and we celebrate his philosophy. His philosophy will be at Apple 100 years from now. The philosophy is sort of passed down with every generation. Yes, he’s very much at Apple.

He went on to note that Jobs was a highly focused individual in private life.

Between his family, Apple and Pixar, Jobs had little time for other endeavors, explained Cook, adding Steve had the biggest influence on his own life.

He took a risk with me when I was 36 years old, and it was sort of that instance, and many instances thereafter, that I recognized that I had been on the wrong path—and that I was sort of rudderless in a way. I met a CEO for the first time that was totally focused on basically one thing: making great products.

He had a focus that was unlike any other. His thinking was so pure. He wasn’t trying to maximize his wealth or anything else. He really understood the sort of things we work on, and the results that come from those things, and he separated those two.

Following the chat and the Q&A session, Cook mingled and posed for selfies with students. 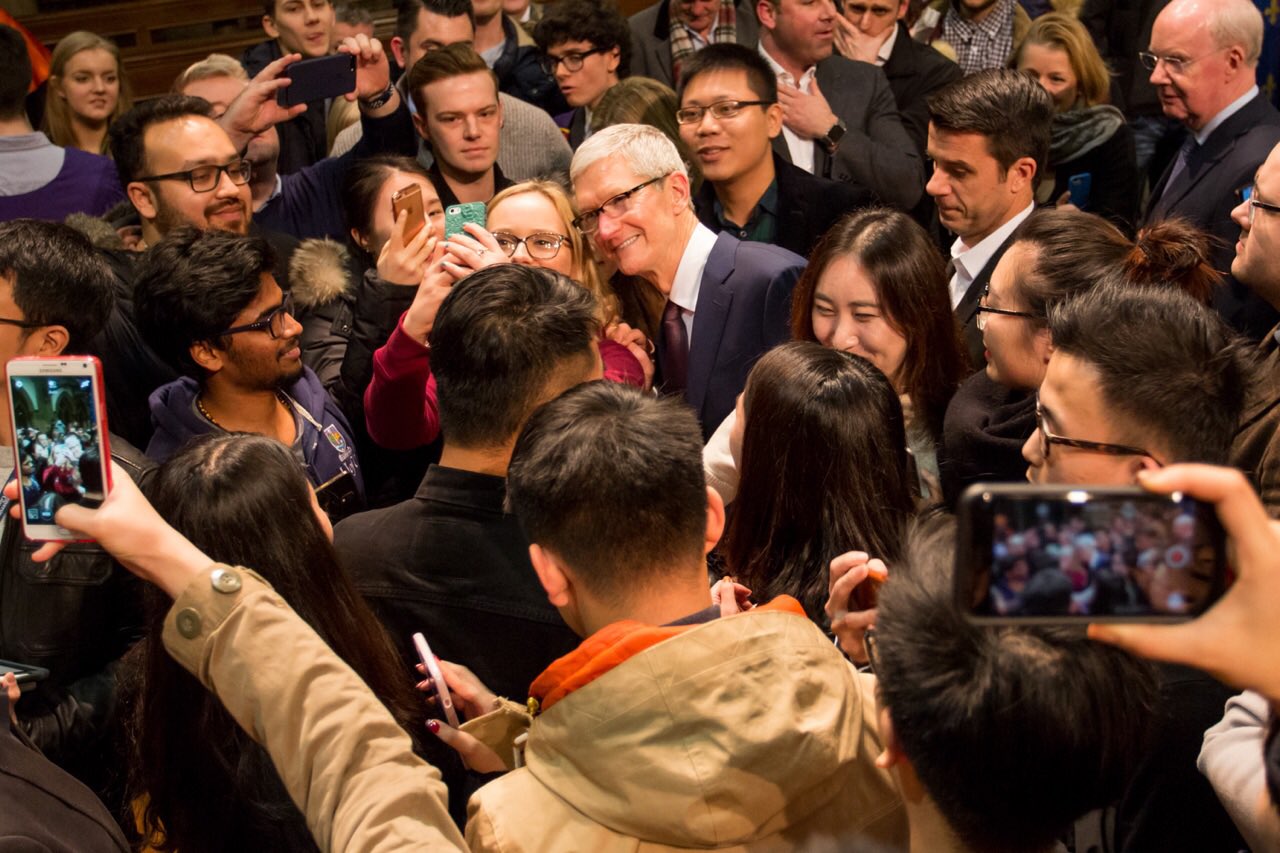 Cook said that coding should be required in schools because modern “kids will never know any other environment other than the digital one”. Responding to a trick question from a student who asked if he could work at Apple, Cook said Apple is hiring talent all the time and pointed him towards the Apple Jobs website.

Cook has been touring Germany and France in recent days.

Congratulations to Dr. Tim Cook on receiving an honorary degree!