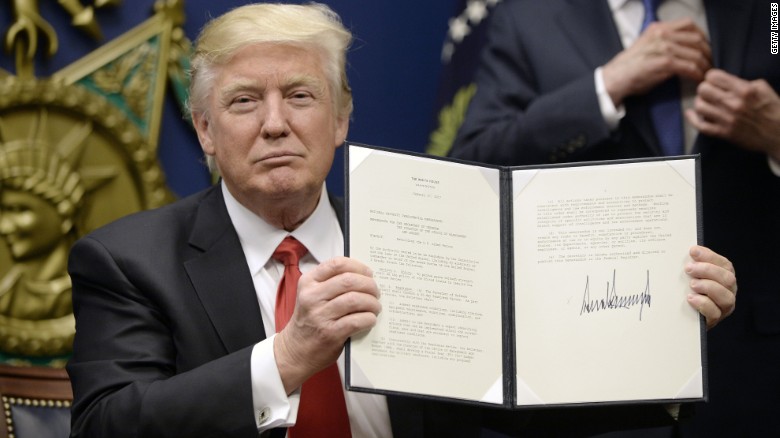 Apple, Google, Microsoft, Facebook, Uber and other technology giants, along with an unidentified consumer goods and manufacturing company, are working on a letter to formally oppose U.S. President Donald Trump’s travel ban which has barred Syrian refuges and travelers from Iran, Iraq, Libya, Somalia, Sudan, Syria and Yemen from entering the country.

Having obtained a draft of the letter, Recode reports that parties from other industries will also sign on in their support of immigration into U.S.

Bloomberg independently reports that Amazon is one of the co-authors of the letter.

The companies involved in the initiative propose an alternative screening process that could replace the current suspension of America’s refugee programs without hampering their ability to recruit top talent from around the world.

Recode shared a copy of the draft, here it is in its entirety:

Since the country’s birth, America has been the land of opportunity – welcoming newcomers and giving them the chance to build families, careers, and businesses in the United States. We are a nation made stronger by immigrants. As entrepreneurs and business leaders, our ability to grow our companies and create jobs depends on the contributions of immigrants from all backgrounds.

We share your goal of ensuring that our immigration system meets today’s security needs and keeps our country safe. We are concerned, however, that your recent executive order will affect many visa holders who work hard here in the United States and contribute to our country’s success. In a global economy, it is critical that we continue to attract the best and brightest from around the world. We welcome the changes your administration has made in recent days in how the Department of Homeland Security will implement the executive order, and we stand ready to help your administration identify other opportunities to ensure that our employees can travel with predictability and without undue delay.

Our nation’s compassion is a part of what makes it exceptional, and we are committed to helping your administration identify approaches for thorough screening without a blanket suspension of admissions under the U.S. Refugee Admissions program. While security and vetting procedures can and should always be subject to continuous evaluation and improvement, a blanket suspension is not the right approach.

Similarly, we stand ready to identify ways of helping to achieve your stated goal of bringing clarity to the future of the 750,000 Dreamers in this country under the protections of the Deferred Action for Childhood Arrivals (DACA) program in a way “that will make people happy and proud.” Removing these protections by barring renewals would effectively end the program and eliminate the ability for these Dreamers to work and live without the fear of deportation.

The business community shares your commitment to growing the American economy and expanding job creation across the country. We hire both thousands of Americans and some of the most talented people from abroad, who work together to help our companies succeed and expand our overall employment. As you contemplate changes to the nation’s complex and interconnected immigration policies, whether business and employment-based visas, refugees, or DACA, we hope that you will use us as a resource to help achieve immigration policies that both support the work of American businesses and reflect American values.

While Tim Cook initially commented on Trump’s controversial executive order in a leaked memo to employees, folks who vehemently oppose the new administration’s measures insist that Cook be more vocal in challenging the travel ban.

Indeed, just a few short days later Apple’s chief executive sat down with The Wall Street Journal to hint that Apple is looking into legal options to oppose the immigration ban in case the Trump administration continues to refuse to rescind the order.

“More than any country in the world, this country is strong because of our immigrant background and our capacity and ability as people to welcome people from all kinds of backgrounds. That’s what makes us special,” Cook told the publication on Tuesday.

“We ought to pause and really think deeply through that.”

Apple has not taken any legal steps to fight the order.