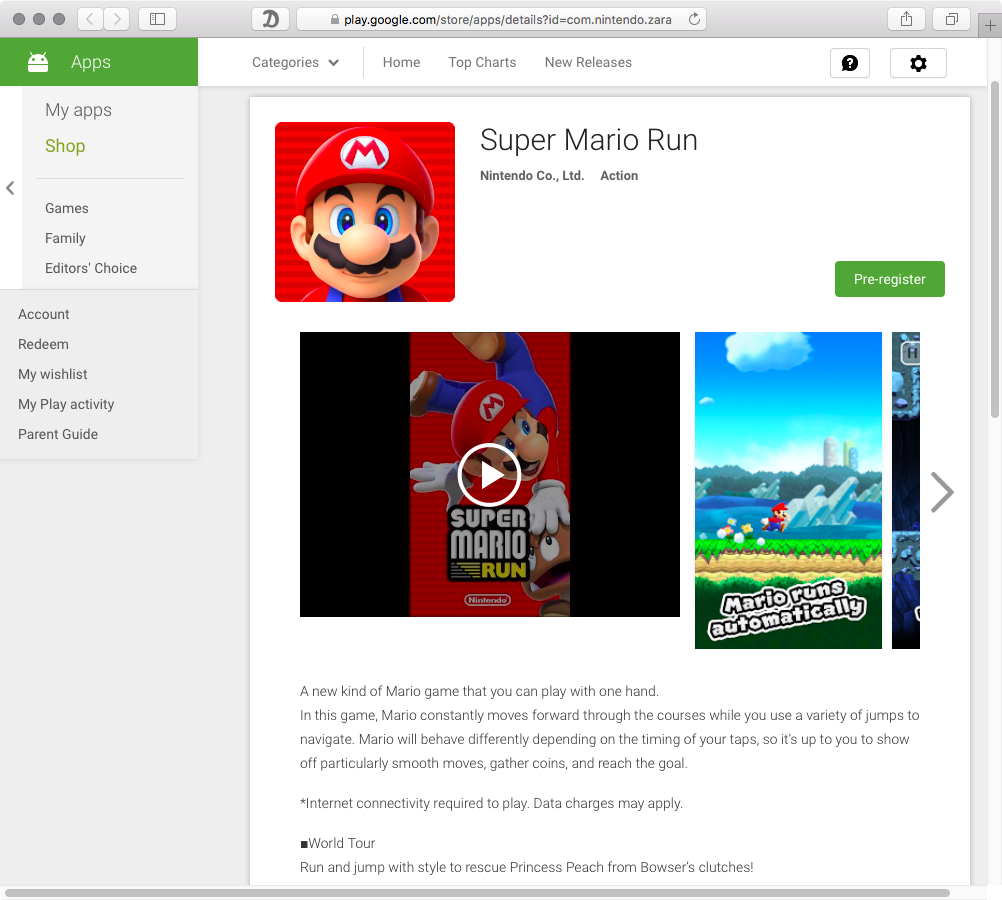 Following its December 15 debut on App Store, Nintendo’s one-handed side-scrolling platformer Super Mario Run will be coming to Android sooner than later: you can now pre-register on Google’s Play Store to be alerted when the game is available to download.

Super Mario Run is free to download on iPhone, with a $9.99 In-App Purchase required to unlock the 24 levels across six worlds.

To register your interest, visit the game’s Play Store listing and hit the green Pre-Register button. Google will use your registered email address on file to shoot a notification to your Android device when the game is released.

You can unregister by clicking the Unregister button. This seems to be part of Nintendo’s broader launch strategy for Super Mario Run as the game’s App Store listing in the run-up to launch had a Notify Me button, a first for App Store.

For those wondering: yes, Super Mario Run for Android will require a persistent Internet connection like on iOS in order to prevent piracy, according to the game’s Play Store listing. On iOS, Super Mario Run has racked up over 50 million downloads thus far.

The Android edition of the game is very likely going to use the same pricing model like Super Mario Run for iPhone because the Play Store listing acknowledges that access to all six worlds is subject to purchase.

For what it’s worth, Nintendo recently ran a survey asking a small number of Super Mario Run players how much they’d be willing to pay for the full game, so there’s that.

“You will be able to download and enjoy a portion of Super Mario Run for free and can also enjoy all of the game content available after paying a set purchase price,” reads the listing. Pricing information will be revealed at a later stage.

Unlike its iOS counterpart, Super Mario Run for Android will permit Nintendo’s third-party partners to collect data from the app for analytical purposes.

We’ll make sure to keep you in the loop regarding Mario updates and will ping you as soon as the game launches on Android smartphones.