Filling all three activity rings at the close of day has become a proper ritual and incentive for many Apple Watch owners. Out of the three, the one most likely to botch your hard-earned, months long streak is going to be the blue circle gauging standing times per day. The reasons for it are manyfold, but it often comes down to the simple fact that you cannot pencil in a time slot before or after work to quickly fill up the blue one, as it is contrived to be an achievement realized over the course of 12 hours per day.

Standland, an app for iPhone and Apple Watch users, has identified that pitfall of Apple’s activity tracker and plays on it nicely, offering more control, analytics and motivation to get users standing up at least once per hour. Japan’s iPhone App of the Year 2016 achieves this by serving up a creative blend of pet collection (resemblant of the old tamagotchi days) and fitness curation. Standland can track your standing hours right from your wrist or the inside of your pocket (for iPhone-only users) and has recently been updated for the festive season that is upon us. Follow our review below to find out about the role of in-app purchases and whether or not the stripped-down version of Standland is worth your time.

Stand up for your health… and new pocket pets

Standland is by no means an app of great complexity. Quite the contrary, the appeal lies in collecting admittedly endearing pets (now including a Santa blob) by means of racking up what the app likes to call ’stands’. Similarly to Apple’s standing hours, the watch app registers and counts a minute-long motion as one successful stand. Unlike Apple’s tracking however, it does also offer an alternative currency equalling a stand, namely taking more than 80 steps per hour. This feature is a thoughtful addition for non-watch users and not set by default for anyone rocking both devices. Before we look at the hideously unattractive starting character and the quintessential tracking capabilities, here are some of the pets you will be working (or better standing) towards. 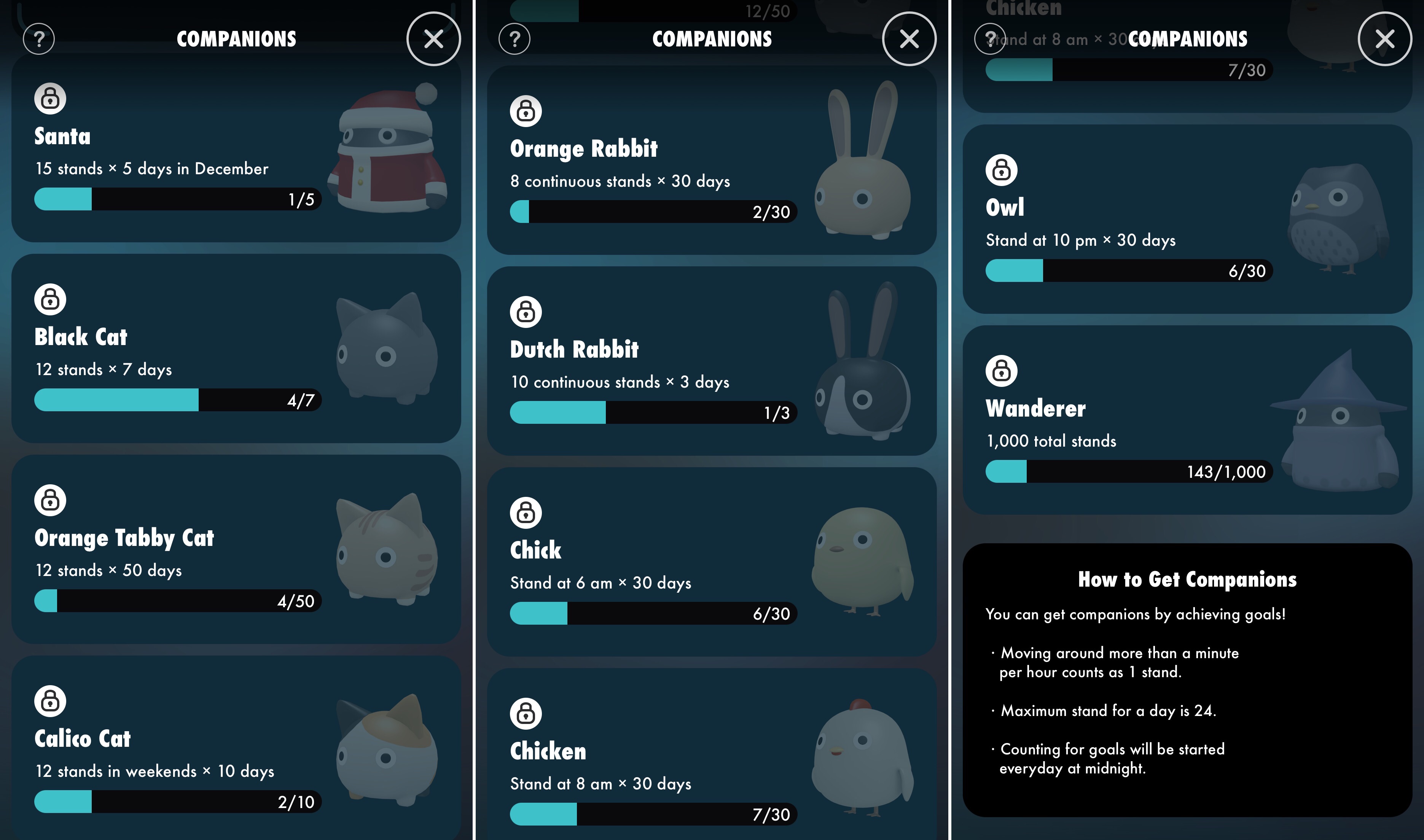 Laudably, none of these pudgy companions are cordoned off behind in-app purchases and unlocking them in most cases is only a matter of time. I for one plan to make sure I am up standing at 10PM for the next 24 straight days, because that is owl I need (please forgive me).

For now though, I need to make do with what Standland pragmatically calls Little Monster and Blue Monster. Your monster (or pet if you’re more achieved) is going to be animated nicely on your watch as well, which is capable of running completely untethered and independent from your iPhone. Animations include snoozing and waking, which are of course squared with your own movements. If you want to check out the rear side of your pet, just twist the crown on your watch to pan the camera up to 360 degrees. Unfortunately, as too often with Apple Watch, the wrist-version is barren of some pivotal features only available on iPhone: 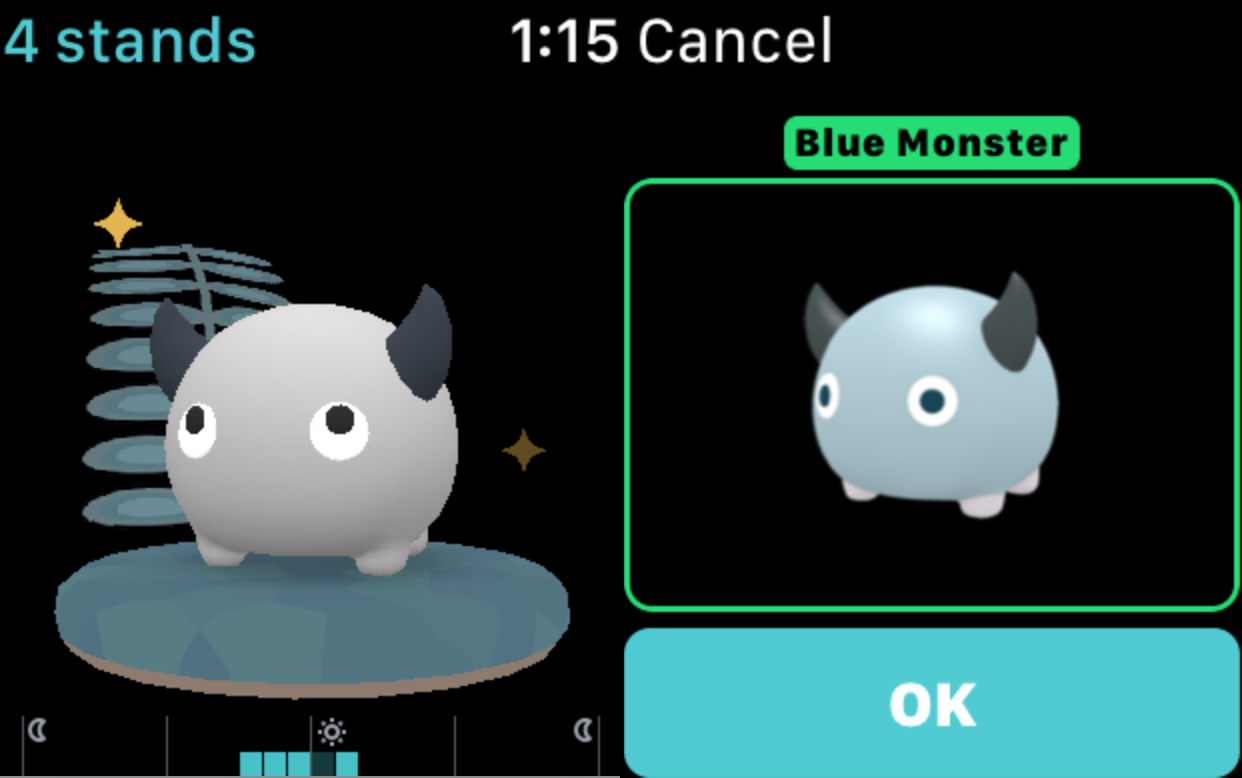 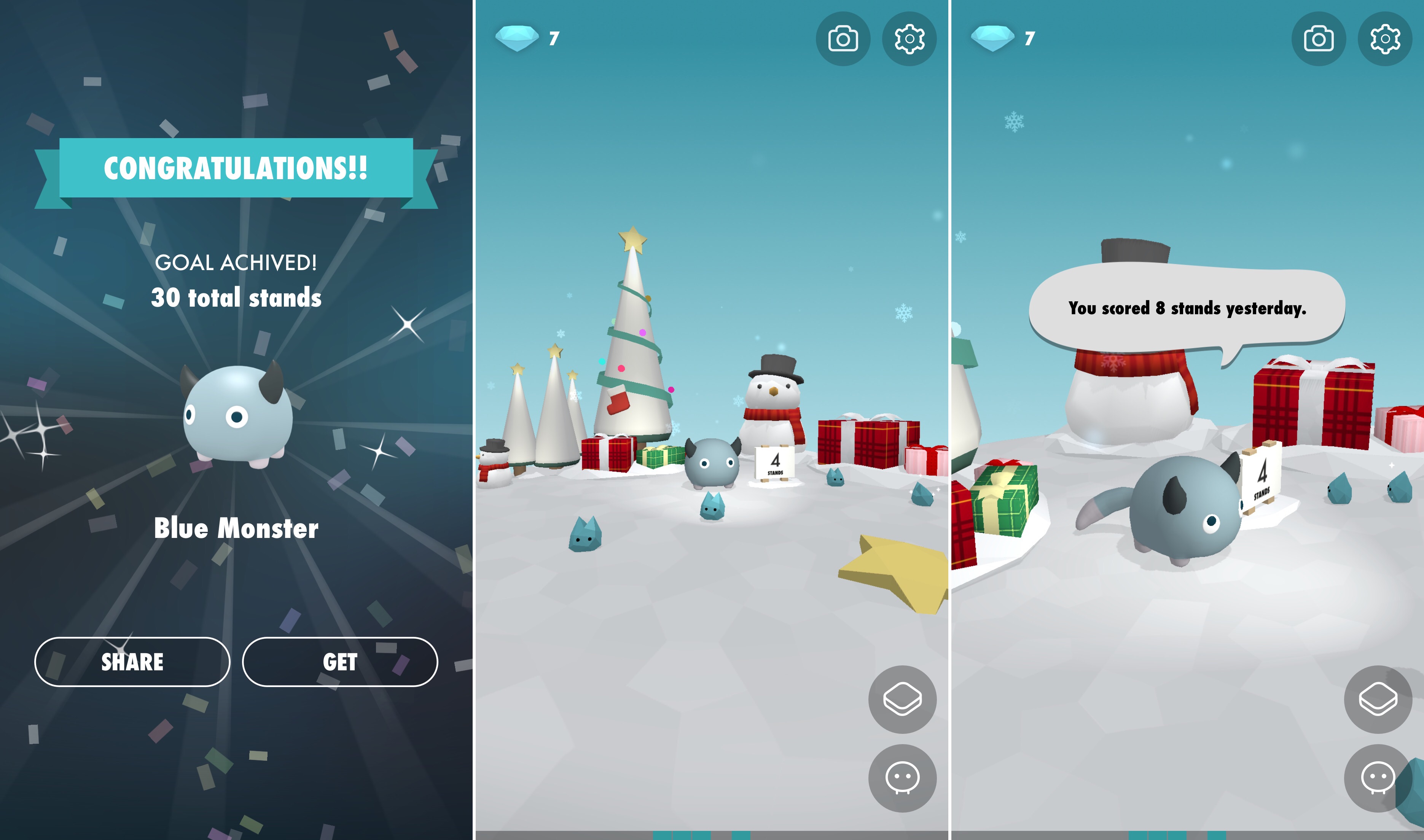 Whilst parked on a stale island on watch, your pet’s enclosure can be altered significantly on iPhone. This is (partly) where in-app purchases come into play, with Standland offering a range of environments either for a couple of real-life dollars or some 500 in-game gems. The latter can be arduously harvested by tapping your pet’s miniature friends once a day. Since Christmas 2016 and also 2017 will be over long before you have piled up 500 of those, this and the stats section are the app-makers most obvious attempts to make a living for themselves. Speaking of the statistics…

Punchy analytics, but you don’t know the half of it

Let’s get to the bottom of it. Standland is another activity tracker in cute disguise, so what are the insights we get and more importantly what is the visual presentation like?

The Apple Watch and iPhone app have one thing in common, which is an inconspicuous, slender bar at the bottom of the screen signifying your motions over the course of a 24-hour cycle. Revert back to the screenshots in case you missed it, one blue block represents a stand accomplished in that hour. As far as the Watch app goes, this is just about satisfactorily for information at a glance, but sadly also where it ends. For more (and better) data, pop up the iPhone app to find a 10-day graph or weekly and monthly breakdowns of your movements. The free analytics are concise and informative, totalling and comparing standing numbers to previous time intervals. Full reports can be unlocked for a fee of $1.99, promising the other half of it including more graphics and the nitty gritty. 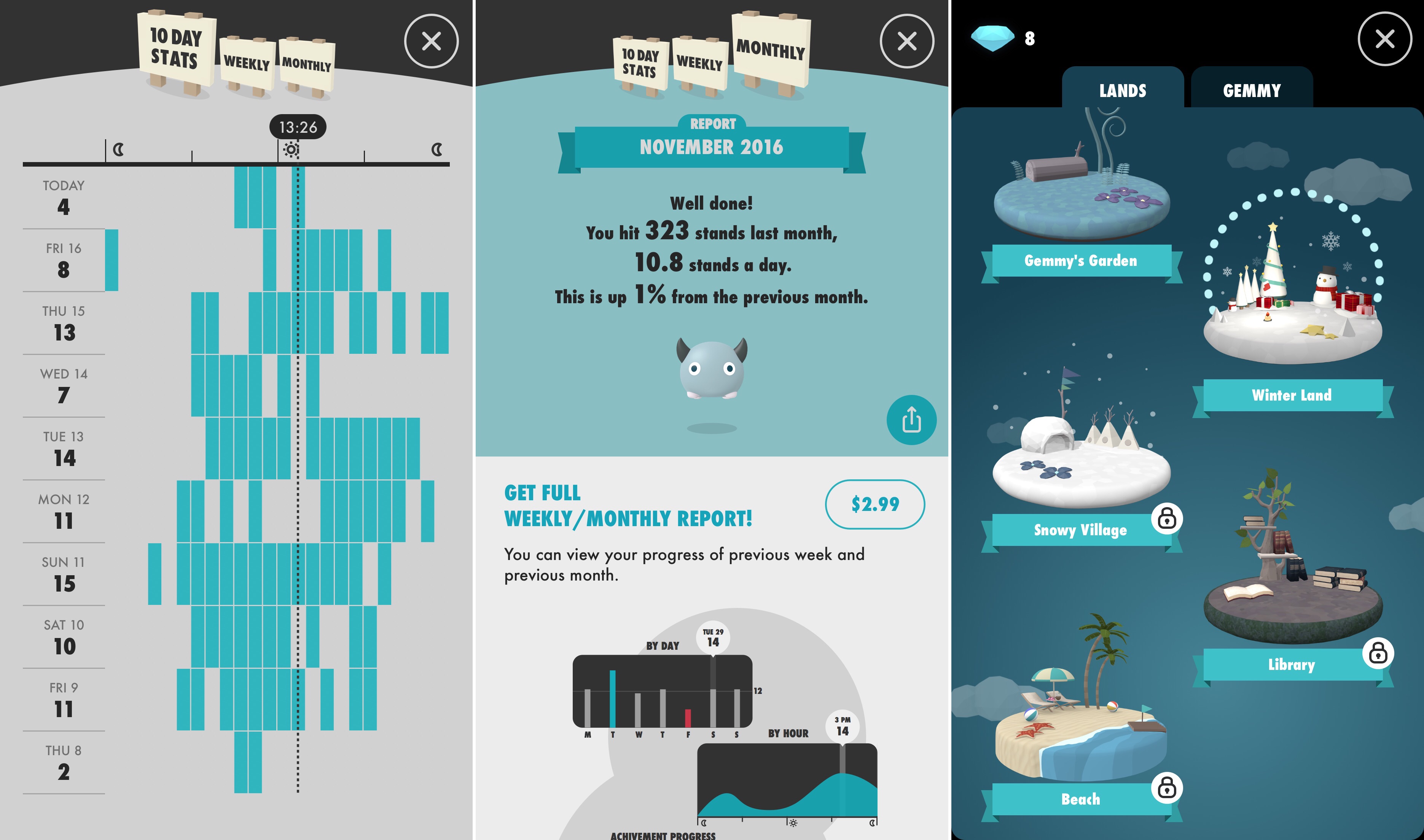 On request (tap), your pet is also likely to share some wisdom with you, which is another feature I miss sorely on Apple Watch. The omission is a shame because it seems like a low-hanging fruit: easy to implement, adding information value and a simple gesture to pull off on the go.

Overall, Standland is a lovingly designed app that perhaps suffers most from the developers’ impotence to manage the balancing act between iPhone and Apple Watch app. Activity trackers (or tamagotchi-like pets) are arguably tailor-made for a device like Apple Watch. Accordingly, it seems inconsequential to stuff all these features into the iPhone app and even exclude the more playful features on the watch. Standland ambitiously sets out to occupy both spaces, but so far fails to allocate its resources on the money. Despite that the app works and looks well enough, and if you’re intrigued by the thought of a snoozing pet on your wrist, why not give it a try? ‘Tis the season to be active.

Standland is compatible with iPhone, iPod touch, Apple Watch and requires iOS 9.0 and watchOS 3 or later. Find Standland now for free in the App Store.