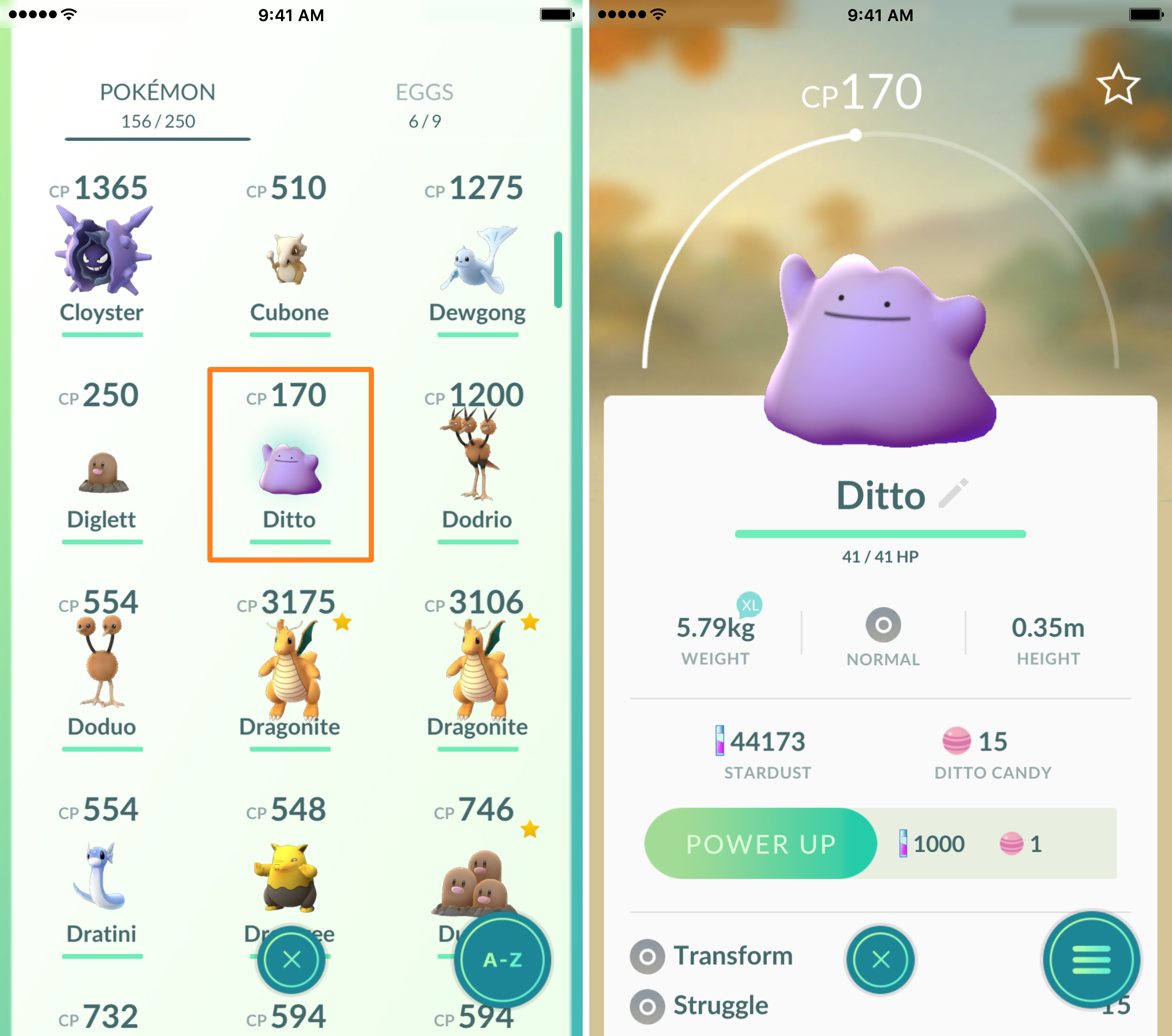 Ditto was released in a server-side Pokémon GO update last week, and while many players have already caught the shape-shifting purple Pokémon, others are still having trouble trying to bag it for their Pokédex collection.

In this piece, we’ll talk about everything you’ll need to know about catching and using Ditto in Pokémon GO.

First of all, Ditto is a shape-shifting Pokémon, so leave it to Niantic to make things difficult. You won’t see Ditto just lingering about in the wild, and this means you won’t see it on your Nearby Pokémon finder or your map.

Instead, Niantic went into sneaky mode by hiding Ditto in the masses of those unpopular common Pokémon no one really cares about. Those include:

You can increase your odds of catching a Ditto by simply catching as many of these common Pokémon as possible. Although it might mean filling up your Pokémon box relatively quickly, it also means you’ll have the greatest odds of finding the Pokémon you’re after.

Additionally, if someone else announces that they’ve caught Ditto by capturing a nearby Pokémon, you ought to find out what they captured. It turns out that Ditto spawns are not unique to specific players, so if you capture that same Pokémon they caught, you should obtain a Ditto too.

You should also think about utilizing incense and Pokéstop lures to bring out all the common Pokémon faster. This increases the chance that a hidden Ditto will spawn near you, rather than trying to seek them out yourself. Keep your Pokéballs stocked up too, this way you never miss out on an opportunity to catch a Pokémon that could be a Ditto in the making.

A final word of advice we can give you is urban areas tend to spawn more likely candidates for Ditto than rural areas do simply because of the volume of Pokémon that spawn in more densely-populated areas. Consider traveling somewhere more urban for the day if you’re planning to play Pokémon GO for a while, as this will increase your catching odds.

How will you know if you’ve caught Ditto?

You will see a short cut scene of Ditto being caught after the catch is successful. The Pokéball you caught the Pokémon in will say “Oh?” just before the Pokémon transforms into the purple blob we know as Ditto. It looks something like this:

I have Ditto already but I don’t remember catching it

In some cases, while walking around, players might throw a ball and then look up to watch where they’re going. If you fall under this category, then you may have caught Ditto already without even noticing because you would have missed the Ditto cut scene while you were looking elsewhere besides your phone.

If you’re unsure if you’ve caught Ditto already, you can always check your Pokémon box by sorting the list via alphabetical order.

Ditto isn’t necessarily a strong Pokémon, so before you start battling gyms with it, you probably want to power it up until it’s good and strong. Once you have it, there are some things you need to know.

Ditto only has two attacks. The first is Struggle, and the second is Transform. The Transform attack is useful when battling gyms because it allows you to mimic the Pokémon you’re battling.

When you transform your Ditto into another Pokémon, it will still be weaker than the Pokémon you’re battling, and this is something you need to keep in mind.

The combat power of your ditto depends on the Ditto itself, as well as the Pokémon you’re battling, but more often than not, it gets a higher combat power than Ditto had to begin with.

Once Ditto transforms, it will learn attacks from the opposing Pokémon, which means you can utilize useful attacks instead of Struggle or Transform. It doesn’t always copy the exact same attacks as your opponent, but it only learns attacks the copied Pokémon is capable of using, so keep this in mind as well.

Because the Transform attack takes a little bit to complete, you might have sustained significant damage from the battle by the time the transformation is complete, so in almost any case, you have the disadvantage when battling with Ditto in a gym.

For some, this is a thrill that will be fun to use when battling Pokémon you don’t have because it gives you the chance to use that Pokémon from your own point of view, but because it’s weaker, don’t expect it to win all the battles for you.

If you happen to come across a Ditto in a gym, that player’s Ditto will mimic any Pokémon you throw at it. Because the Ditto will remain in that form until the battle is over, it will not be able to copy any other of your Pokémon.

On the other hand, because it’s going to be weaker than your own Pokémon, you should be able to take out the opposing Ditto pretty easily.

So, that leads us to the final question: what happens if you pit your Ditto up against another Ditto in a gym? 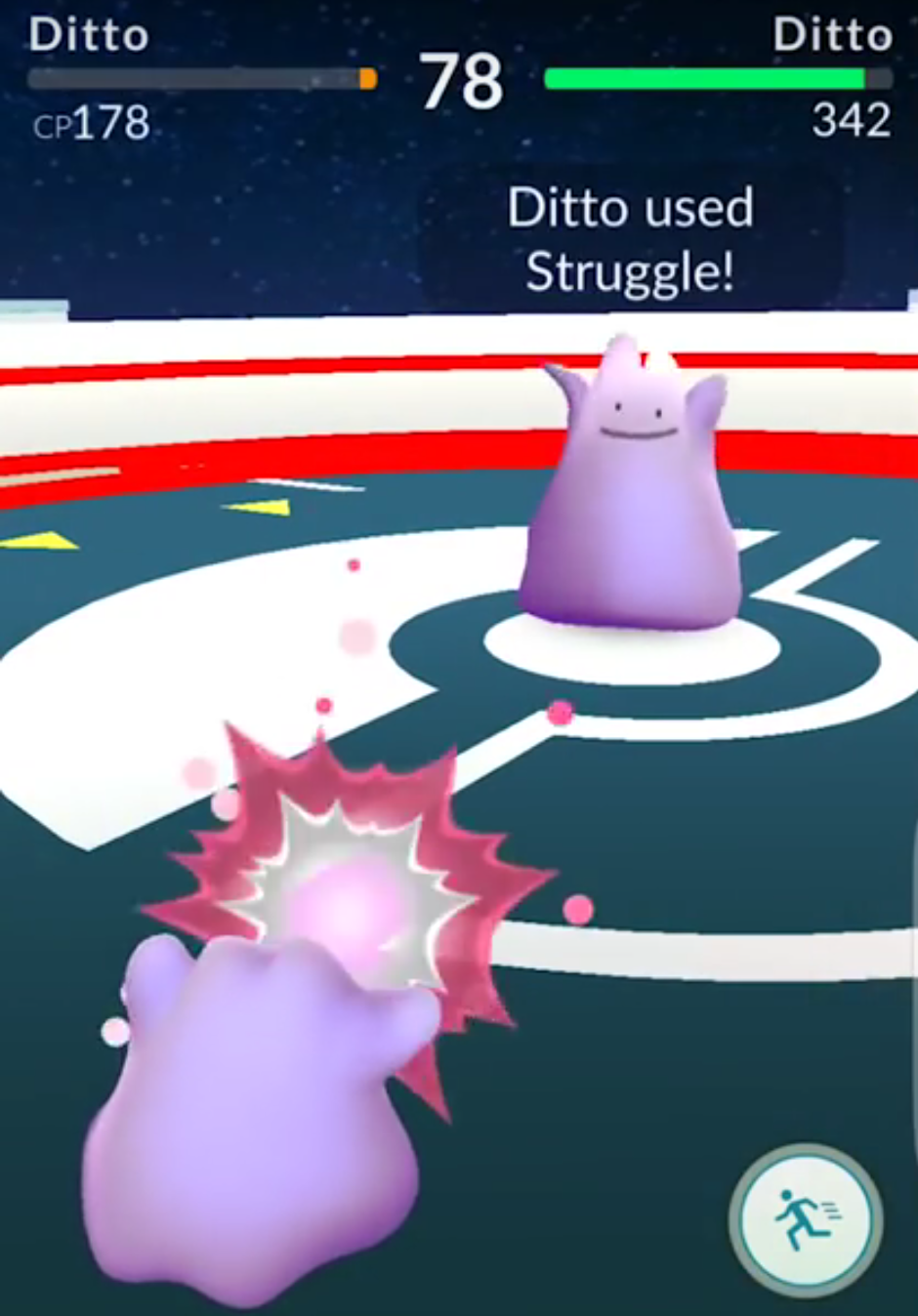 They’ll use the Struggle attack over and over against one another until one of the Dittos finally wins. This may take a while since the attack only does 15 damage. Since there’s nothing to transform into, they’ll stay in their purple blob form.

If you’re not already playing Pokémon GO, you can download the game for free from the App Store.

Have you caught your first Ditto yet? Share in the comments!